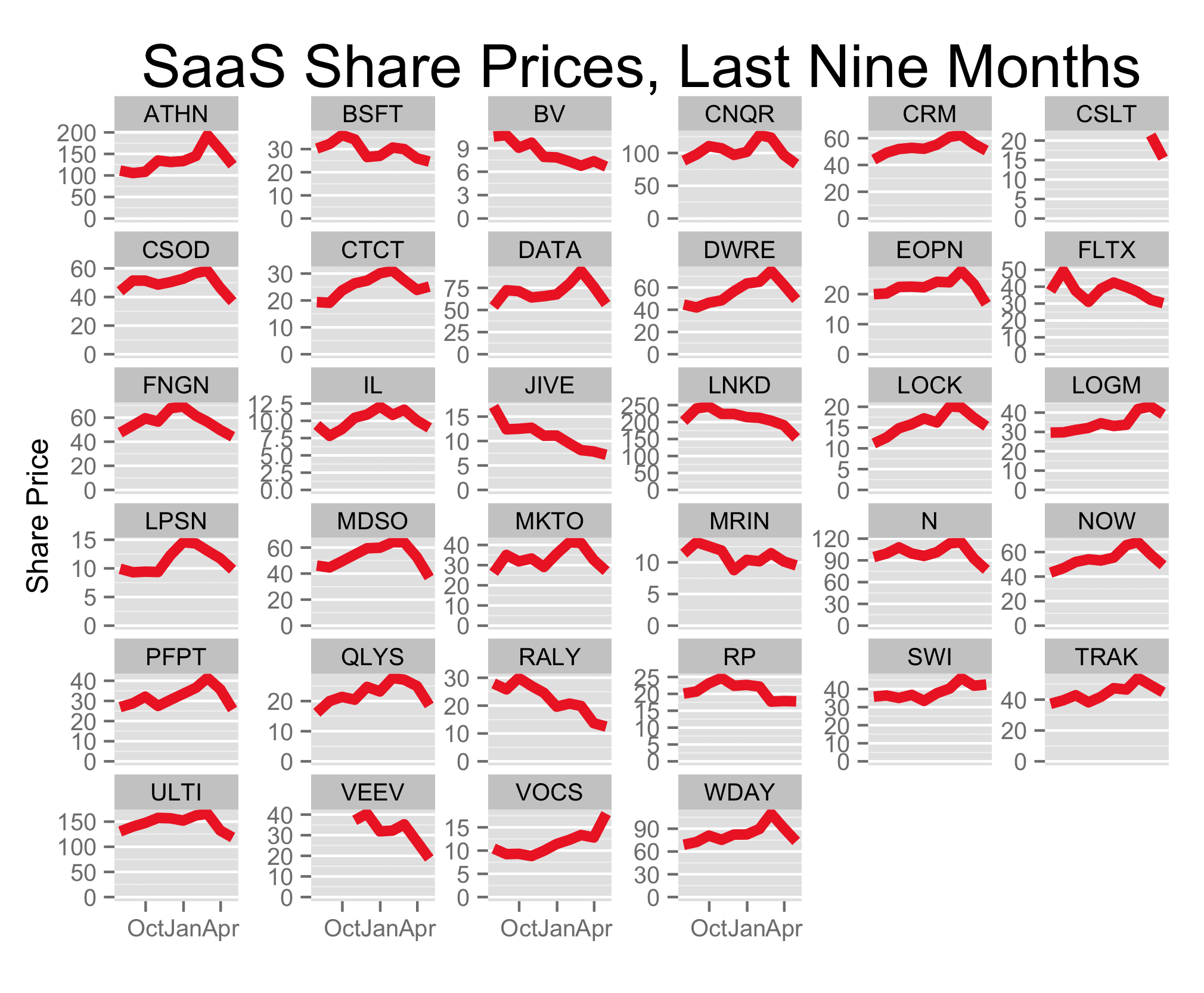 What a difference three weeks make! Since I wrote “The Correction in SaaS Company Valuations”, SaaS company valuations have continued to fall. As a basket, SaaS companies have fallen 33% from their highs (median), wiping all the gains for the last year.

To make that point more explicit, below I’ve charted the total value of public SaaS companies over the last ten months. In that time period, the aggreggate enterprise value has fallen from greater than $150B to $117B today. 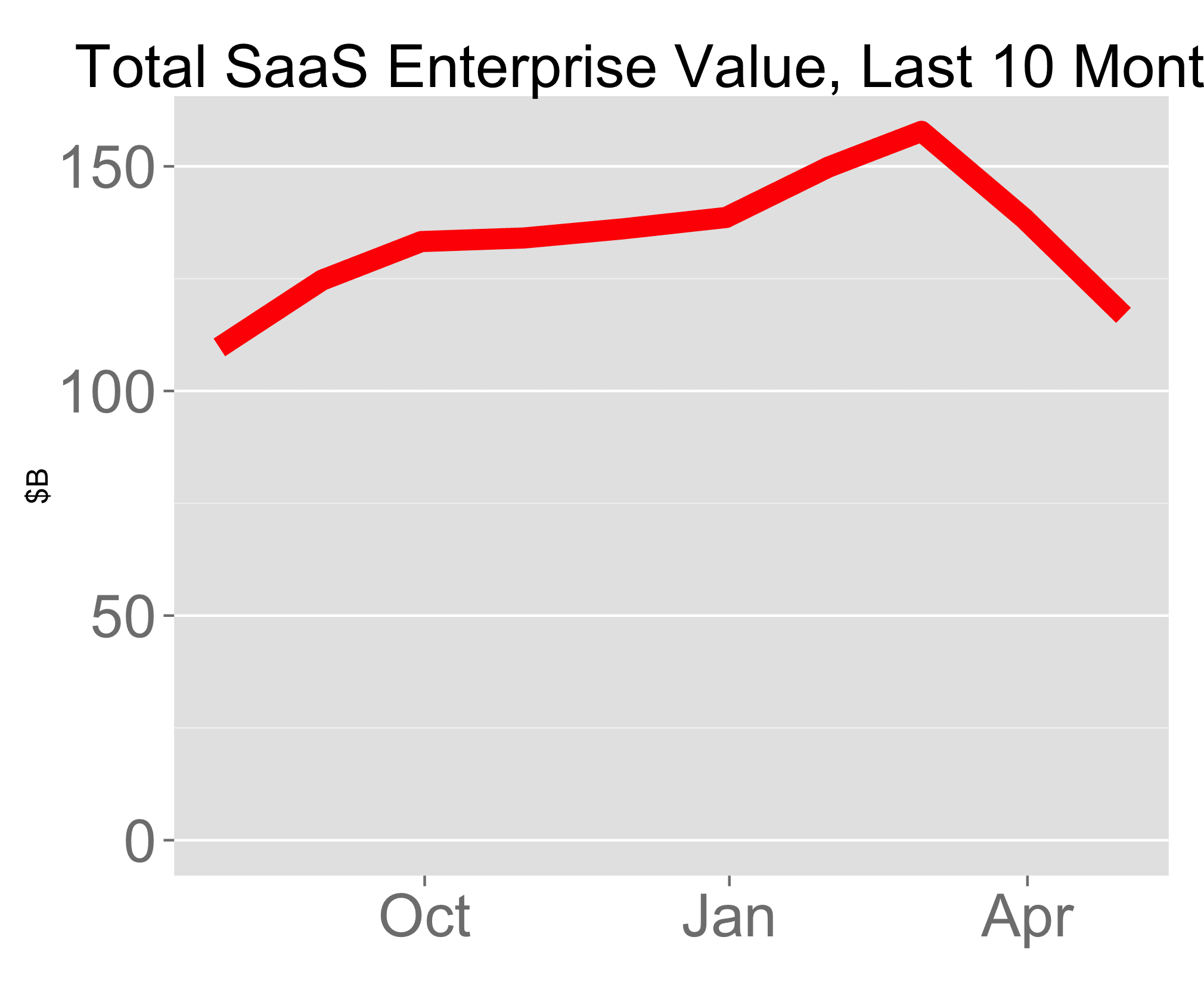 And these share price decreases have been distributed across all the basket of SaaS companies. Below is the distribution of share price changes from the 10-month highs, which doesn’t quite follow a uniform distribution, but shows that only one stock is currently at its 10 month high. The others are off on average about 30%. 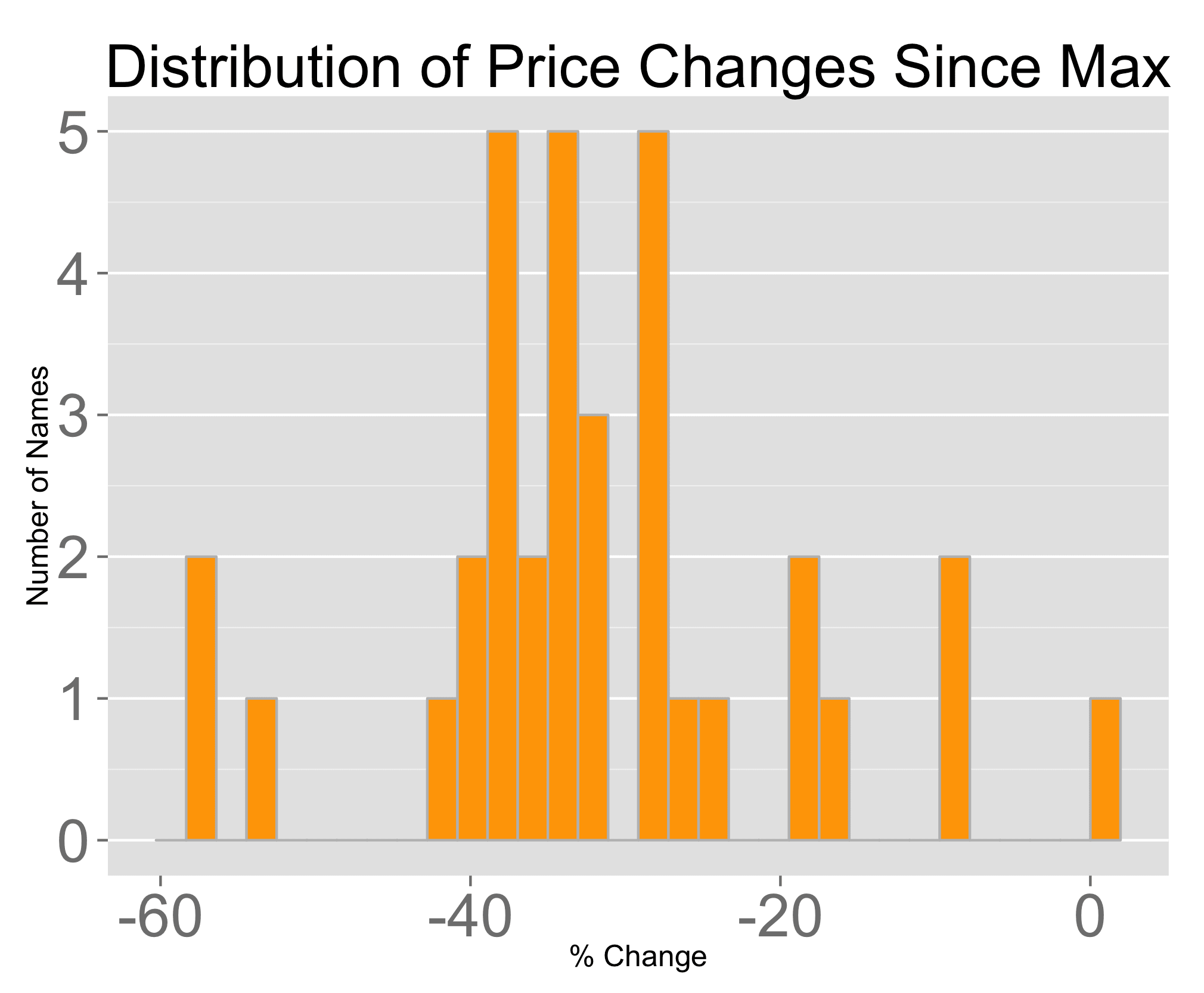 It would be hard to claim the underlying businesses have worsened since February. To my knowledge, none of these SaaS companies growth trajectories have changed nor has the business environment entered a less fruitful period. Netsuite, Marketo, ServiceNow have each announced better than consensus earnings.

Why is the correction happening then?

I believe it’s a reversion to the mean. Public institutional investors are rotating from growth stocks to value stocks, because growth stocks multiples have far exceeded long term norms. Let’s look at the ratio of Total Enterprise Value (TEV) to Next-Twelve Months' (NTM) Revenue during the past ten months. The chart below shows that data. The ratio grew from 6x to 8x before falling to 5.3x in April. 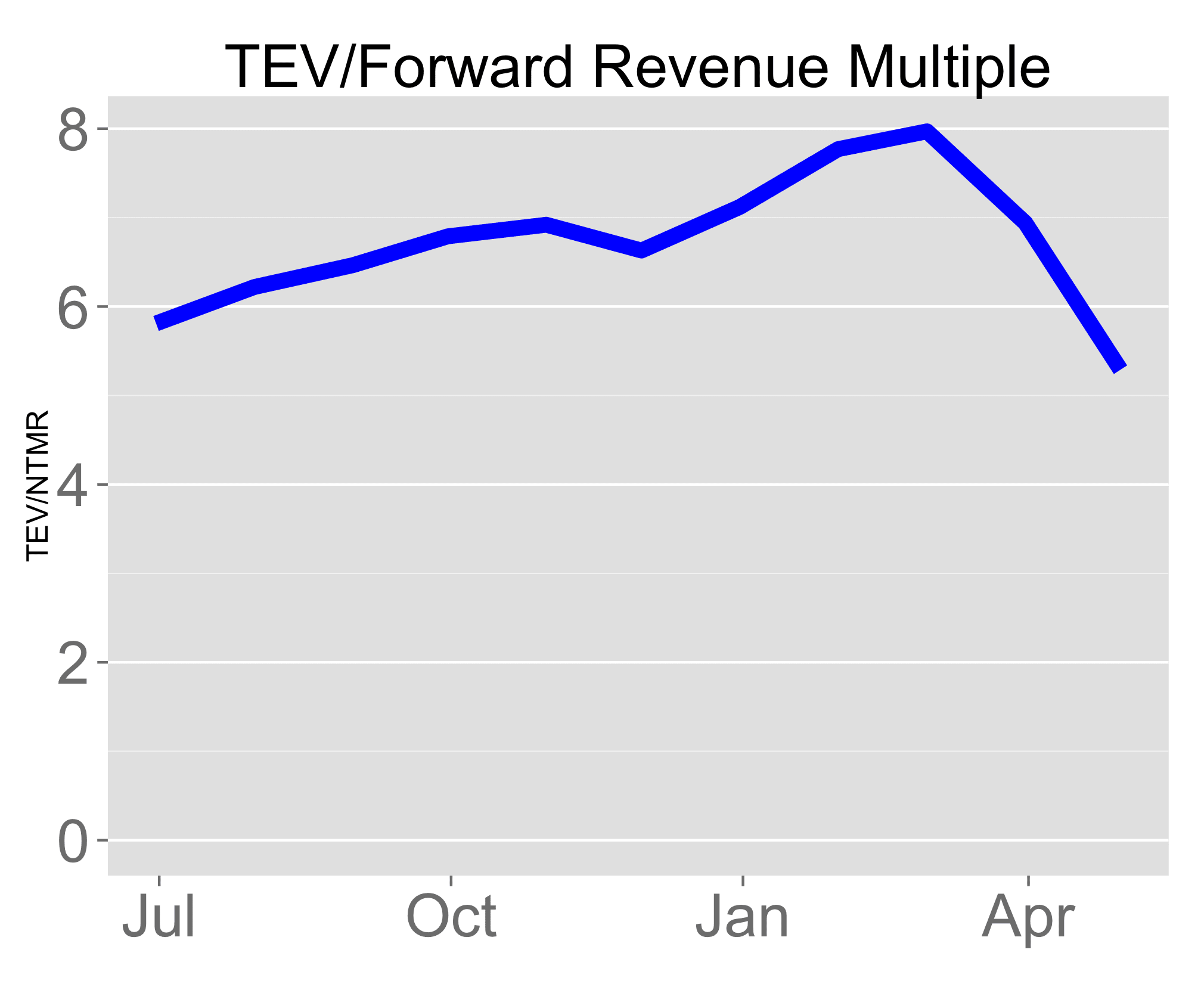 Let’s put those figures into historical context. Over ten years, the median TEV/NTM Revenue, the blue line, has been 4.9x, the black line, far below the 7-8x of recent months. During the financial crisis, that number fell, but a year later SaaS companies suddenly began to appreciate dramatically in value. Throughout these past ten years, and despite the fact that the basket of stocks has changed, the median has been 4.9x. At their lowest point in 2009, the basket reached 2.8x.

I think it’s unlikely we touch the lows marking the financial crash. Because the publicly traded SaaS companies continue to grow and because the economic environment is relatively stable, I’d argue the multiples will revert to right around the median, in the 4-5x range. 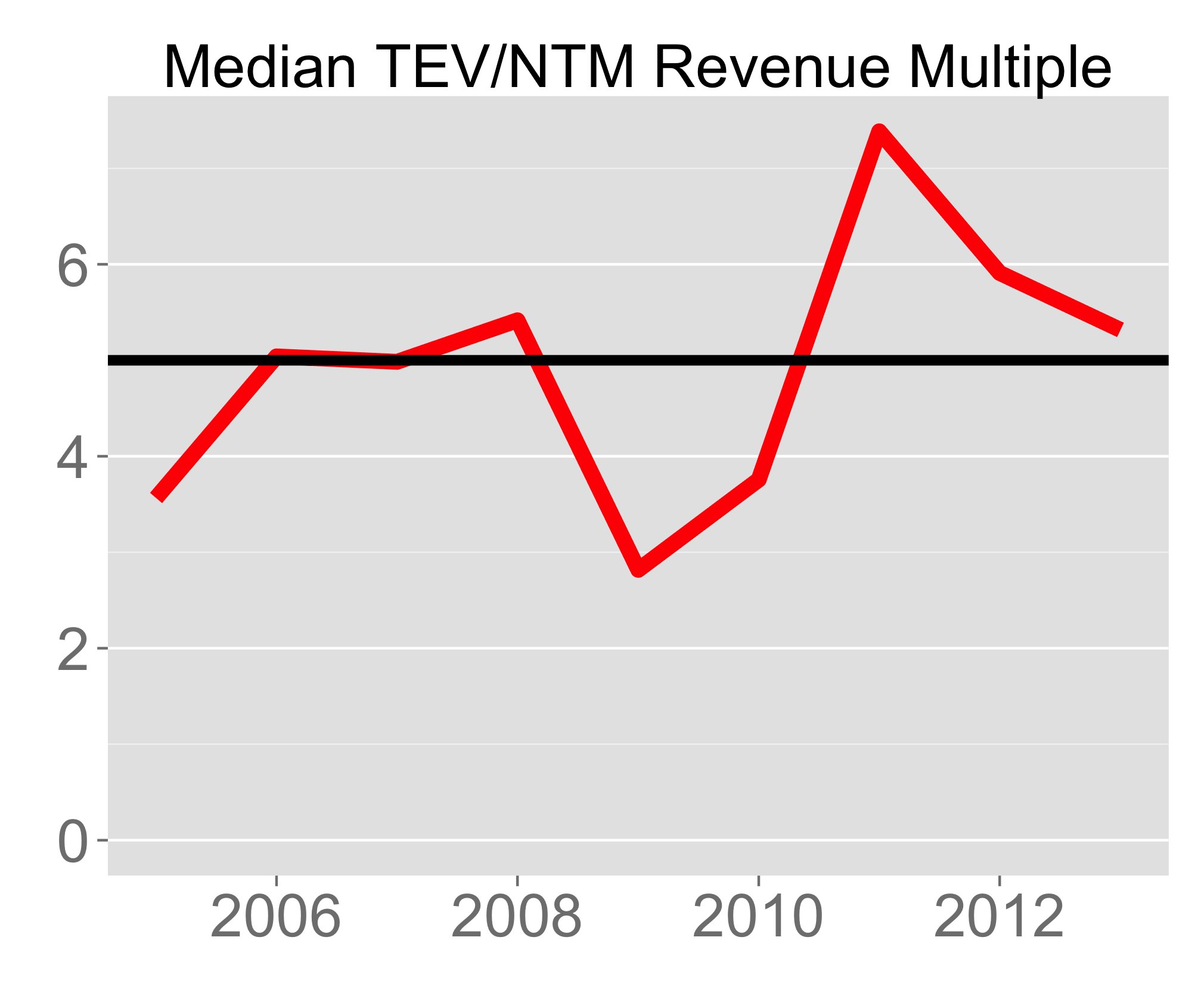 This data supports Jason Lemkin’s contention that SaaS valuations could fall by up to 50%, if the public and private markets move in tandem. There are a few important implications of these corrections, much of which Jason touches on in his post:

Private market valuations for SaaS companies will likely decrease for most companies in the short term and the sizes of the rounds raised will follow suit. Because cash will become more expensive, some companies may choose to pursue slower growth, lower burn rate models. Some startups may face valuation-to-revenue mismatches when/if they need to raise follow on rounds.

But there will still be a class of outliers which are able to command premium valuations and multiples when raising capital because the market opportunities afforded to certain SaaS categories are so massive, that the disruptive capability of these companies will remain prized in the market.

M&A prices may decline, but I’m not sure M&A activity will fall. The stocks of public SaaS companies have fallen in value so their purchasing power and willingness-to-pay has diminished. But the cash balances of Microsoft ($87B), Oracle($37B), HP($14B), IBM ($10B), and SAP ($5B) haven’t changed. These behemoths will continue to purchase growth in strategic sectors through M&A.

This reversion to the mean is a healthy evolution of the SaaS market. Multiples couldn’t expand forever and instead of a run-up and a collapse, we’re observing a large orderly market correction in the public markets.

Thanks to Brian Cayne and Josh Stein, who inspired this post.