Slack has transformed the way we work. By replacing email with beautiful and simple internal chat, Slack has productized productivity. Founded as a gaming company called Tiny Speck in 2009, the company’s initial product, Glitch, didn’t catch on as expected. So the business pivoted to commercialize an internal tool - a Searchable Log of All Conversation and Knowledge, Slack. Since those early days, the company has grown to employ 1500 employees according to their S-1. The company filed to trade under the ticker SK.

Let’s examine this remarkable company and compare it to Zoom, another recent IPO in enterprise collaboration. Also, we’ll compare metrics to a peer group with similar ACVs. 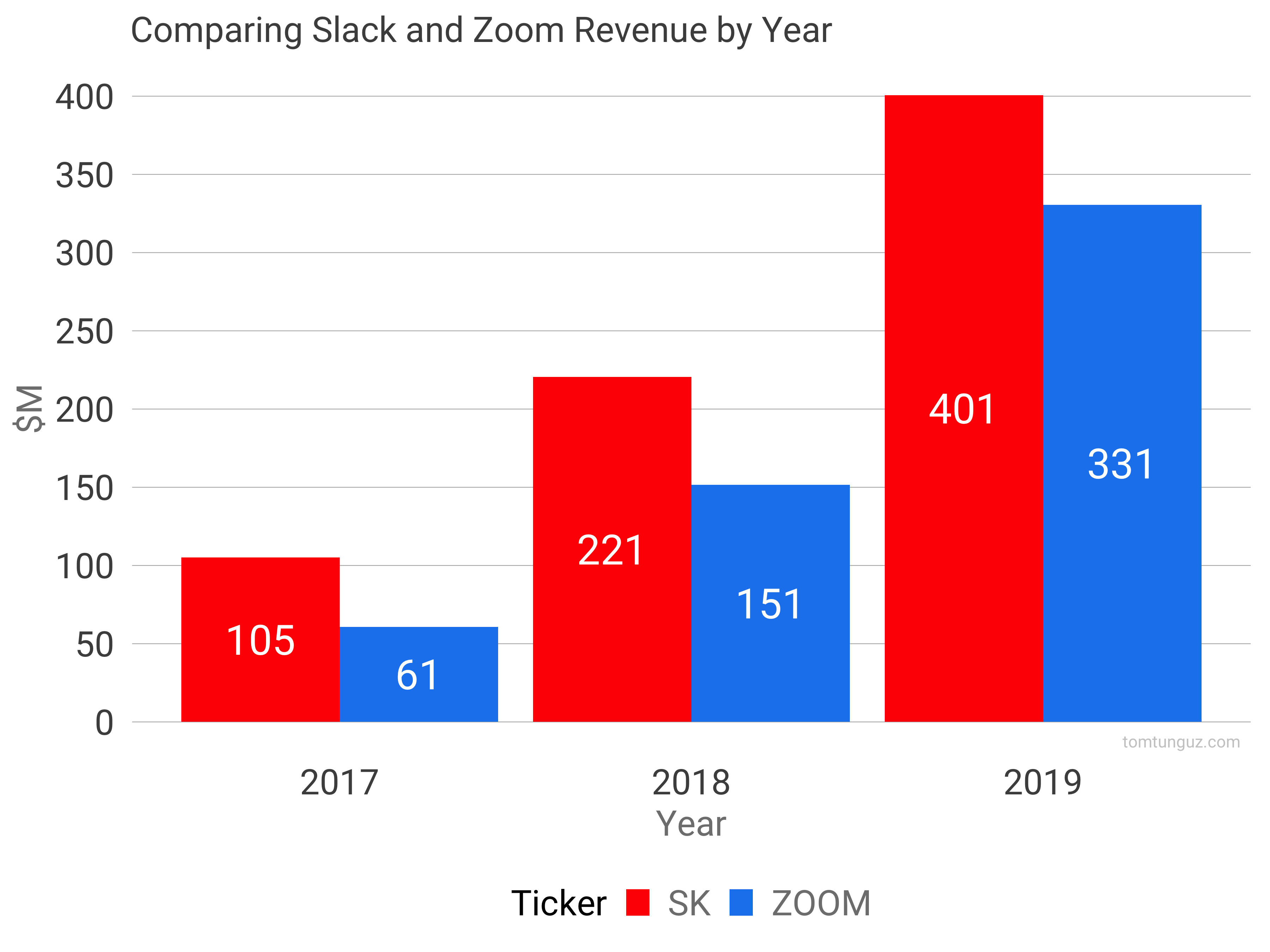 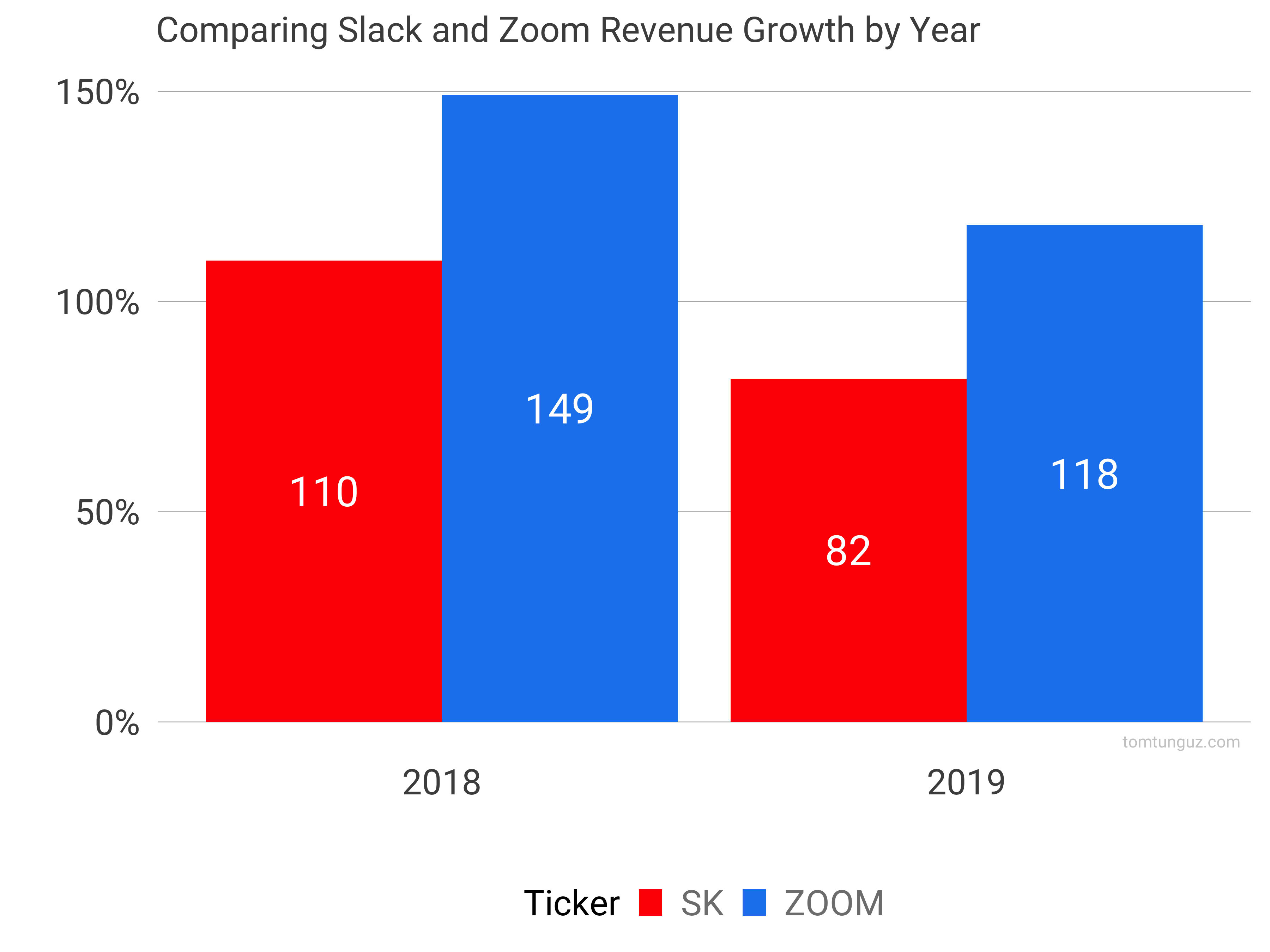 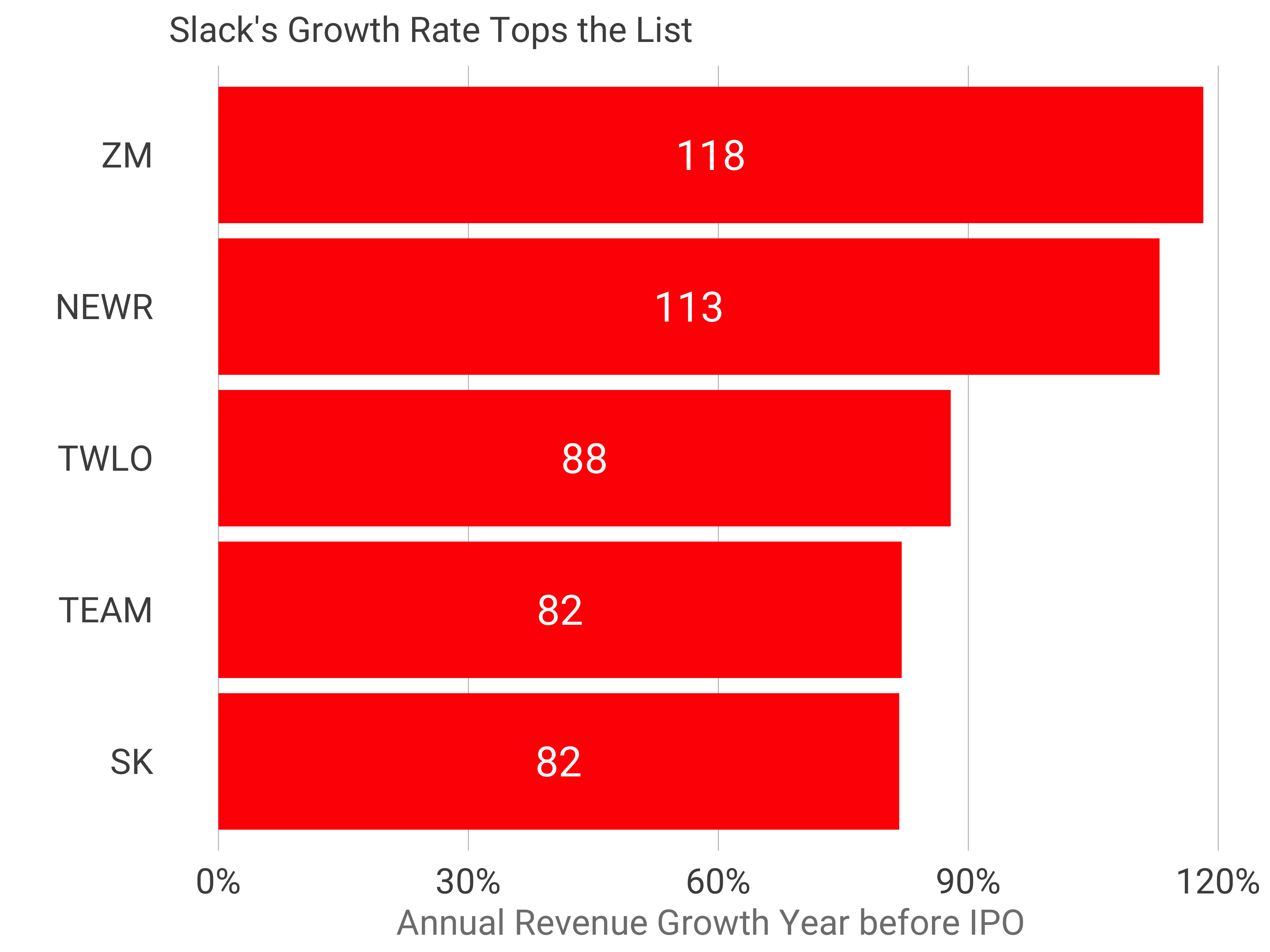 Examining growth rate across a peer set of companies with similar ACVs, Slack has attained a growth rate similar to Atlassian at IPO, which is amazing thing considering the size of the business at the time of the IPO. 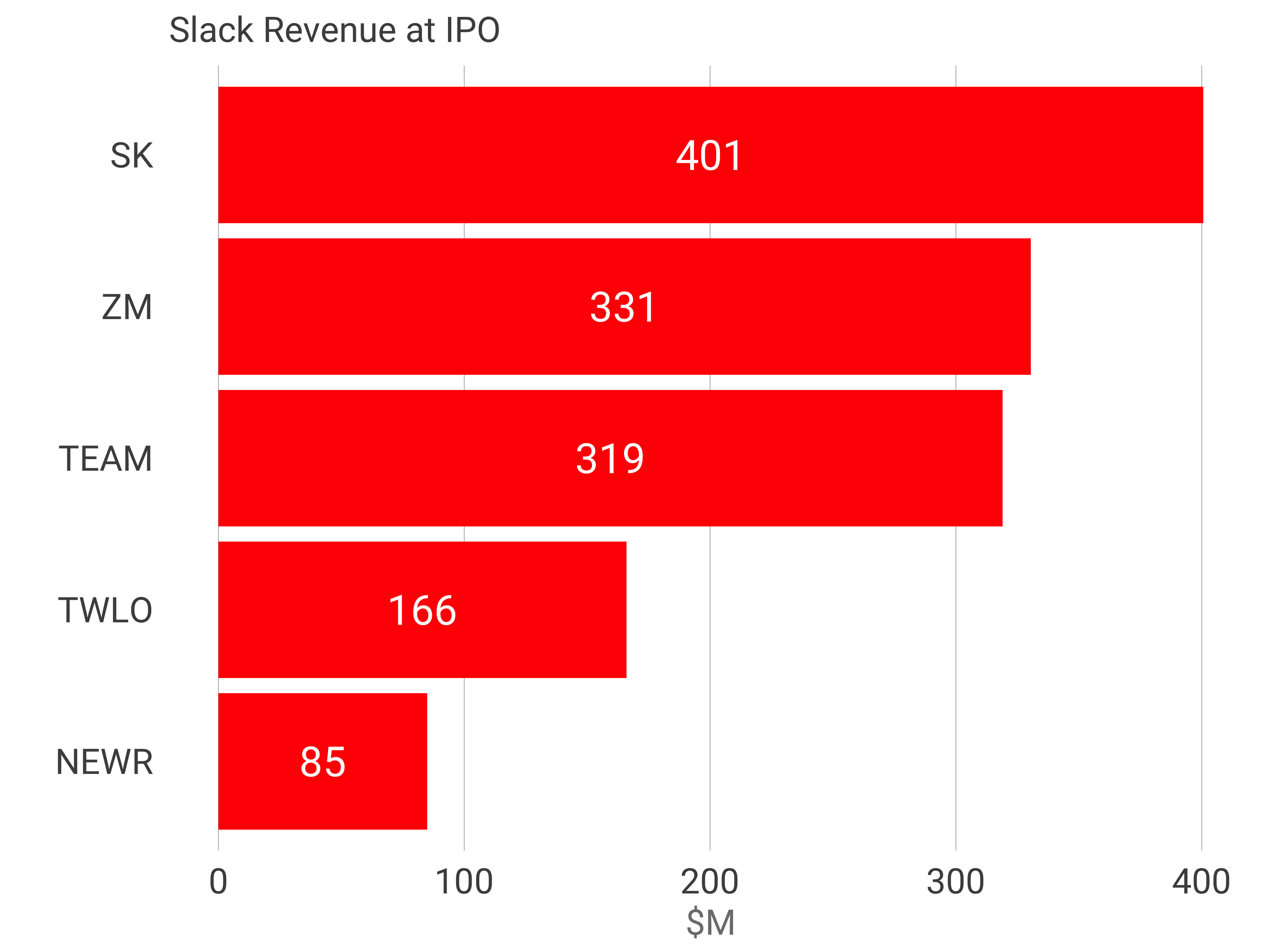 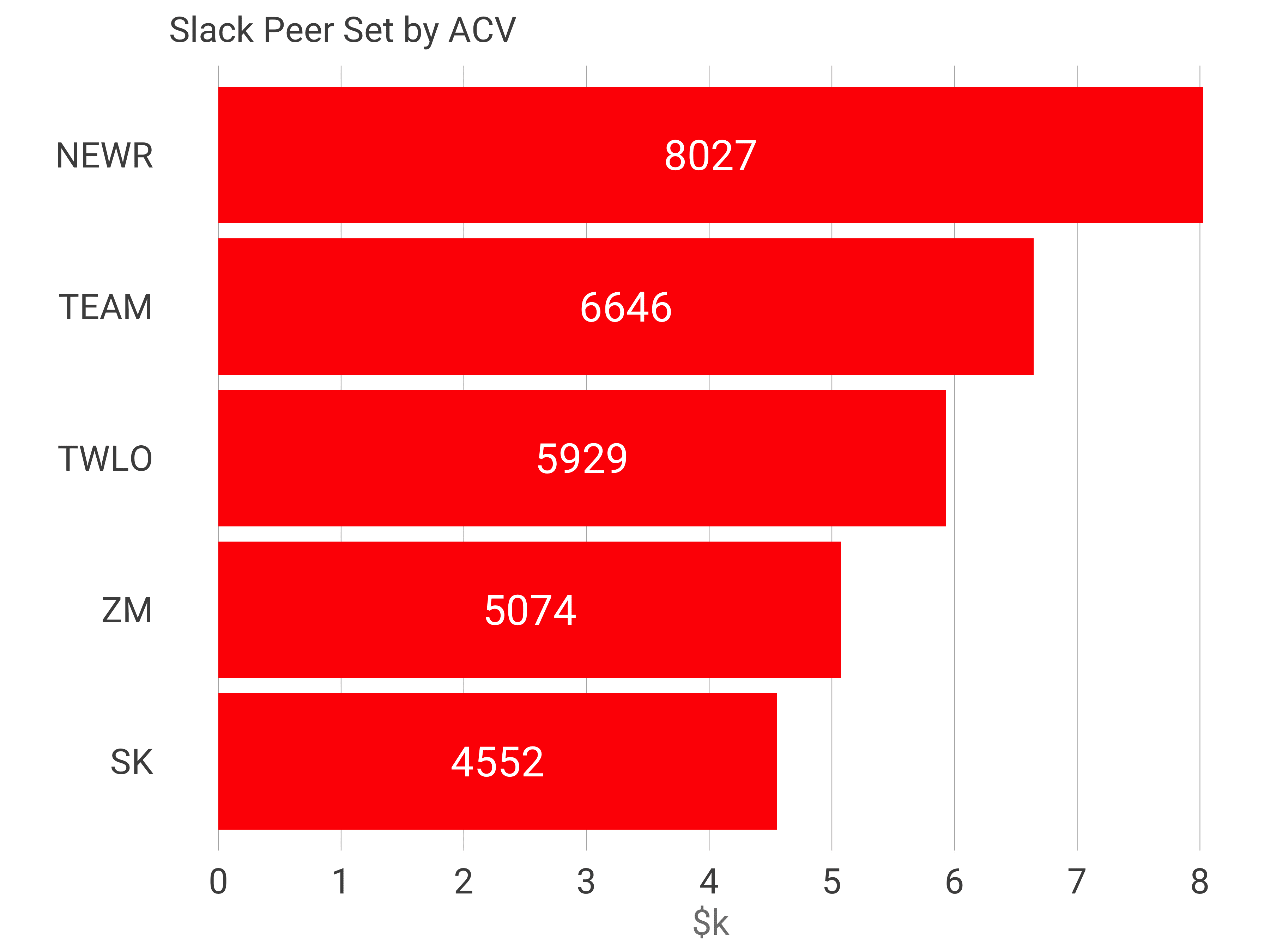 Slack’s average annual contract value is the smallest of the group at $4.6k and closest to Zoom’s. This is an interesting parallel: the two fastest growing and largest collaboration tools of the past decade both pursued bottoms-up strategies.

Slack has approximately 17 users per organization on average (though the distribution likely follows a power law with a few organizations in the tens and potentially hundreds of thousands of seats). The number of $100k+ accounts has about doubled year over year to 575 out of total customer base of 88,000, and these large customers constitute 40% of revenue. 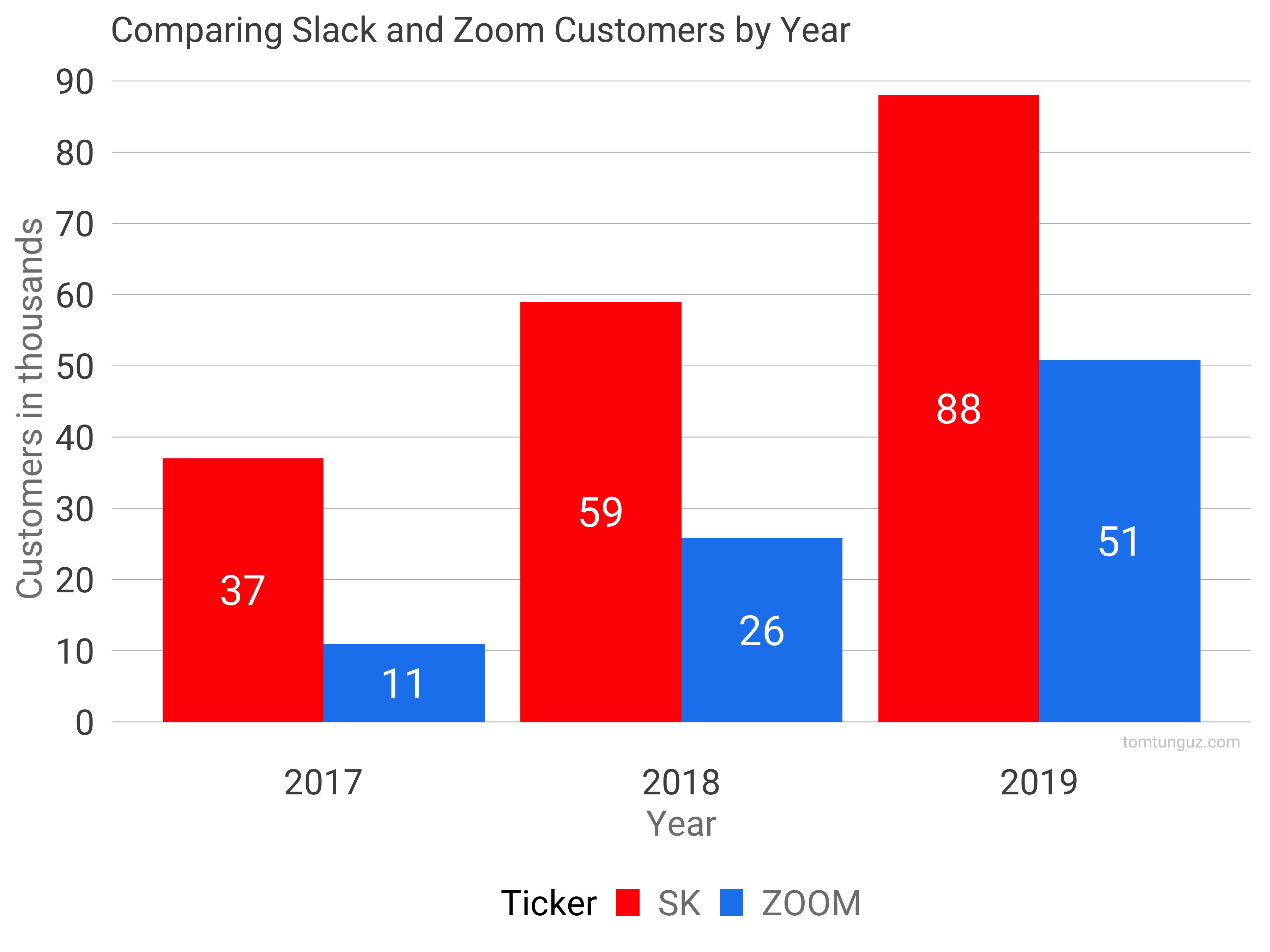 Slack’s combination of greater revenue and a smaller ACV translates into a much larger customer base: 88k customers in 2019 vs 51k for Zoom. 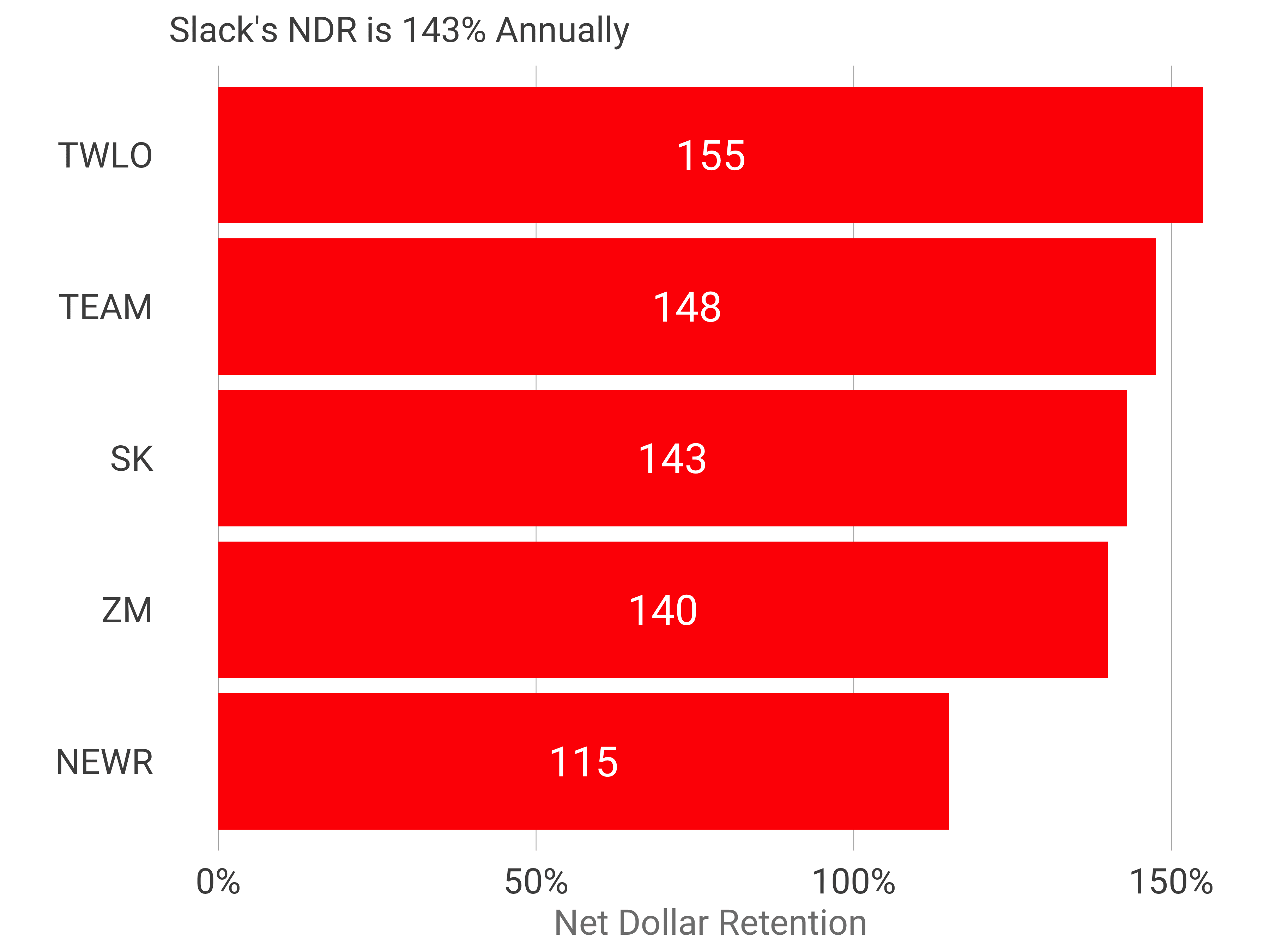 Slack records 143% net dollar retention, which is top decile according to Redpoint’s freemium study, and dead center of the peer group and equal to Zoom. 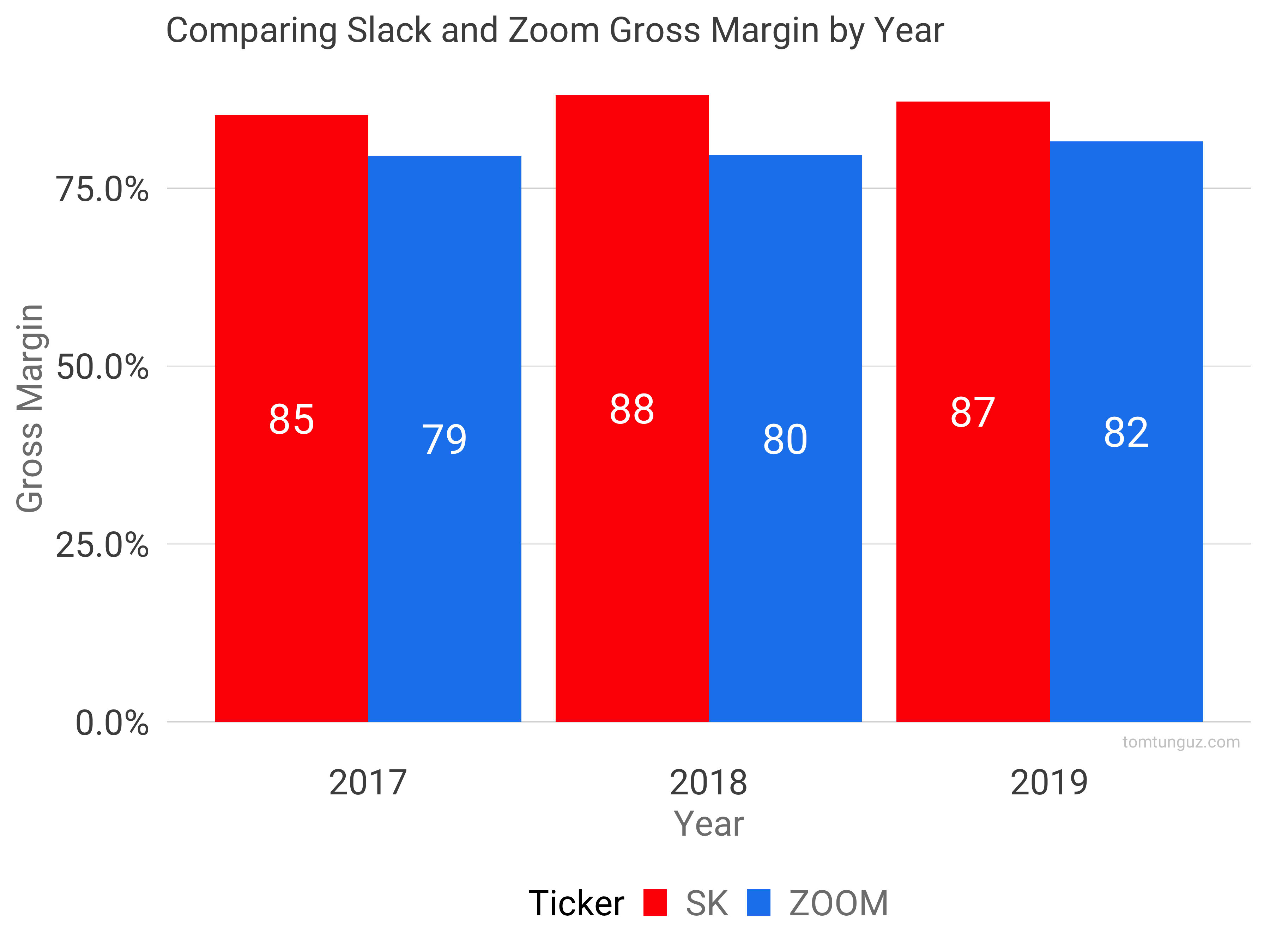 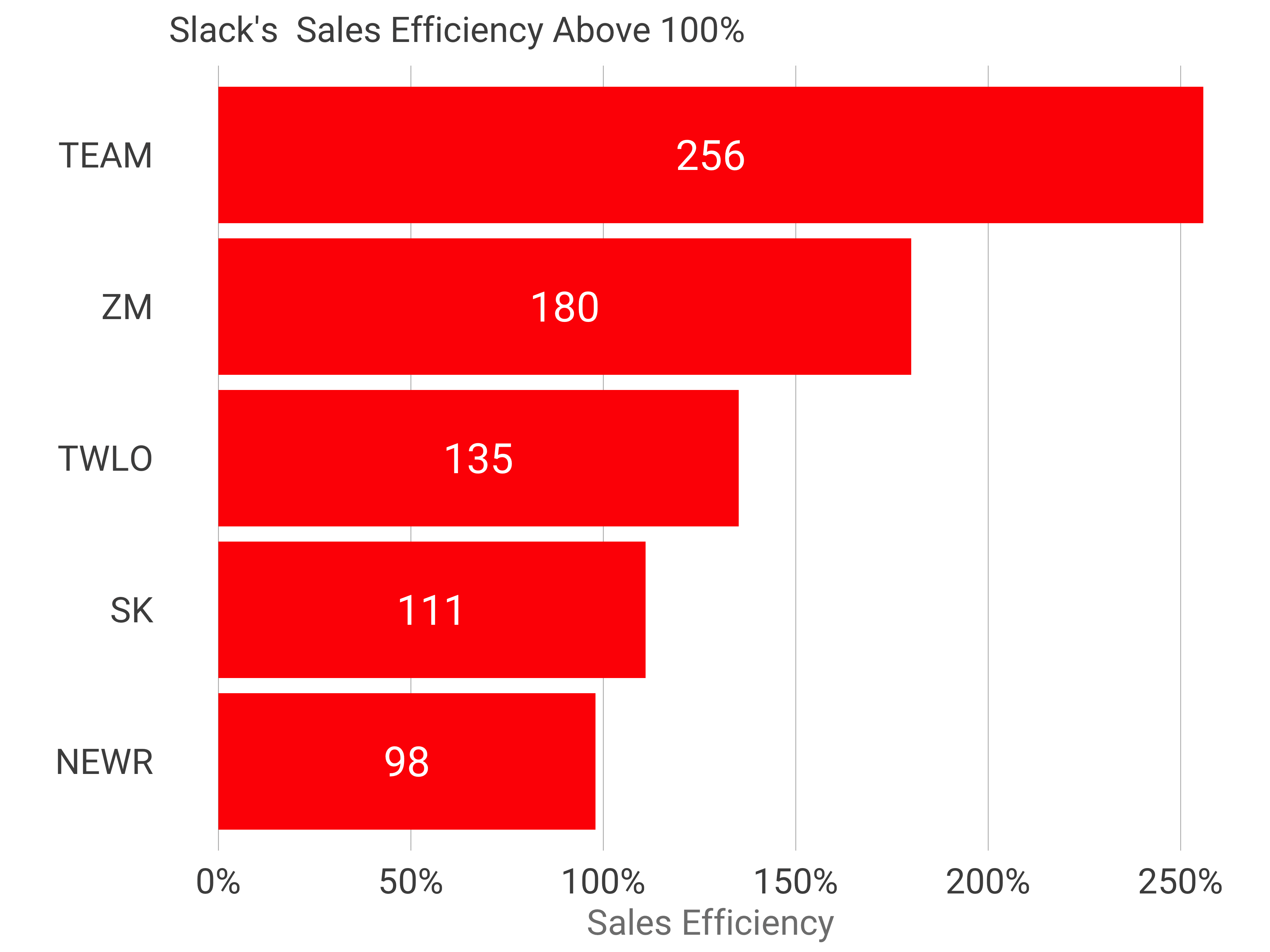 Slack’s sales efficiency exceeds 111%, which is sensational. One dollar of sales and marketing spend today generates $1.11 in gross profit next year. Zoom’s sales efficiency is at 180%. One hypothesis to explain the difference: Zoom is externally viral while Slack is internally viral; we send Zoom invitations outside of our companies, but Slack messages to our colleagues. 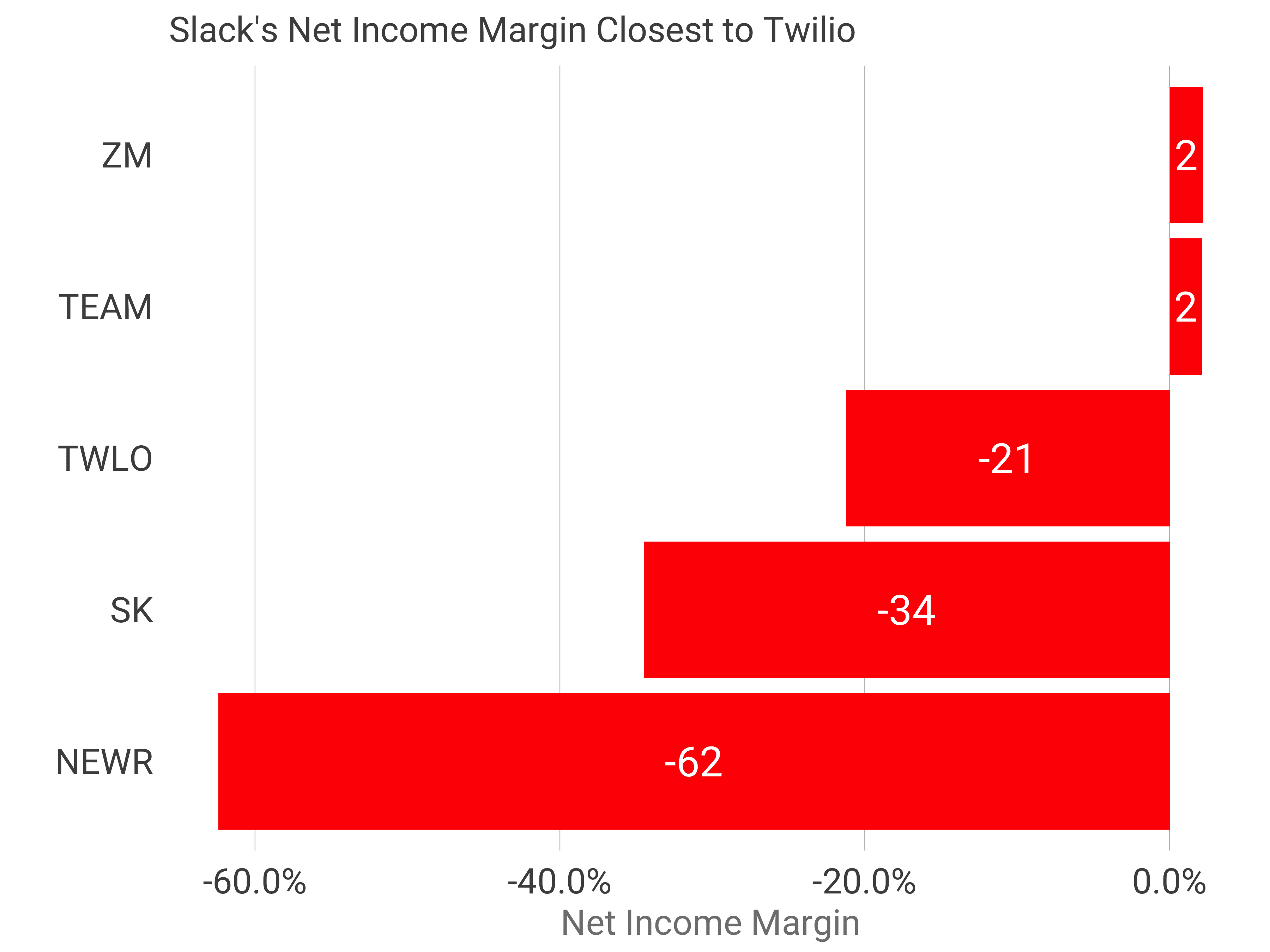 In terms of net income margin/profitability, Slack is closest to Twilio at -34% net income margin. The company has been operating the business consistently at -$40m in net income for the past three years, as revenue has grown from $105m to $401m, and the net income has become decreasingly negative with time, a positive trend.

As I wrote about in the Zoom S-1, Zoom has generated profits throughout its growth. There are two major drivers of this profitability. The first is the sales efficiency, mentioned above. The second is Zoom very efficient R&D expense because the majority of its engineering resides in China. 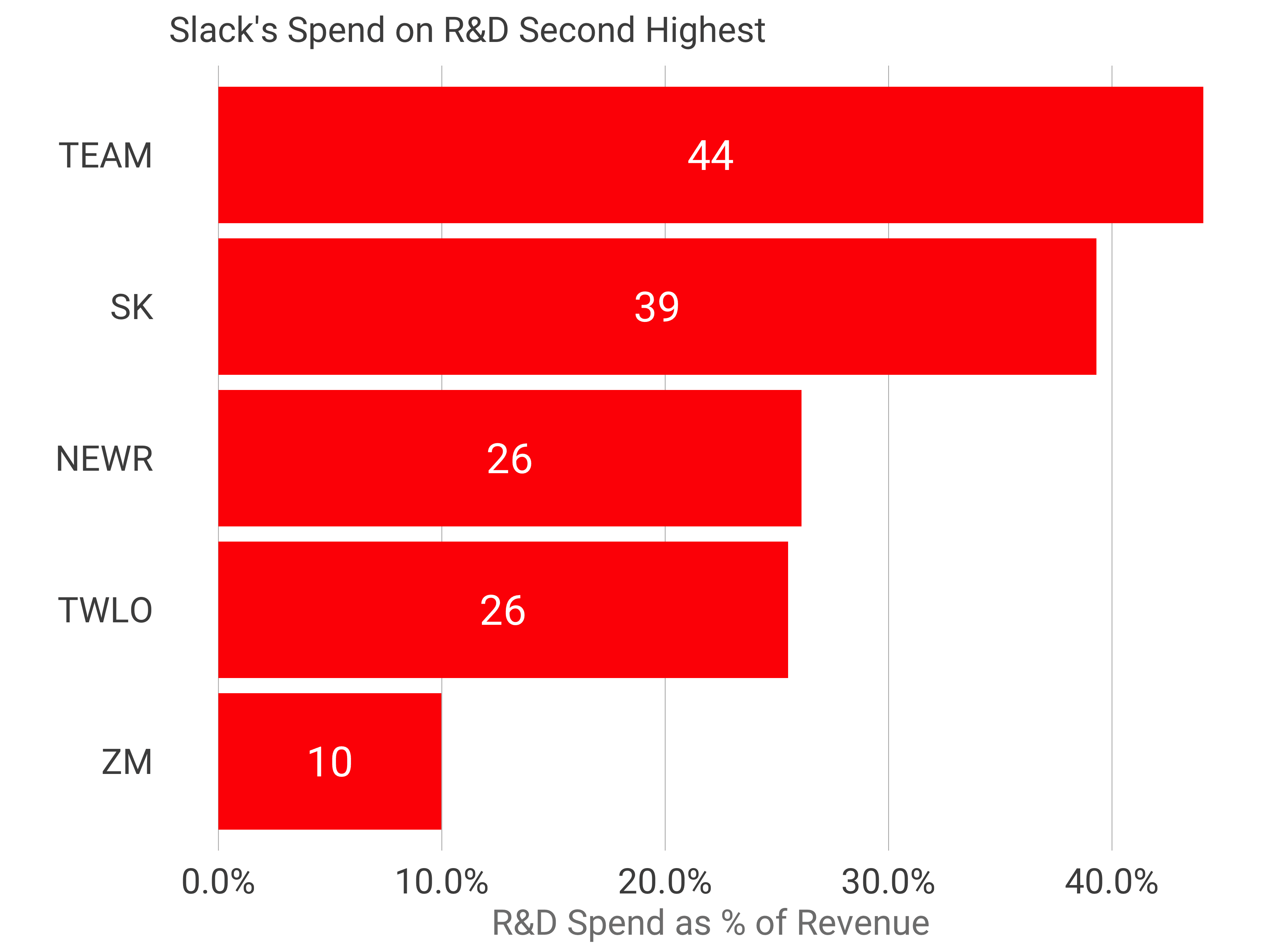 Slack’s business is a marvel of scale, expansion and growth. It’s going to be an exceptionally valuable business. Congratulations to the Slack team on building an incredible business.