The Inflationary Forces in Startupland

Over the last ten years, the 75th percentile post-money valuation of a cloud software or infrastructure company has grown 11% annually. In 2021, the post-money valuation has spiked 60% from $48.1m to $77.0m. While not as hyperbolic an inflation rate as copper or lumber, the price trajectory of early stage cloud startups does result from a similar supply demand/imbalance. And this isn’t the first time annual valuation deltas have touched this magnitude. 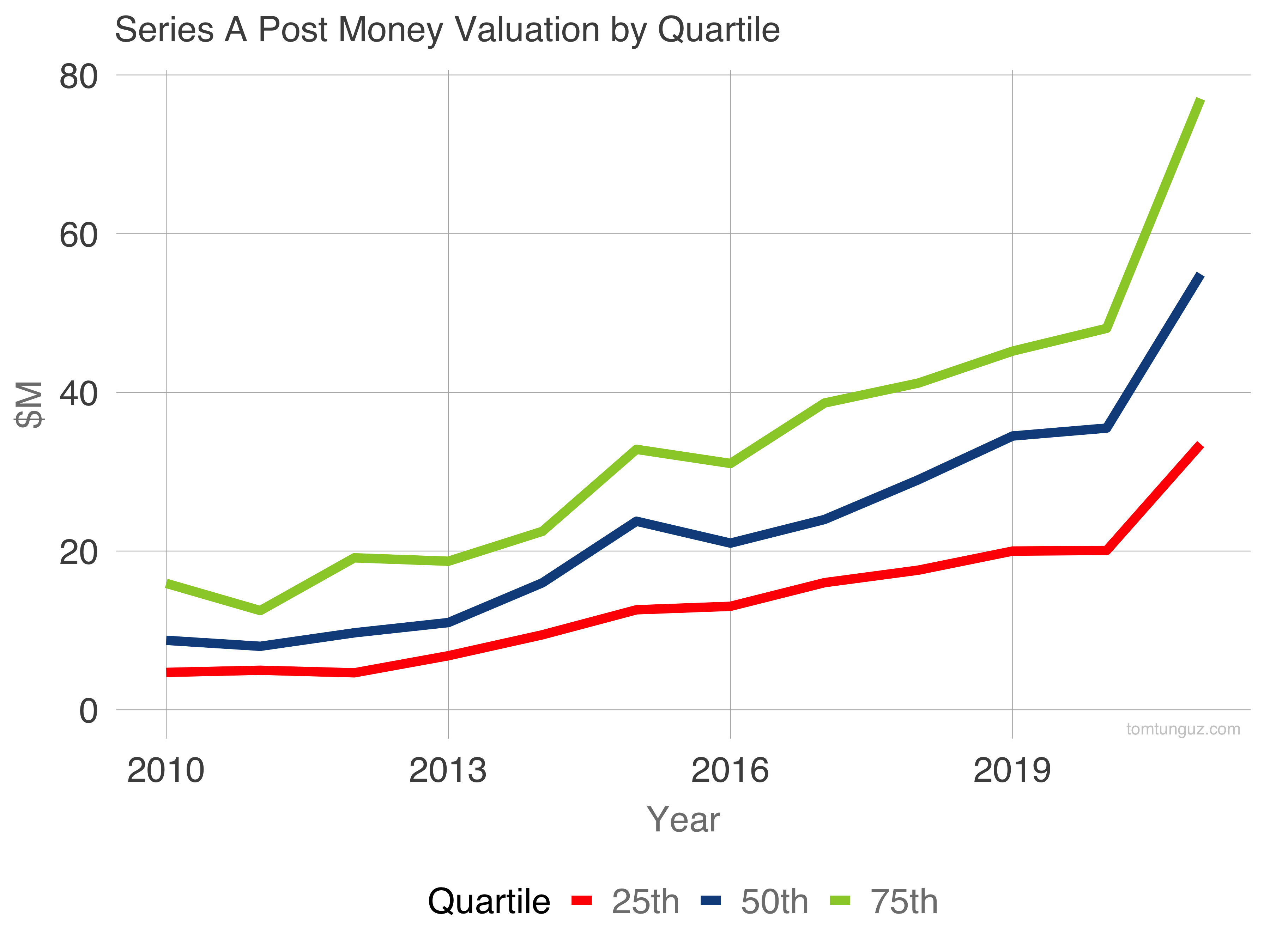 I’ve plotted the post-money valuations for US cloud and infrastructure companies above for the Series A. Each of the three quartiles have inflected in the first 5 months of this year. 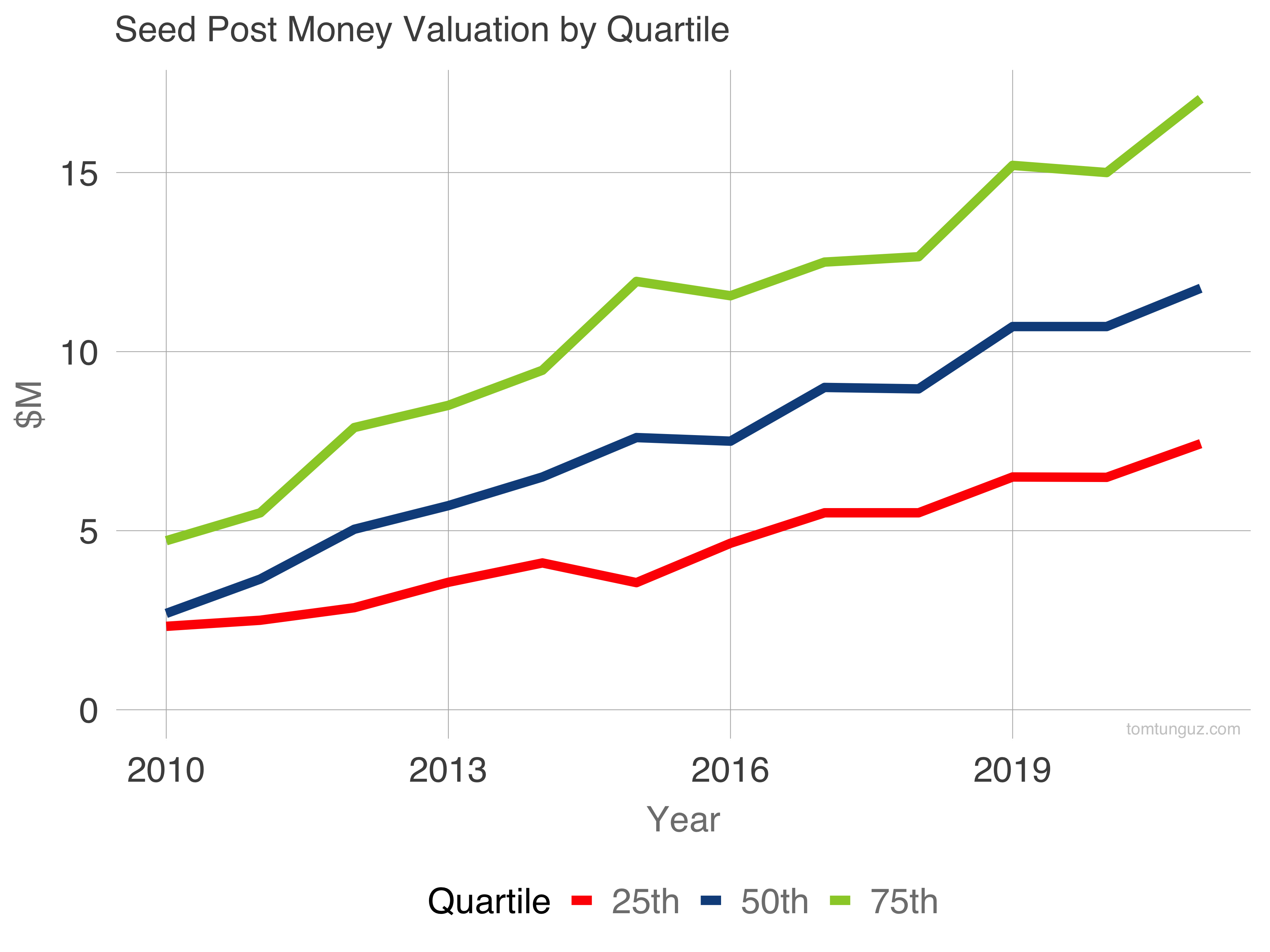 The seed market compounds at a higher rate over the same decade at 15%. But it hasn’t soared like it’s older brother in 2021, preferring a more consistent path. 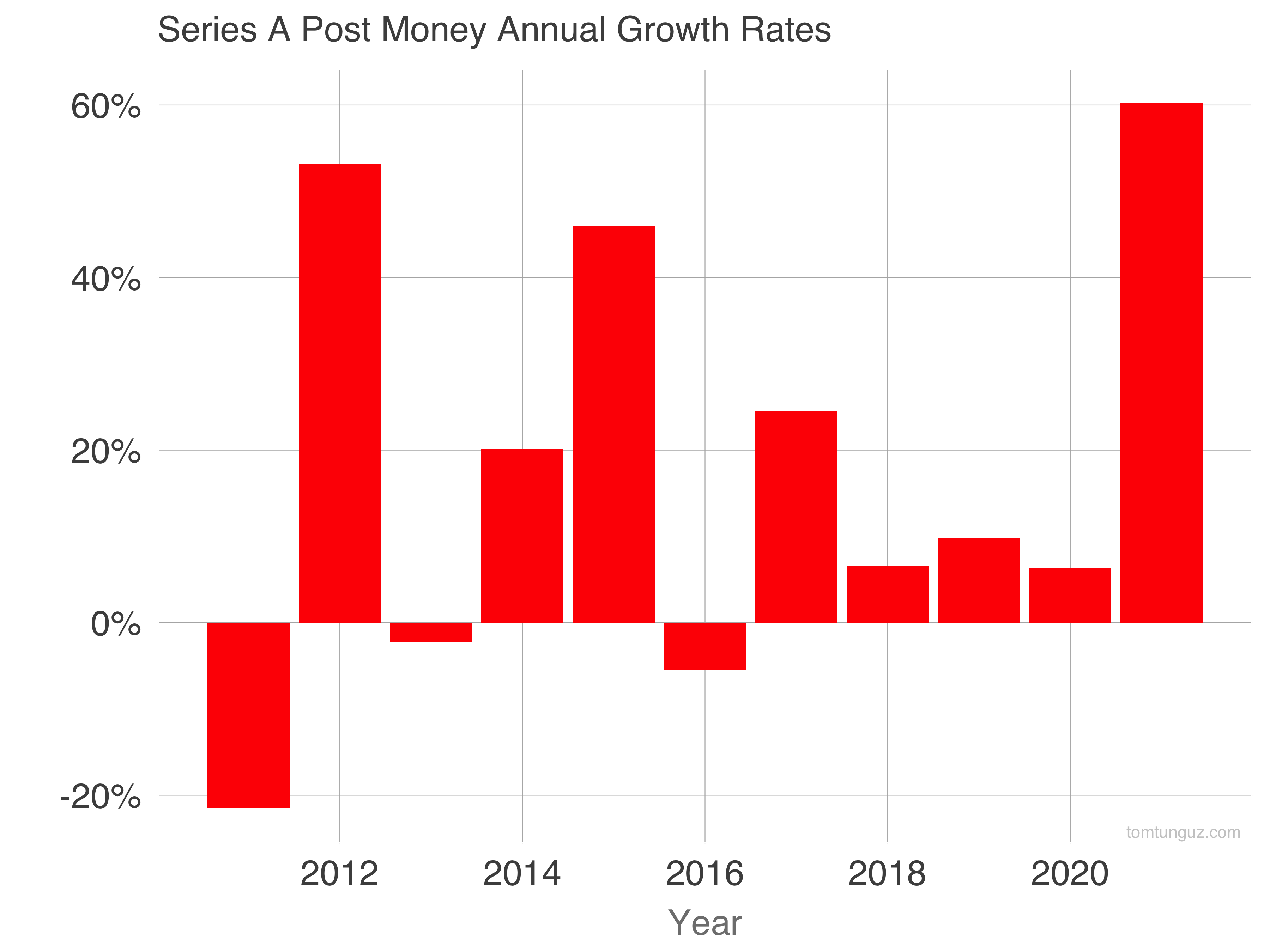 If we plot the annual growth rates for the 75th percentile Series A, we observe the expansion in valuations occurs in fits and starts. 3 of the 11 years recorded 40%+ growth. 3 of the years saw declining prices.

Perhaps these prices are tied to blockbuster IPO markets. 2012: Facebook. 2014: Alibaba. 2021: Snowflake (late 2020), UIPath, Airbnb, Doordash, Coinbase. Or there’s always the definitional argument to be made: the Jacobs ladder in which Series A is the new Series B and seed is the new Series A.

But there’s more to this trend than just nomenclature change. The market feels different. Investment processes last a few days. Preemptive rounds have become a norm. Straight to Series A (skipping the seed) isn’t uncommon, particularly in infrastructure or open source commercialization efforts. Pricing rounds on multiples like public market investing. Vibrant secondary markets. Index investing and the entrance of hedge funds. That’s the demand side.

But the supply side of the market has evolved just as much. Founders’ sophistication has increased in the US - and also globally. Many run auctions effectively, and pick the right partner conducting similar diligence to the investors themselves. Rather than burn dictating when to raise capital, founders elect to raise when inbound interest arrives, or immediately before launching to sell the dream rather than the metrics, or at other strategic inflection points. The conversation of how long capital will last, which was ubiquitous is mostly debating during seed rounds, if at all. This has as much to do with novel GTM strategies, better product-market fit, and the consequent greater leverage in businesses, as does the demand side.

A few years ago, raising a large venture round anointed a winner. Balance sheets swelled to permit management teams offensive and defensive options. Today, large rounds and unicorn valuations are (and this might sound jaded) expected, normal, part of the game. As often happens in financial markets, players find an edge, exploit it, and in time the players copy it in aims of achieving the same success.

Is it good for the market or bad for the market? That’s the wrong question. It’s tough for buyers and great for sellers. Founders have access to more capital, faster, and more consistently than they ever have. The market rewards those with big ideas and momentum, earlier and earlier.

The game on the field has changed in the last year. The data is a lagging indicator, but it does show how quickly and how significantly pricing has skyrocketed, the effect of evolution in both supply and demand in the venture capital marketplace.

The One Force that Will Govern How We Return to Work