In May 2010, I bet a good friend of mine that Android would overtake iOS in total devices shipments in 12 months' time. My prediction was completely off the mark. In May 2011, iOS led cumulative shipments by more than 100%: 191M to 95M. It would take another 10 months for Android to equal Apple in March 2011 at about 325M each.

Race to one billion devices

But Android reached this milestone in a way I didn’t anticipate. I expected a clean division between the high and low ends of the market along OS lines.

Apple starts up-market and discounts for the down-market

Surprisingly, Android has been competing successfully at the high end. The Samsung Galaxy line has sold tens of millions of units. So have the Motorola Droid phones which have similar price points to the iPhone.

And Apple has been discounting older models of their devices to to win the low end of the market. In fact, Apple has a mobile product at every $50 price point between $0 and $850.

As Android wins the market share war, commanding 75% market share of devices, Apple reaps 71% of mobile hardware profits. And those margins are increasing as the company drives leverages economies of scale.

Android’s lead will continue to grow 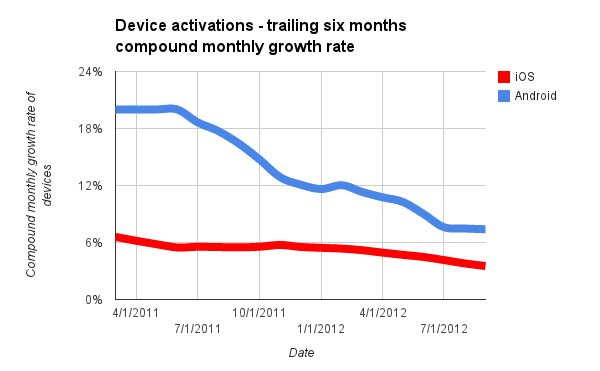 Despite this pricing strategy, Android has surpassed iOS in devices - a change that will likely never be reversed because Android activations continue to grow at a faster monthly growth rate than iOS, even as Android’s device activation count increases.

Potential for huge growth in Android tablets despite slow start

Tablets are a key growth factor for Android - a form factor I worried would be a challenge for the OS. 40% of Apple’s mobile devices activated in Q3 were tablets. Should this ratio hold for Android, then there could be a 4x upside in Android tablet shipments.

A battle on many fronts

The end result is the same as many forecasted: Android has become the market share leader and Apple has won the lion’s share of profits. But the path has been much more nuanced than I expected.

A great entrepreneur can come from anywhere