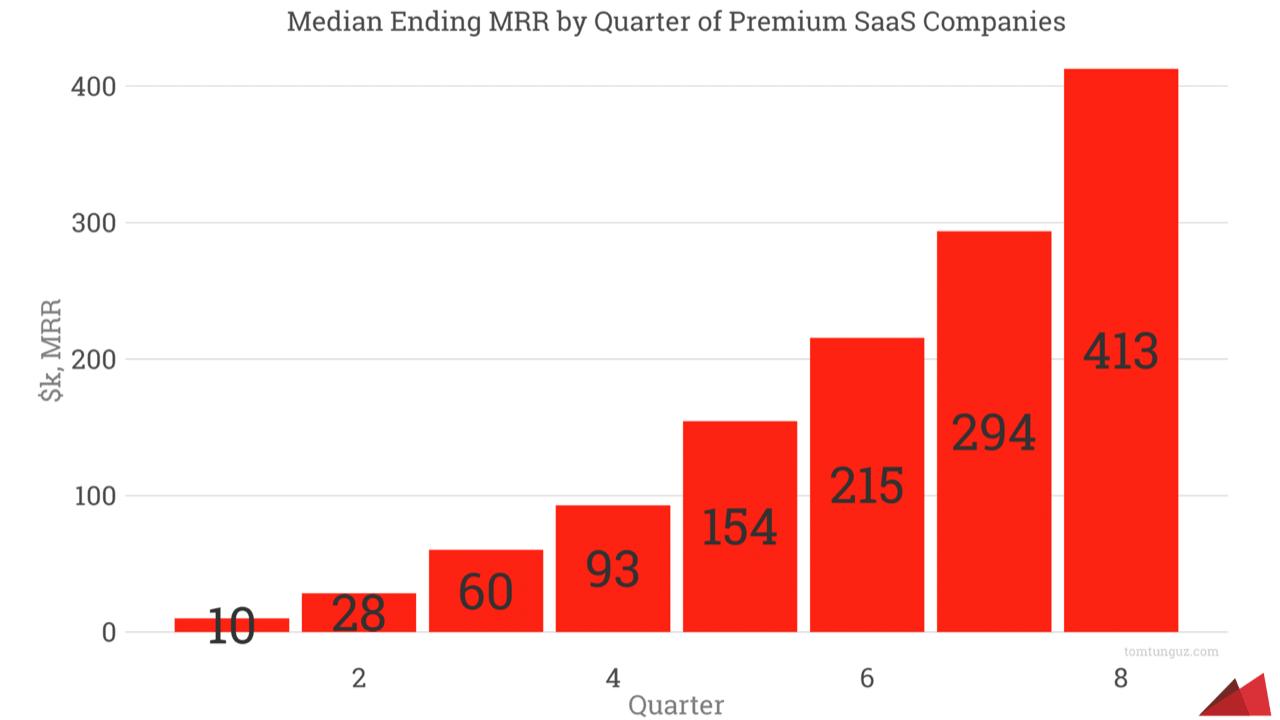 At SaaStr 2016 and SaaS Office Hours in New York, I shared an analysis of the fastest growing SaaS companies over the last 3 years. In particular, I benchmarked the revenue, growth rates and round size characteristics of these businesses at their Series A. I’ve embedded the slides here.

These are the key bullet points from the deck about exceptional SaaS companies. Note: there are two key statistical biases in this analysis: survivorship bias and sample size bias. This analysis considers only a small fraction of the total number of SaaS companies.

These businesses grow from 10k to 93k in MRR in their first year of commercialization and then to 413k of ending MRR in their second.

On average, they raise $9.5M in Series A, though there is a range from smaller rounds of $3M to rounds of greater than $20M. That range is more indicative of the breadth of different rounds the market calls Series As. The average is more representative.

The average round size has been increasing by 11% annually. And this growth parallels the overall startup Series A size which has reached similar highs to rounds in 2000.

As round sizes have increased, so too has MRR at the time of the series A. Companies in the set who raised in 2014 recorded $50k in MRR at the time of the A. That figure has grown each year by 80%, and for the investments that closed in early 2016, that figure reached $163k. The increase is driven both by larger seed round sizes enabling companies to raise later, hence more MRR, and also the greater expectations in the fundraising market given larger check sizes sought by founders.

Surprisingly, 27% of these companies raise Series A with $0k in MRR, before the business has commercialized the software. At this point, investors are betting on the team’s unique backgrounds, approach to the market or some other characteristic of the opportunity.

Unlike later rounds, Series A pricing has no correlation to MRR or next-twelve-months (NTM) revenue, which is a proxy for growth rate. This lack of a relationship indicates the Series A market pricing is more of a function of supply and demand and the ability of the founders to engender an active auction, than a mark-to-market pricing event.

But 2016 will likely herald some changes in the market, so many of these metrics will evolve this year. 2014 and 2015 were two of the largest VC investment years in the last 20. And to put things into context, seed investment has grown 5x since 2010, Series A investment has doubled and Series B+ has tripled. The recent drops in Q4 of between 15-20% in those stages are material, but we’re still in an elevated investment environment compared to 2010.

The public markets have repriced SaaS companies, halving their forward multiples and founders are feeling this in the private markets. First Round surveyed founders and found 66% expect the fundraising market to be more challenging in 2016 than 2015.

Consequently, there are three major themes of 2016 for the Series A SaaS market. First, public market declines will pressure valuations. Second, unit economics matter. Growth at any cost won’t be handsomely rewarded as in the past. Third, M&A will pick up as there’s nearly $400B of cash on the balance sheets of big corporates and less than 2% of current IT market cap is cloud.