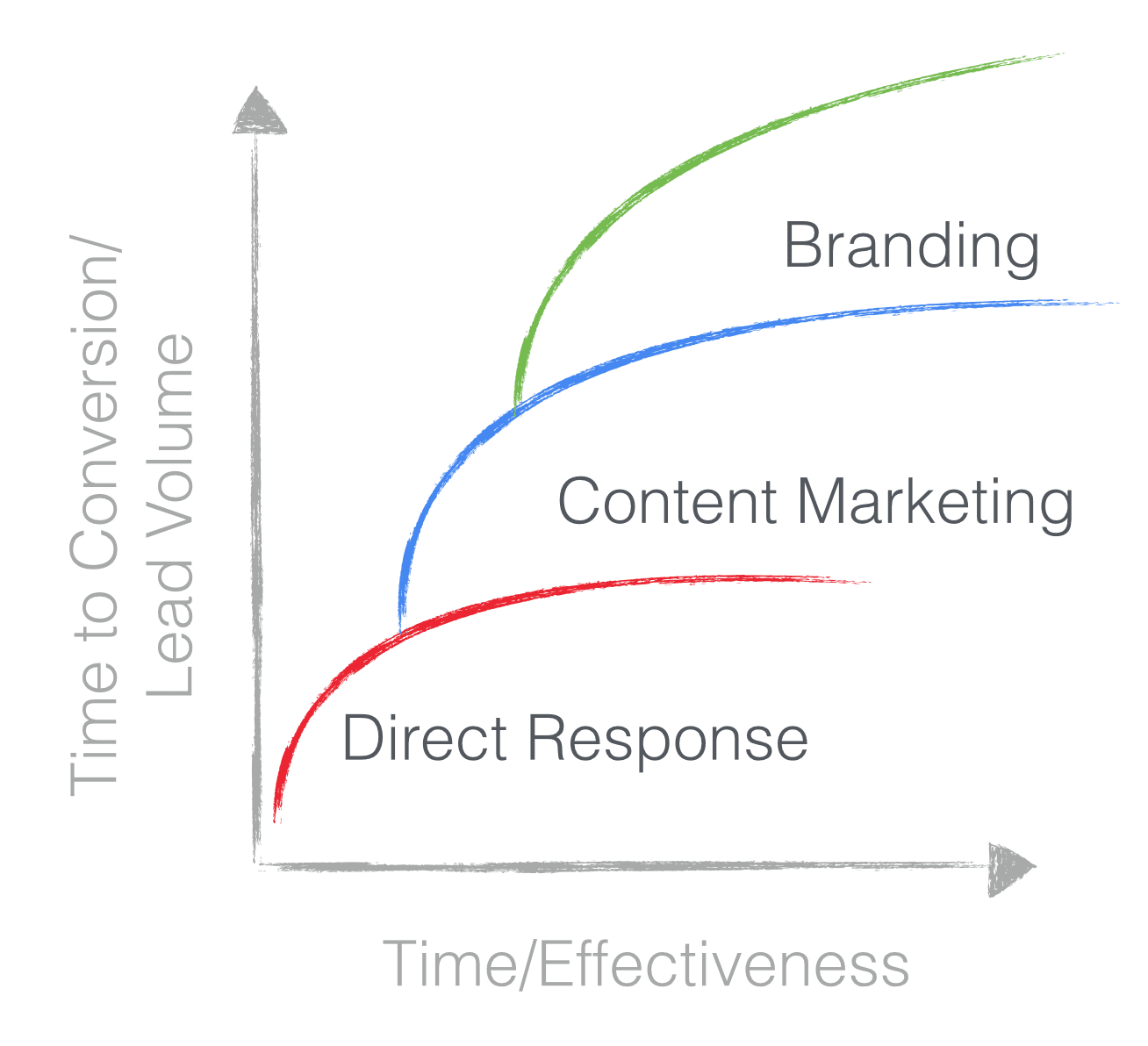 At a board meeting last week, one of the VPs of Marketing I’m lucky to work with presented a brilliantly simple way of explaining the evolution of a startup’s marketing tactics. I’ve drawn a diagram of the idea above, which borrows heavily from McKinsey’s 3 horizons.

Startups have many different marketing options at their disposal: SEO/SEM, print, radio, TV, mail, affiliate, content marketing…The list goes on and on. Faced with this litany of options, how does a startup maximize their marketing effectiveness?

Initially, a startup’s goal is to find a channel with profitable unit economics (where the cost-of-customer-acquisition is less than the gross margin over some lifetime-value estimate) with as small an investment as possible to minimize burn. To find that viable acquisition channel requires lots of testing, so fast testing cycles of different advertising tactics are paramount to determining the viability of a channel. Fast iteration cycles tend to be at the bottom-of-the-funnel, when potential customers are at the point of purchase. Typically, when startups get started startups experiment and pursue success in direct-response advertising including cost-per-click, cost-per-lead, cost-per-install and other forms of performance advertising.

At a certain point, the marginal returns of continued investment in bottom-of-the-funnel customer acquisition strategies begins to winnow. Before such a point occurs, the startup should move up the funnel and begin to experiment with middle-of-the-funnel tactics, where potential customer leads are educated and nurtured. Moving up the funnel implies addressing a broader universe of new customers at the expense of longer customer-conversion times and a decreased ability to measure the effectiveness of a dollar of marketing spend.

But, having built the systems and processes to measure the effectiveness of performance advertising, a startup is in a much better position to evaluate middle-of-the-funnel advertising, like content marketing, lifecycle-marketing and others.

Said another way, at its outset, a startup should focus on customers who will convert in 30 days, focus on those channels and master them. Once a playbook has been established, then a startup should aim to reach ever broader audiences with riskier (or less measurable) channels, first in the middle of the funnel and then the top of the funnel.

In this way, a startup can match the growth needs and the predictability needs of each type of marketing channel with the needs of the startup, namely the ability to grow and also demonstrate compelling unit economics and repeatable growth, the cornerstone of successful fundraising.