A Surprisingly Powerful Mechanism for Growing a SaaS Startup 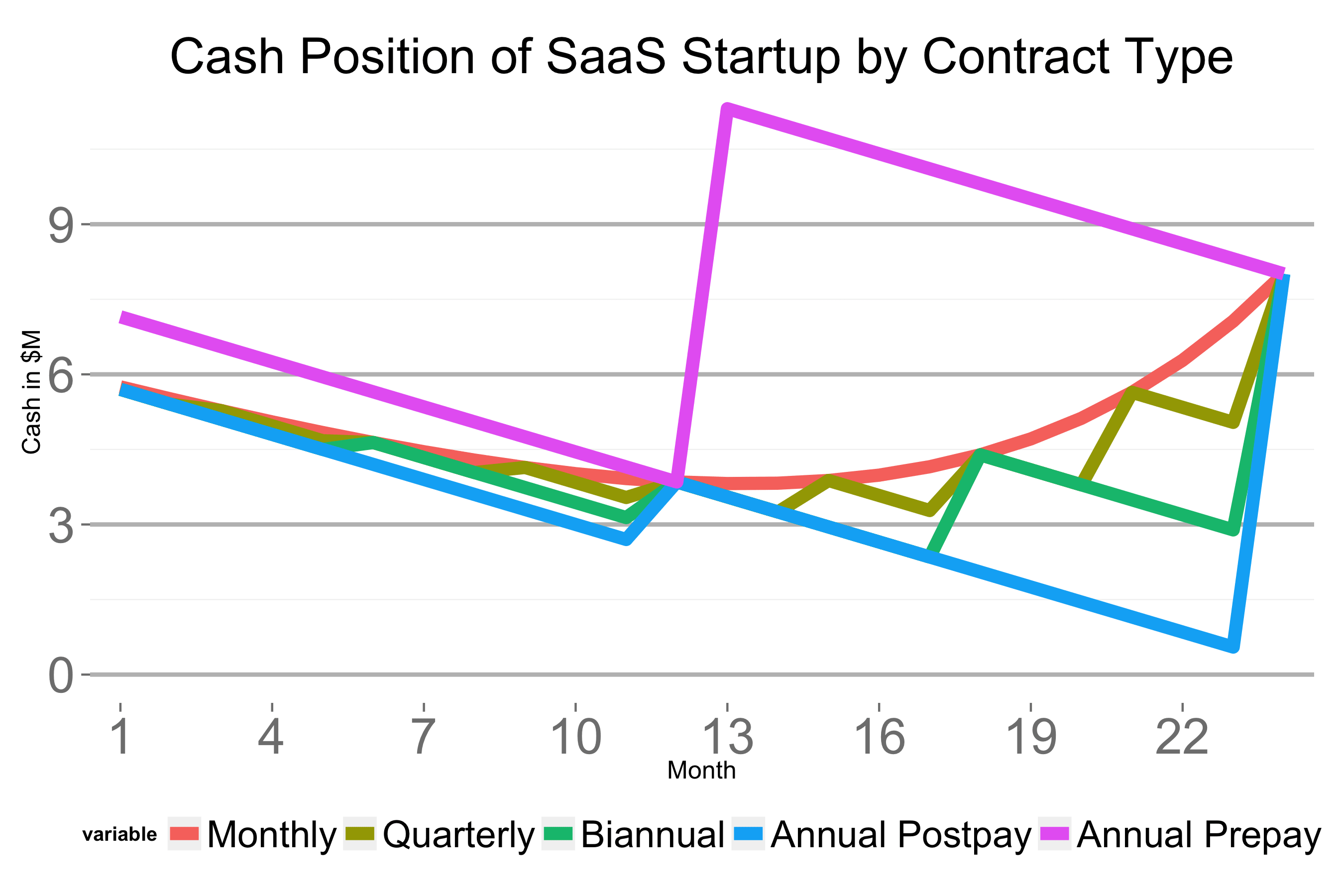 One of the single most effective tools SaaS companies can use in order to grow faster isn’t tweaking the product in a particular way or implementing an AB optimization framework or adopting new marketing tactic. Rather, it’s financial judo for structuring contracts and cash collection.

Cash is the lifeblood of startups. Cash empowers management teams to invest in all kinds of growth mechanisms. So, it’s no surprise that maximizing a company’s cash to invest in growth is a good thing.

The most effective way I’ve seen of maximizing cash in SaaS and subscription businesses is asking customers to pay at the beginning of their contracts. The chart above contrasts the difference in a hypothetical startup’s cash position over the course of 24 months. This hypothetical startup generates $50K in MRR in month 1, grows by 15% month over month and burns $300k per month. The startup has just raised $6M in Series A financing.

It’s no exaggeration to say that in one scenario, the startup just scrapes past bankruptcy and in another, the company’s coffers overflow with more than $10M in cash in the bank. The magnitude of the change in the company’s health is hard to overstate.

At months 12 and months 24, the startup’s cash position converges on the same point. But in between, there are huge differences in cash, particularly in the second year. It’s plain to see that annual prepay is the most advantageous position for the company,

In the annual prepay scenario, the company generates negative working capital. Customers are financing the company’s growth by lending the startup money at effectively zero interest. The startup can take that capital and double down on growth if it makes sense for the business, a luxury the other parallel financial universes don’t allow.

To accomplish this transition from monthly payment, for example, to annual prepayment requires retraining of the sales team and also perhaps adjusting the sales compensation plan. But it can be done. Wildfire moved from a campaign billing model to an annual prepay model over the course of three months and during that time period moved 80% of revenue to prepayment. Needless to say, this small initiative had a disproportionate impact on the financial health and the consequent growth trajectory of the business.

Managing cash collections and structuring sales contracts are some of the most impactful initiatives a SaaS company can undertake to maximize their chances of success, particularly in the early days of the company’s life.

What's Wrong with the Internet of Things