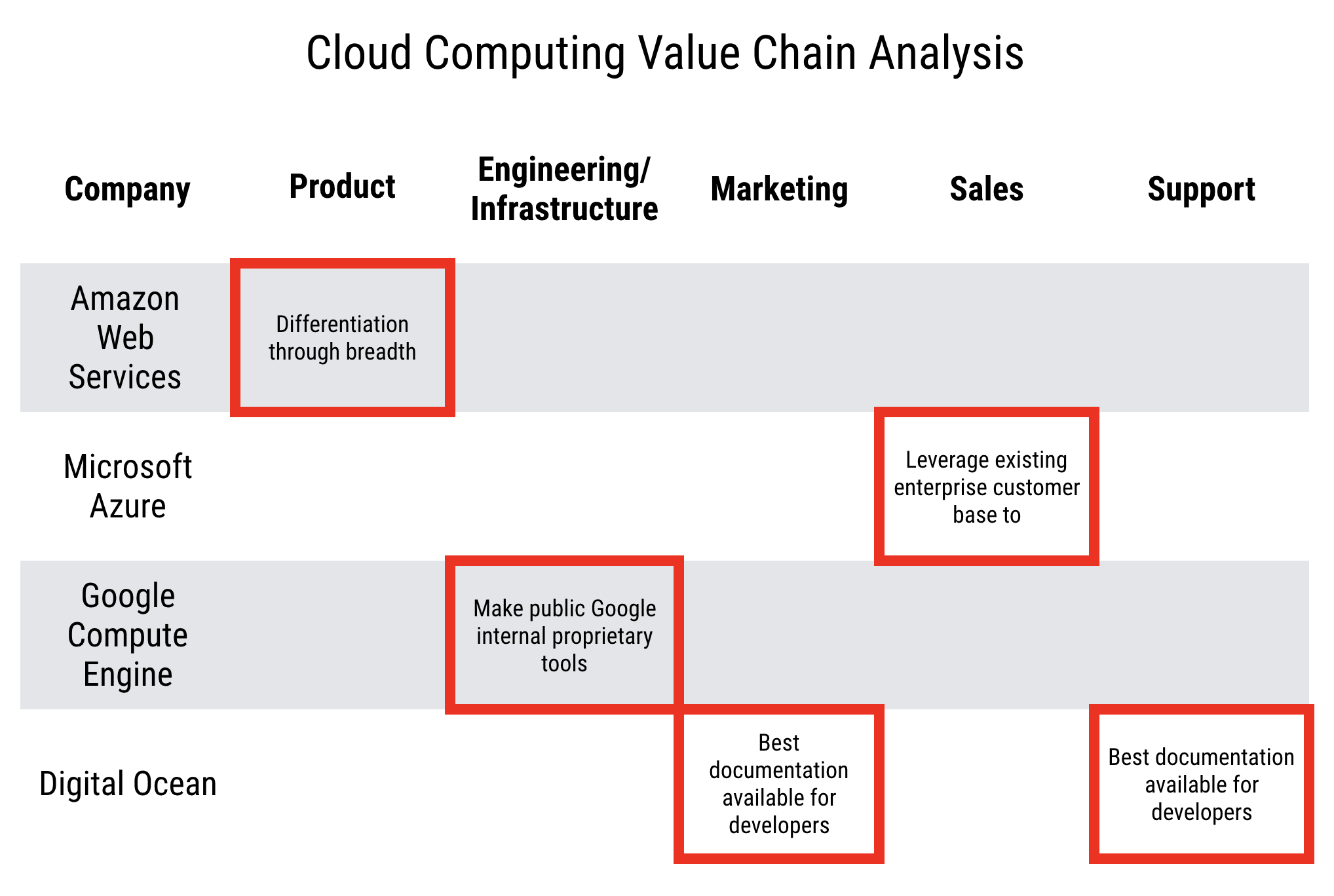 When I was taught Michael Porter’s value chain analysis, I learned to analyze at the industry level. A beer supplier sells to wholesaler sells to distributor sales to retailers sells to customer. But as I went back last night and reread Porter’s Competitive Strategy, I was surprised to learn that Porter’s intended value chain analysis to be used also at the business unit and at the company level.

The more interesting of the two for startups is the company level. A value chain analysis of the company level aims to determine the primary focus/competitive advantage of each company within a space. In order to be successful, startups have to be good at many things. But most of the time, they are exceptional at one thing.

The startup often inherits this exceptional characteristic from one or more of the founders. A relentless focus on product excellence (Apple). A unique selling strategy (Salesforce). Best in class and proprietary technology (Google).

Determining how to compete is a critical part of developing a startup idea. In most software categories, incumbents exist and for start up to win share, the company must wrest budget of way from incumbents.

How to do that best? Use startup judo. The first tenet of judo is never to oppose strength with strength. The second is to maximize leverage. To do that, a startup must understand where opponents are strong, and where they are weak. By attacking the weak points and matching them to customer needs, a startup creates maximum leverage.

The chart above is a value chain analysis at the company level for the cloud computing ecosystem. I have listed the four major players: Amazon, Microsoft, Google, Digital Ocean. The columns across the top enumerate the key activities of technology companies. In the red boxes, I’ve highlighted the key strength of each of the competitors.

Amazon released more than 1500 products last year. Their competitive advantage is speed and breadth. By launching many different products, they can quickly understand which initiatives have strong market pull then double down on those. Plus, by maximizing their product footprint, they have captured a majority of the market.

Microsoft has signed hundreds if not thousands of customers to enterprise license agreements. These ELAs enable customers to buy Microsoft products without having to go through procurement, greasing the sales process. The Azure team has built products to leverage that strength. A F500 can simply decide to replicate a local SQL Server instance to cloud Azure instance with a few clicks, and they instantly become a Microsoft Cloud customer.

From its earliest days, Google has spared no expense to develop the best infrastructure in the world. Google’s cloud is arguably the most sophisticated and best built cloud. In the market, Google differentiates by offering these public infrastructure services, which have made them so successful, to everyone else. Whether it’s the artificial intelligence offering, the highly scalable big query product, or the globally distributed transactional database Spanner, each of these products are best in class.

Up and comer Digital Ocean meanwhile competes through support and marketing, which are almost synonymous in the developer world. Digital Ocean has developed the best documentation for engineers using cloud platforms. This reduces the friction of signing up, minimizes the cost of customer acquisition, and fills the funnel.

Each of these companies are successful by choosing a competitive strength that fits their unique assets. To start a cloud company today whose differentiator is better technology would be to embark on a very difficult journey. How is an early-stage company to compete with Google’s balance sheet and thousands of engineers?

Porter’s value chain analysis is useful at many different levels. But when starting a company and trying to determine its strategy, the value chain analysis at the company level can be an insightful tool to maximize an early stage company’s leverage and ultimate success.

The Unbundling of Excel