Yesterday, I showed the increasing share of venture capital investments consumer companies represent. But examining the trends at a category level may mask patterns by consumer category and also by stage.

So, I’ve created two charts: the first is a bar chart of consumer investment by segment and the second is a heatmap of of sector and stage. I categorized the consumer investments by 10 leading firms over the past 18 months into six buckets of my choosing. 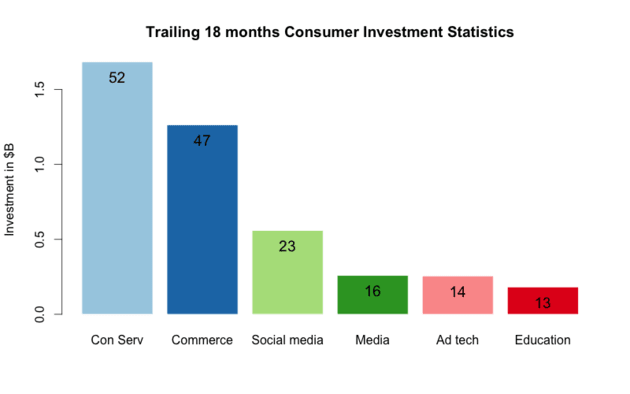 Consumer services and e-commerce companies are the biggest recipients of investment. Combined, these two segments represent 70% of dollars invested and 60% of deals by volume.

In addition to being the most common, consumer services average deal size is $36M, 50% larger than commerce and social media deals at $24M, implying this segment fetches the greatest valuations.

Consumer services investments have boomed because of the growth of smartphones enabling innovation in transportation and the rise of socially enabled services built on Facebook and Twitter’s distribution mechanisms.

Ecommerce has witnessed a surge in investments in the past few years with the rise of couponing, subscription commerce and vertically integrated commerce. Given the challenges of many of these companies, I suspect this trend to reverse.

Series A is the most vibrant stage for consumer investments 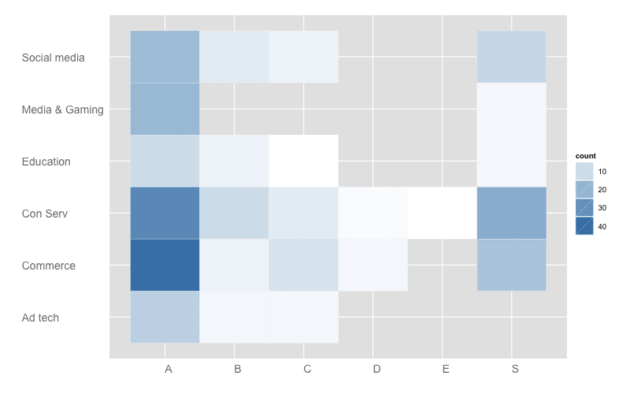 Above is a heatmap indicating the number of consumer investments in the past 18 months broken down by Series and Sector. S indicates seed rounds.

54% of investments made by these firms in the past 18 months are Series As. Only 11% are Series Bs. About 22% are seeds (though this figure is likely far too low since many seeds are unreported).

As for category observations, ecommerce and consumer services command the lion’s share of investments, as we saw in the chart above. Media and gaming seems to be a category with particularly high follow on fund raising risk.

Despite the relatively small sample set of about 270 transactions, the trends are clear. VCs continue to invest in early stage ecommerce and consumer services companies.

The cognitive burden of unbundling