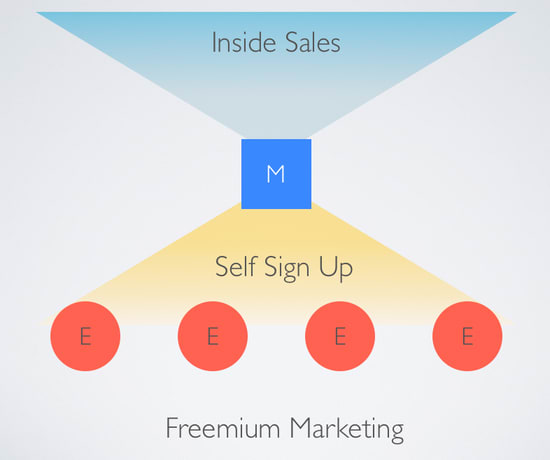 Freemium businesses disrupt incumbents by dramatically reducing the costs of customer acquisition. Instead of a single step top down enterprise sales process, freemium businesses break the sales process into two parts: community building and prequalified close. By granting free access to a great product, a freemium business develops a community of evangelists within an organization that foster demand for a product. This demand will eventually convince a manager to purchase the product on behalf of the team goaded by the social proof of a large fraction of employees using the product.

Freemium businesses rely on a top-notch product to attract users but feature based pricing plans can undermine that strategy. Imagine a successful bottoms-up freemium SaaS business. The product team has built a great new feature that will drive engagement and delight users. They speak with the marketing team about the launch. The marketing team, whose ambition is to drive up-sells to higher pricing tiers, will push the product team to release the great new feature only for the most expensive tier to entice upgrades. Since most businesses, even SMB SaaS businesses follow the 80/20 Pareto rule, where the majority of revenue is generated by a small minority of customers, this marketing decision restrics the great new feature to a small subset of the user base. The compelling product that formerly drove bottoms up adoption is now only available to the end users who pay the most, an antithetical result, that will ultimately hurt the marketing funnel.

These misaligned goals come about because the pricing plan is incorrectly targeted to the end user. Instead, the management functionality, not the end user’s experience, should change depending on a customer’s willingness to pay. Yammer’s user experience never changed when a customer converted from free to paid. The driving factor to conversion wasn’t the end user, but IT’s desire for control. For Expensify, the same is true. The paid product features satisfy the needs of accountants and company finance teams, not end users.

To maximize growth, the end user should be using the same product, whether free or paid. Tiered pricing plans for freemium business work best when the feature differentiation targets managers, not end users. Which customer base does your pricing plan target?

Crawling - The Most Underrated Hack