Distributed autonomous organizations (DAOs) are one of the most vibrant areas of crypto. DAOs are groups of people with the right to vote to change how a crypto company operates.

DAOs pop up for many different reasons: to form a social club that requires a token to join, to buy a copy of the Constitution, to manage open source software. Almost any group of people can organize a DAO to pursue a shared purpose.

Anyone holding a voting token can vote, much like anyone who buys a share of voting stock in a public company can vote during a shareholder meeting.

But DAO culture is unique. It’s no boardroom. The vibe is more Github, less Goldman.

Within DAO forums, token-holders propose ideas. Any member of the DAO can suggest a proposal, which members debate then ratify or strike-down. A proposal may advocate altering the roadmap (evolve from proof-of-work to proof-of-stake); or distributing some funds from the company’s treasury (as a dividend or to pay a vendor for a service); or advocate changes voting rules, among many other things. To get a feel for these types of conversations, visit Uniswap’s DAO.

DeepDAO, a provider of data on DAOs, counts more than 4000 DAOs with more than 0.5m active voters.[1] By examining the behavior of the top 20 most valuable DAOs, we can see some patterns emerge. 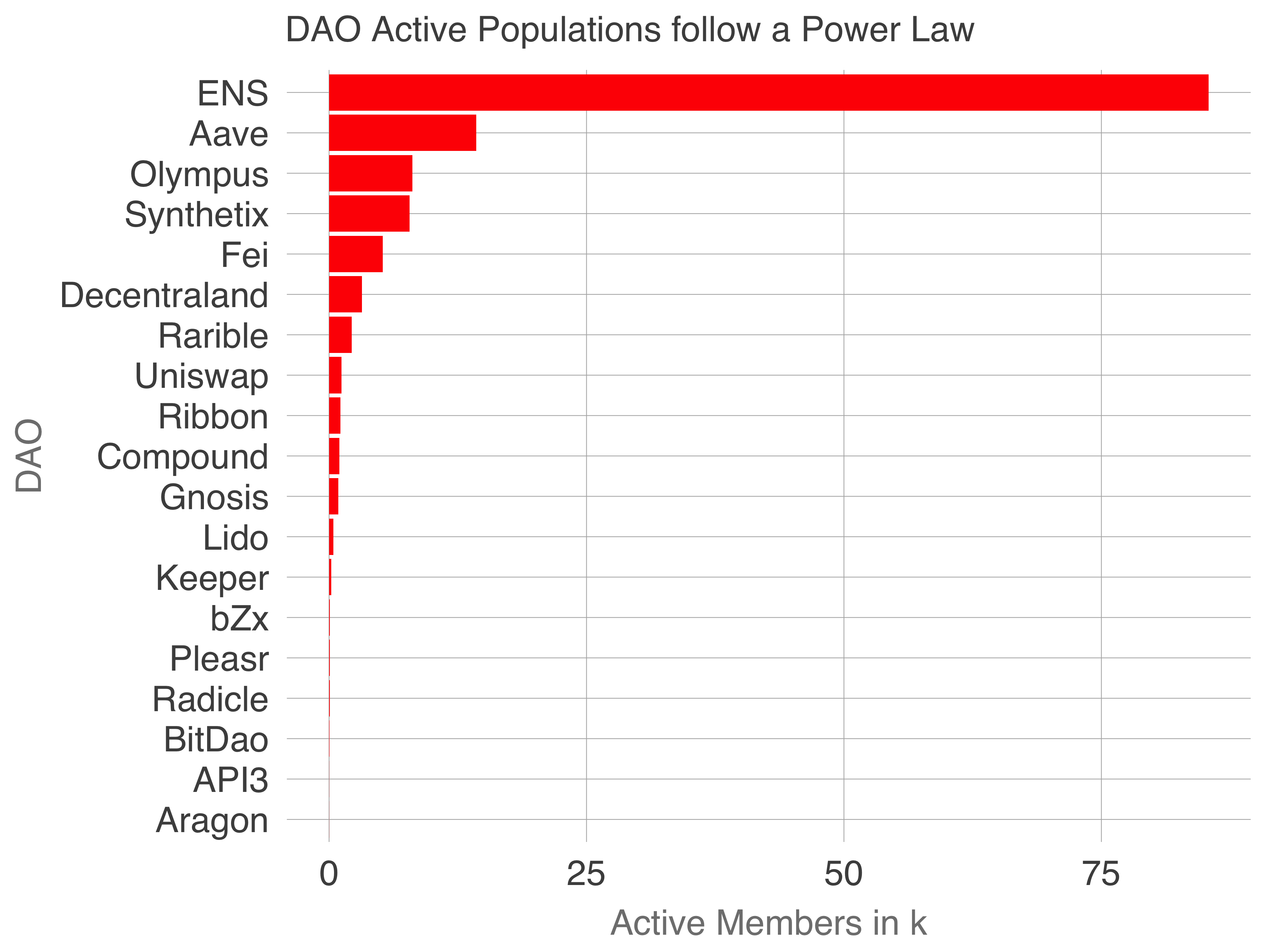 First, DAO populations follow a power law. ENS (Ethereum Name Service), which sells usernames for people and names for wallets, manages the largest of these DAOs with more than 95,000 active members who have cast 98.6k votes across 15 different proposals.

In contrast, Radicle counts 68 active members for a DAO worth $249m who have cast 76 votes across 5 proposals, according to the DeepDao data. 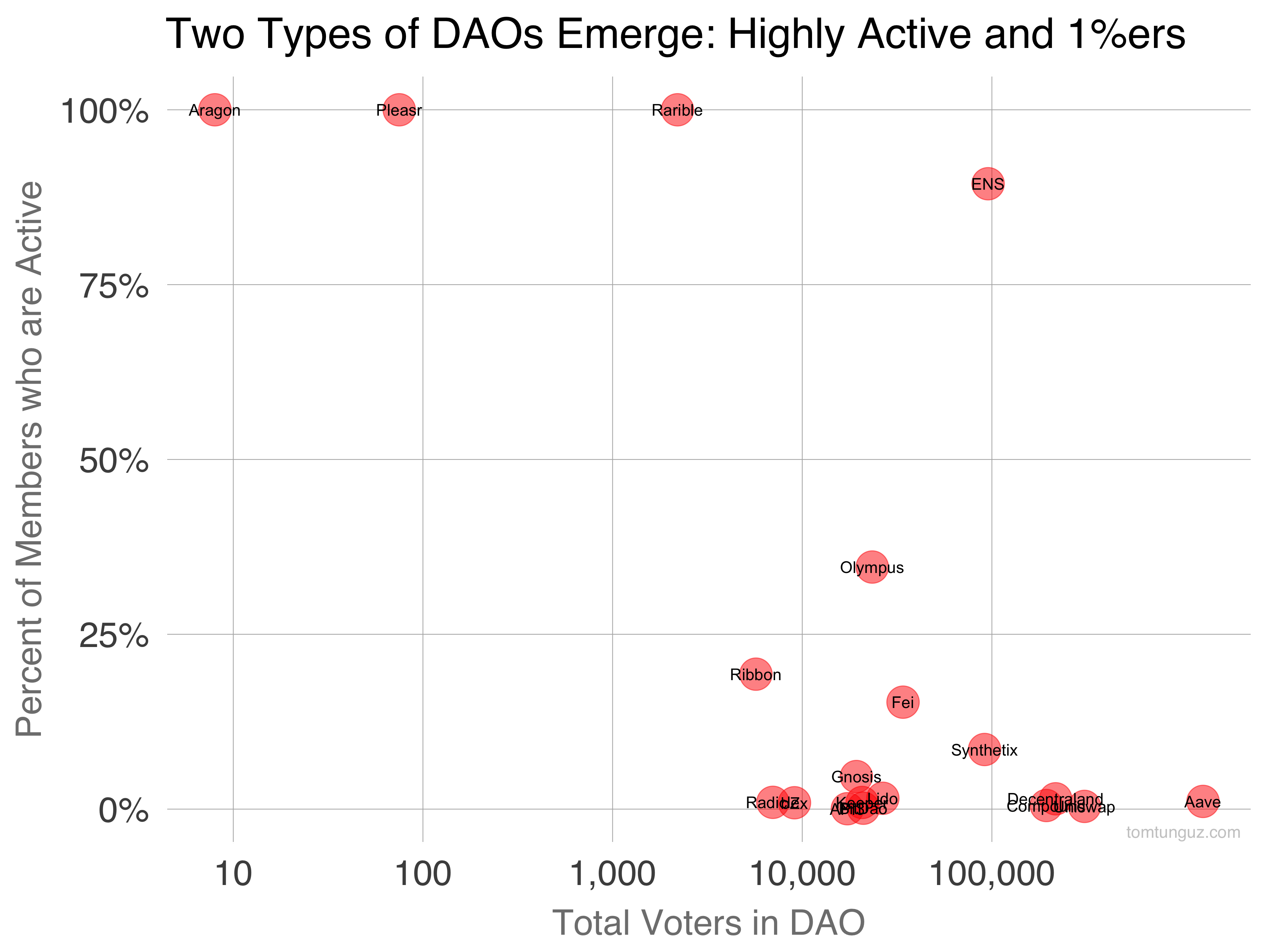 ENS has more than 100,000 members and nearly 100% of them are active. Aave has a similar size voter base but the opposite level of activity. OlympusDAO and Ribbon break the mold with relatively large voting populations a moderate rate of activity at 25%.

What’s best? It depends on the goals of the DAO. A social club might seek maximum participation. A highly technical Defi protocol may prefer a coterie of experts to shepherd its direction. Some DAOs see many proposals. Decentraland, a 3D virtual world, counts more than one thousand; while others’ ballots number in the single digits.

One of the key responsibilities of DAO founders will be determining how they prefer their community to behave, what norms they will seek to encourage. Setting those early will be key to the success of the DAO.

I suspect 1/9/90 heuristic - 1% of the population creates, 9% comments, and the remaining 90% lurk - will emerge as the dominant pattern. This rule seems to govern most social networks today and DAOs are another form of social network - one with hundreds of millions of dollars behind them.

DAOs hold the promise to a new way to organize people with a shared interest in project or purpose. We should expect some of the same behaviors in existing social networks to arise within DAOs, and some entirely new ones enabled by large treasuries and the voting construct that enables self-determination.

[1] DeepDAO is in alpha so there’s likely to be some tightening up of the numbers as the company progresses.
[2] Active rates are noisy because voters can provide their votes to a protocol proxy, who votes on their behalf.

The Next Key Innovation in the Shift-Left Movement