Call it what you like. The Series A Crunch or Silicon Valley’s Financial Cliff, there’s a lot of talk about the challenge seed stage companies facing insurmountable odds raising Series A investment - PandoDaily’s analysis pegs the odds at 20% based on anecdotal data.

The three horsemen of the seedpocalypse

In the past 3 years, the three major trends influencing the seed market are:

These three forces have created the impression, right or wrong, that there is a huge wave of seed companies in the market who all need to raise Series As.

To be clear, we don’t have any data showing that the rate of company formation has changed. Nor do we have any (accurate) data on the net change in dollars commanded by seed investments as VCs have piled in and angel investors have retrenched.

Observed seed investment data indicates the outlook is stable, if not optimistic

Data on the seed market is notoriously bad. Many seeds are unreported. But let’s assume the data bias has remained relatively constant over the past 17 years. 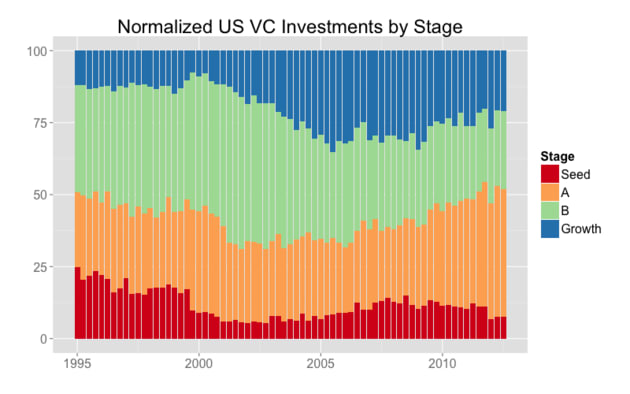 Above is a chart of US VC investments (in number, not investment size) normalized by stage since 1997 using data from the NVCA. If our assumption about the data quality is correct, then it’s reasonable to conclude that the volume of seed investment has either remained constant or slowed since 2009. But the fear over the pace of Series A investments declining isn’t borne out in the data. 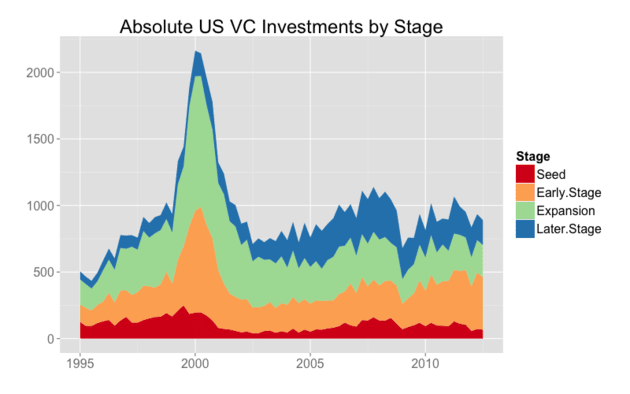 This slowing is true both on relative measures and absolute counts. In particular, Series As have grown in volume while Seeds, Bs and Cs have remained flat.

Ultimately, the health of the fund raising market is determined by how much capital VCs and angels can raise to invest. Dollars entering the asset class have remained relatively constant, as the chart below shows. 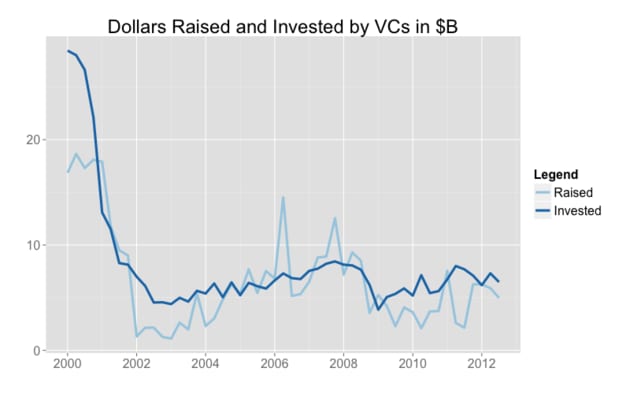 Should the seed market produce an outsized quantity of disruptive startups creating huge amounts of value, I have no doubt the follow-on capital for Series A, B and C would be there to support the company. LPs' investment allocations ensure that this will happen. And so would the forces of capitalism.

Is this the end of the world the Mayans predicted?

No, it’s not. The admittedly biased data we do have indicate the seed market is still relatively healthy. Seed volumes are relatively constant, Series A investments are growing and capital is entering the ecosystem at a constant rate.