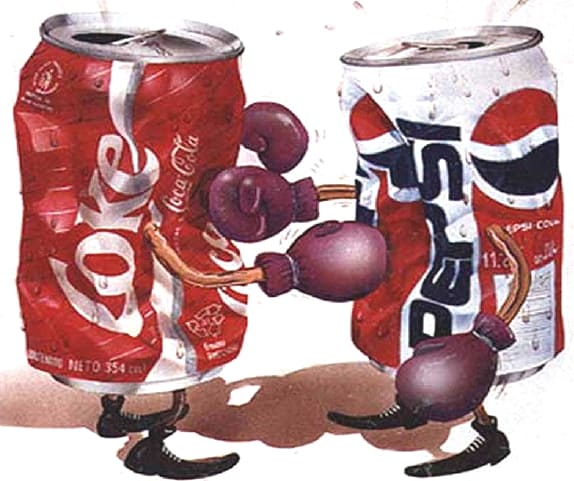 In the eleventh episode of Masters of Scale, Reid Hoffman interviews Peter Thiel. The episode revolves around the idea that to truly succeed, a startup must not beat the competition, but break free of competition entirely. The episode has many great points, but the one that stood out most to me is the idea of false competition.

You could say that Coke and Pepsi compete very intensely, on the other hand you could say that there’s somehow quite differentiated from a brand so that in practice different people prefer Coke or prefer Pepsi and they’re actually is a much smaller set of people who view them as interchangeable products. And so, I think measuring how much actual competition is happening is not always a straightforward thing to do. transcript

There is the classic perspective on the cola wars. Sweetened, colored, carbonated water is a commodity virtually indistinguishable aside from the brand adorning the can or bottle. Commodity implies competition.

But for many cola drinkers, there is no choice. One is clearly superior. The nuances between Coke and Pepsi become critical differentiators and divide the competitive landscape into an oligopoly masquerading as a competitive market.

There is far less competition than one might expect naively. Demand is not as elastic as economic theory might suggest because the subtleties (brand, bottle, taste) are the axes of competition, not cost. The same is true of coffee for caffeine cravers and gasoline brands for petrolheads. And software.

For startups, this idea cuts both negatively and positively. The negative viewpoint: though a theoretically large market may exist for a particular type of software, the universe of potential switchers - customers who forsake Coke for Pepsi at a lower price - is substantially smaller than a bottoms-up or top-down market analysis might suggest.

The positive viewpoint: there is an opportunity to enter an ostensibly congested market if the startup can determine which nuanced axes of competition are enough to entice customers to switch. For example, Stumptown cold-brew challenges Starbucks iced coffee. Casper mattresses tackles Sleep Train. Google Docs and Microsoft Word. MongoDB vs MySQL.

Both ideas lead to the same conclusion. You can create a sustainable competitive advantage for your startup by understanding the true axes of competition. And that requires researching the market or knowing it intimately, because these axes often change.

The effort is well worth it. With that strategic knowledge, you will redefine how the market buys soda or coffee or mattresses or software. In which case, you’ll have eclipsed the competition and created a monopoly.