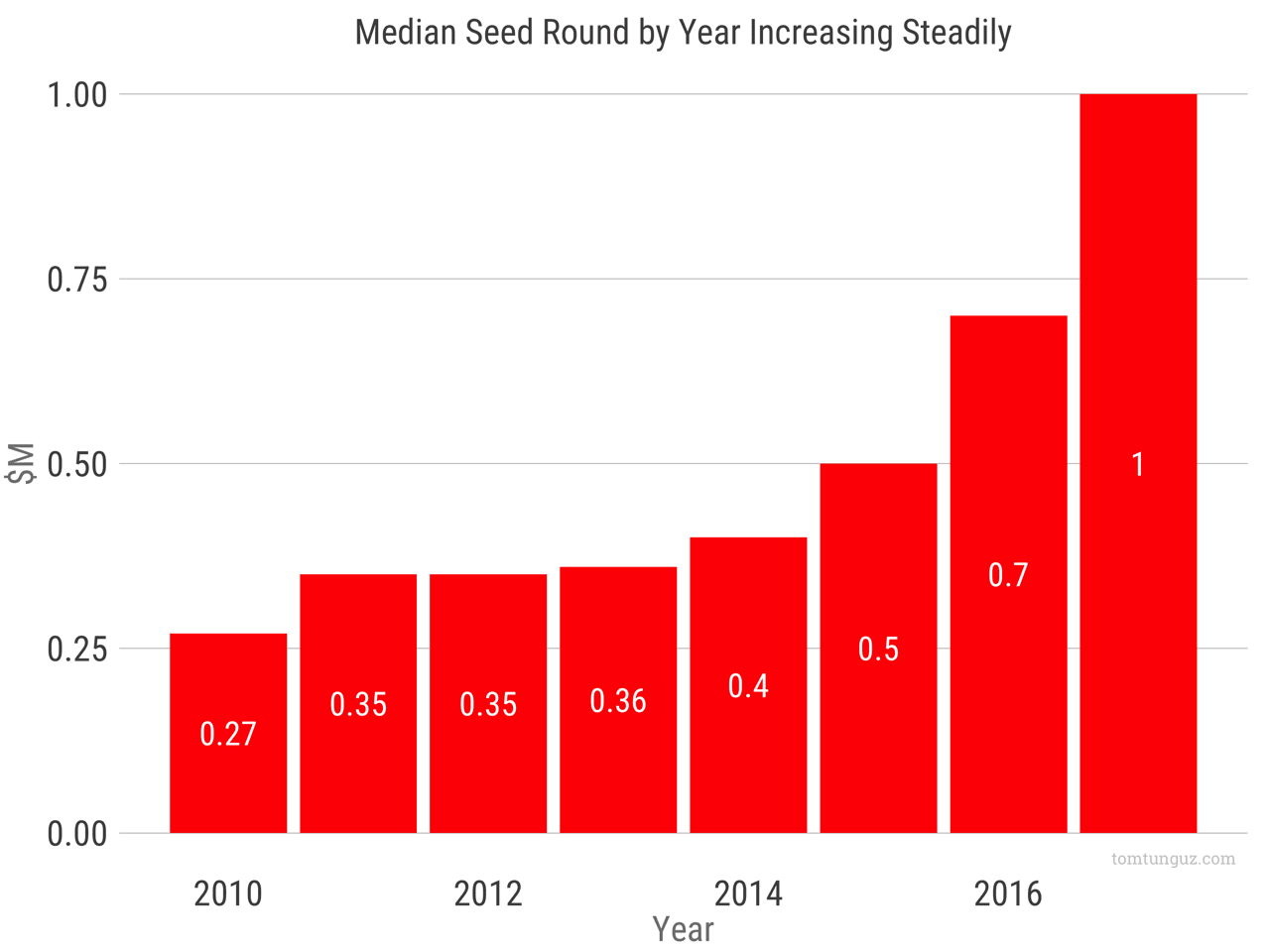 In 2016, the number of seeds has fallen by a 27.6% reduction in the number of seed rounds. But as the chart above shows, the median amount invested in seed rounds continues to increase at about 40% annually. This trend started in 2014 and has continued through the first quarter of 2017. These two forces in opposition netted a 10% increase in total dollars in 2016. 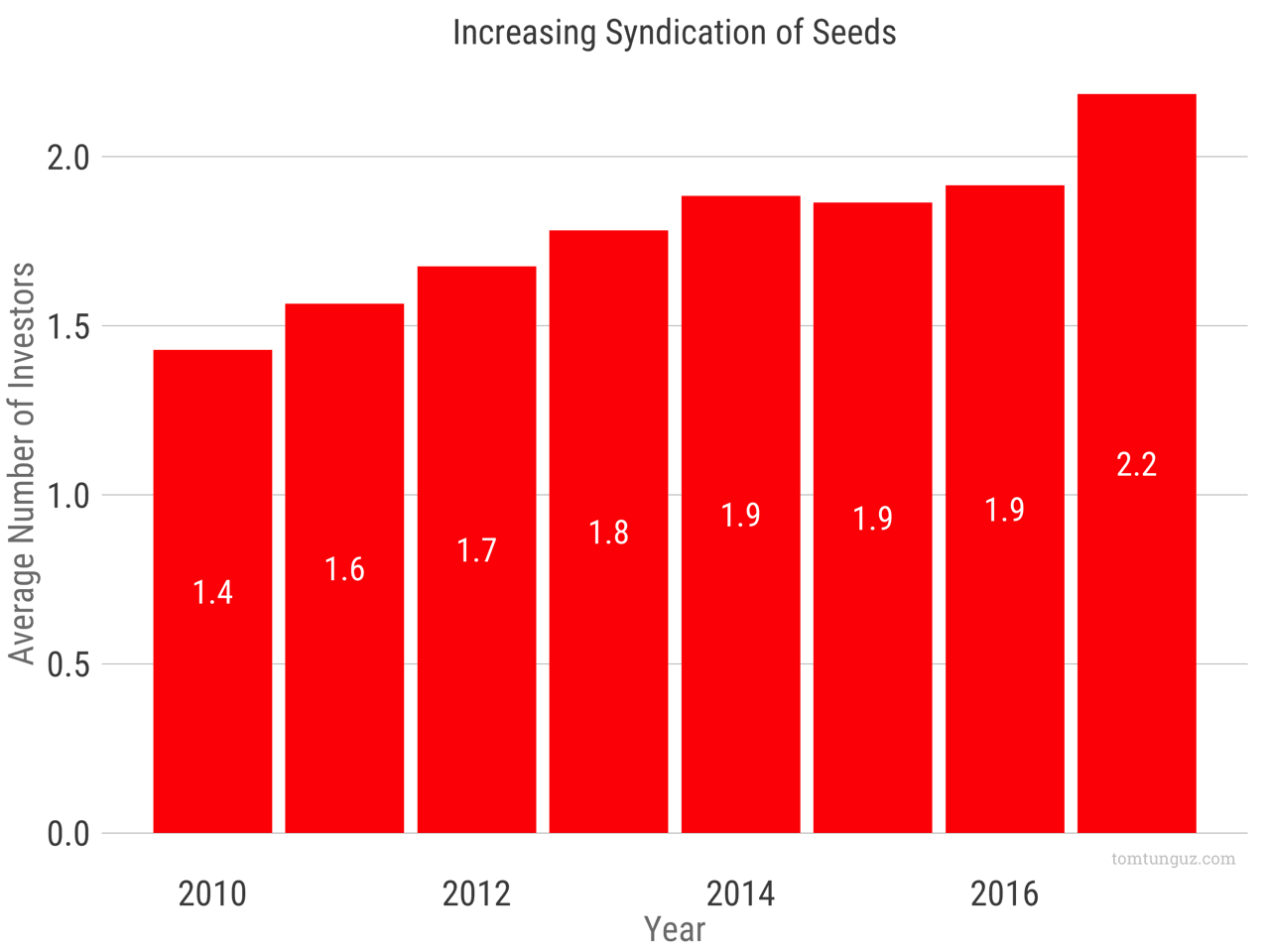 The average number of investors per seed round has plateaued at about two. A few years ago, party rounds seem to prevail in the press. But data doesn’t support a broad change. In fact, the distribution of seed investor count hasn’t changed materially over the last seven years. It’s quite nearly always 2. 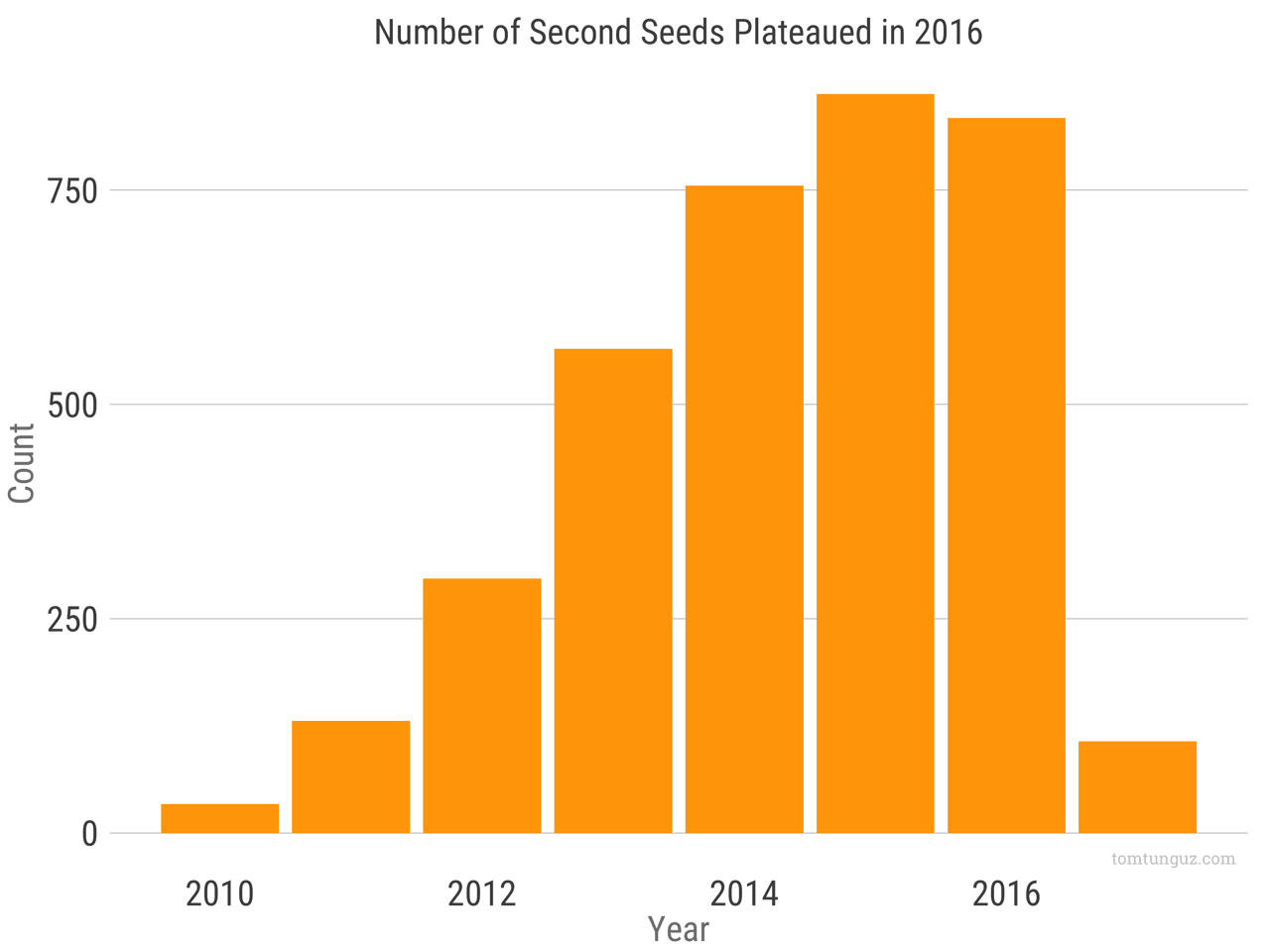 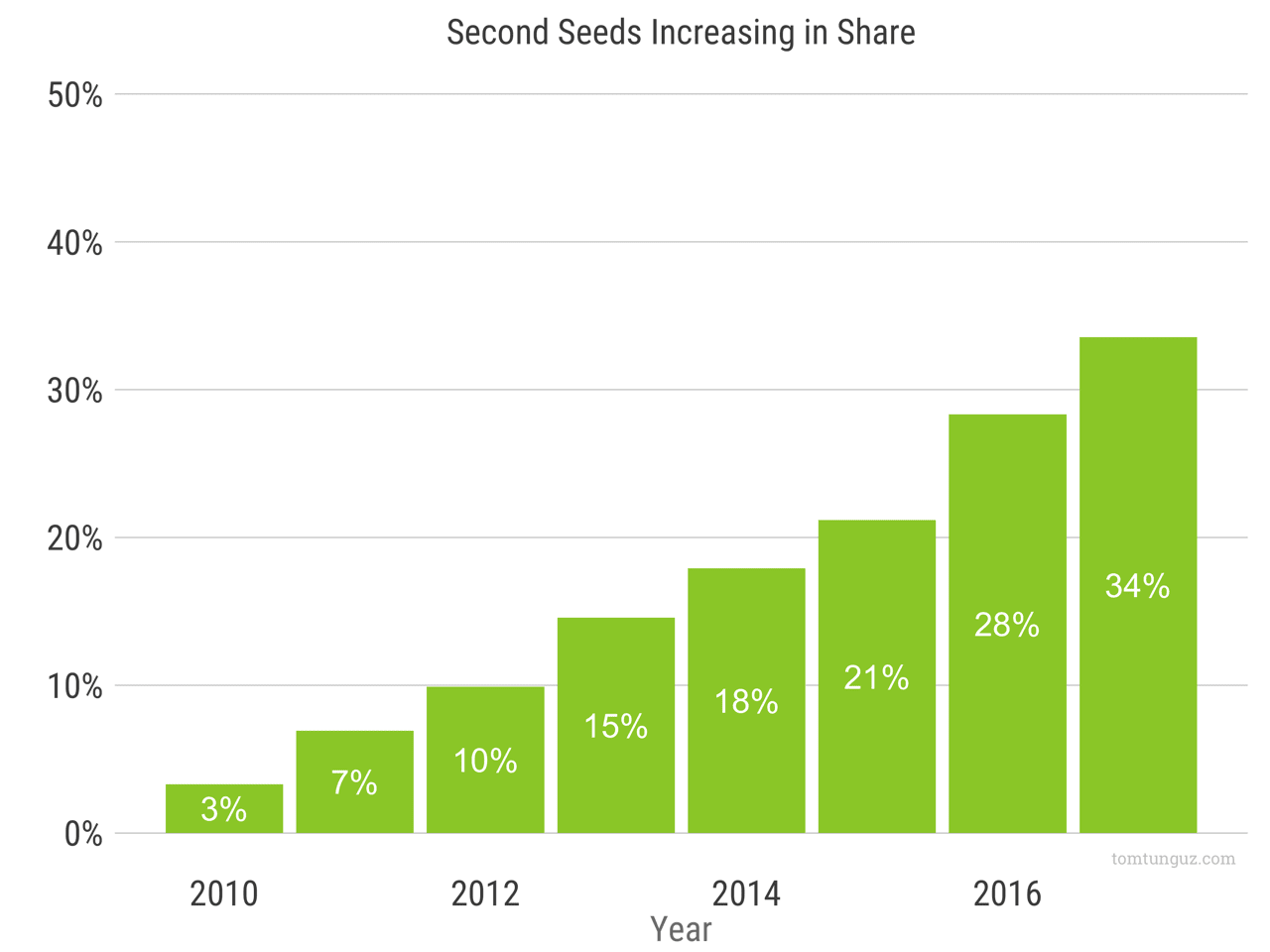 Second seeds now represent approximately one in three seed rounds. This is a big contributor to the increase in median seed round size.

Several founders have asked me recently how investors perceive second seed rounds. This data shows that they are broadly accepted as a common way to finance an early stage startup. There is no stigma with these rounds. 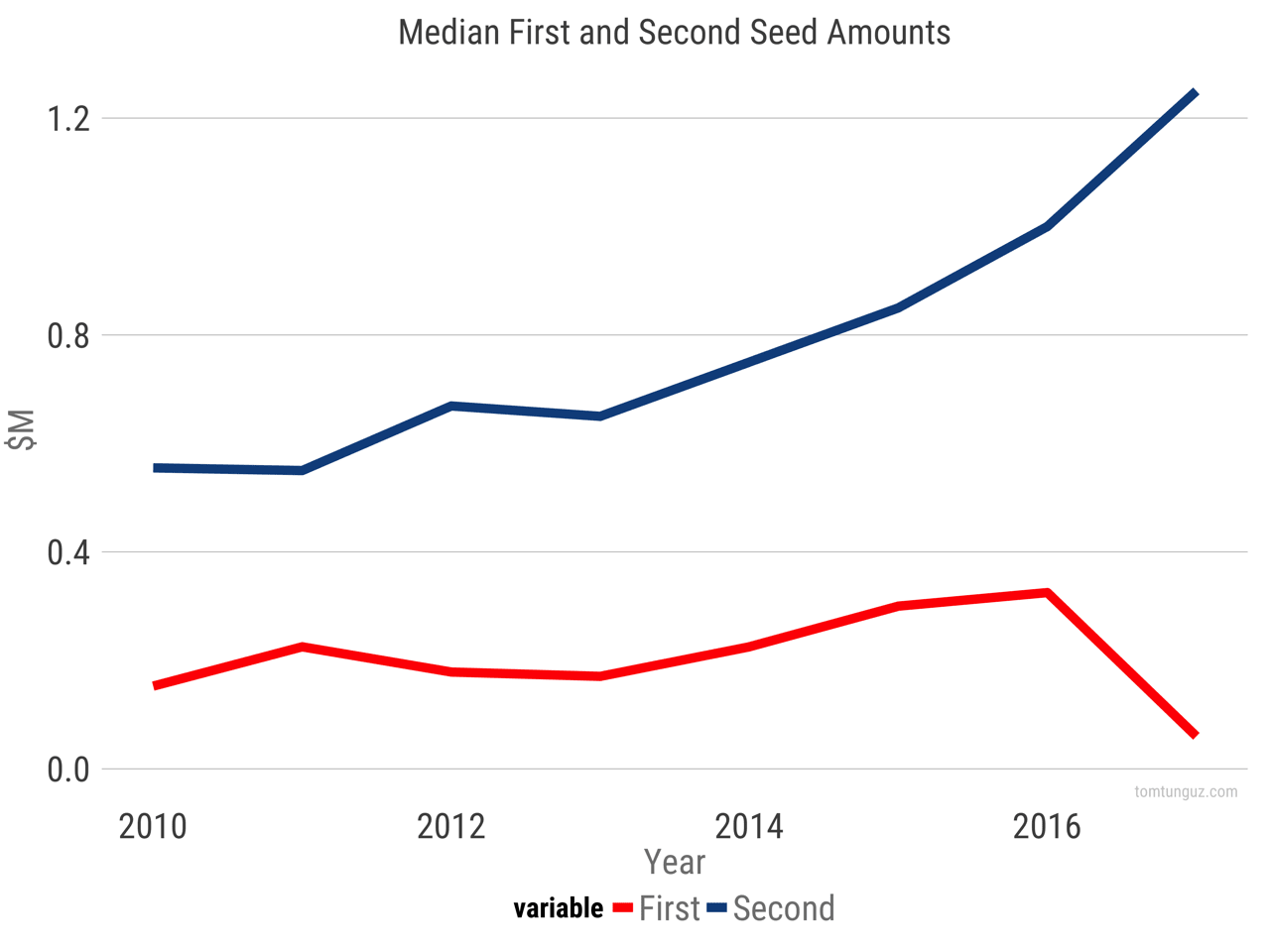 The chart above shows the median amount of a first seed round and a second seed round. The first seed round has persisted below $400,000 throughout the dataset. The anomaly in 2017 is due to an outlier. Only one company has raised two seed rounds so far in 2017, qualifying it into this dataset.

The very earliest investors' appetite and deal structure seems not to be changing. However, the increases in second-seeded rounds suggest investors are competing more for these opportunities. Consequently, round size and valuation increase.

Overall, it is difficult to paint the seed market is anything other than healthy. The total amount of capital available to seed startups is constant. The amount they can raise is increasing. Second-seed have become ubiquitous. All of these different factors contribute to strong financing market to support the very earliest companies.