The Rise of the Founder-CEO 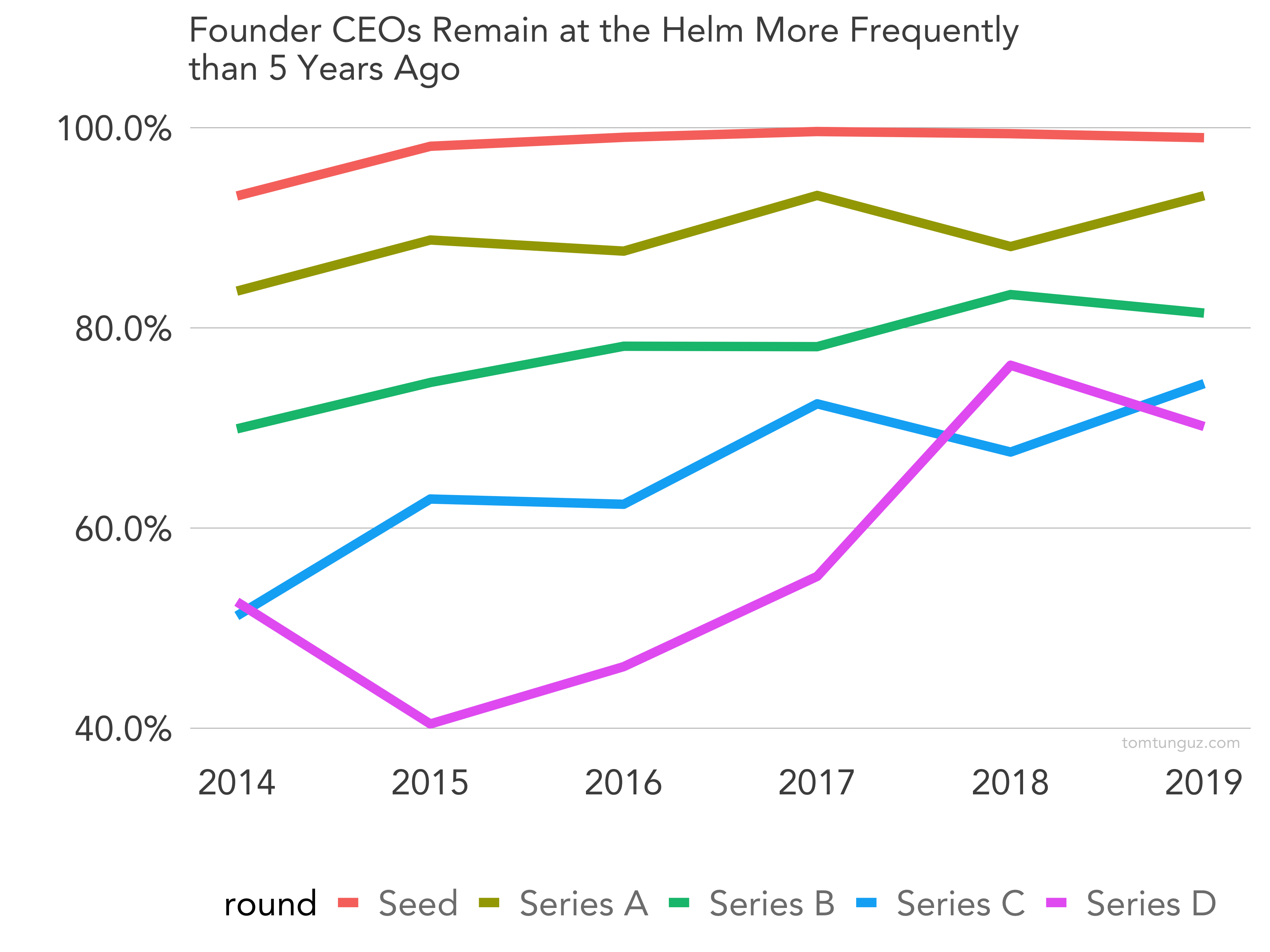 There’s no doubt we’re in the founder-CEO era of startups. Ten or twenty years ago, hiring a professional CEO to run a business was de rigeur. But today, it’s less and less common. At the seed stage, nearly all CEOs are founders. No surprise there since the company is so young.

But at the Series D, founder CEOs helm approximately 70% of venture backed startups in the Bay Area. This is up from 53% in 2014. This share has increased by a third in five years. In fact, across Series A, B, C, and D, founders persist as CEOs more frequently.

There are a few reasons to explain this trend.

First, Startupland has a culture of sharing knowledge. As we all learn more about startups, founder sophistication increases with time. Networks are stronger, richer and larger and more concepts are better understood. In SaaS, key performance metrics and benchmarks have been established. Management techniques have formalized.

Second, the increasing competition amongst venture capitalists has changed the power dynamic in between founders and investors. With more competition, VCs often differentiate on founder friendliness and changing CEOs is often perceived as founder unfriendly.

We’ve also seen the rise of founder shares with greater voting power. This construct empowers founders to retain the CEO title much longer up to IPO and potentially through it. It’s not to say that supervoting shares render CEOs invincible. We’ve witnessed some notable cases of founders with super-voting shares ousted from their perch (WeWork and Uber among others). But certainly, they play a role in founder CEO longevity.

Third, an executive talent shortage may play a role. Hiring a CEO to lead a business may be a more challenging endeavour than a few years ago because of the supply/demand imbalance market.

Fourth, companies may be raising capital more quickly, so there is less time beween rounds. We’ve seen this across our portfolio companies. What we can’t see from this data is the true tenure of CEOs and how they have changed over time.

Founder CEOs have created some of the largest technology companies. Oracle, Facebook, Apple, Microsoft, Atlassian, Google, and many other businesses have been built with the founder as CEO. In some cases, the path has been straightforward. In others, a bit more circuitous, but the founder as CEO is a powerful thing. Founders engender a moral imperative from their teams that a hired CEO may never replicate.

Of course, there are circumstances where a CEO change makes sense for the business, whether to learn from a mentor directly, jettison some responsibilities, pursue other interests inside or outside the company, or any other number of reasons.

In any case, there’s no debating the secular trend of founder CEOs.