Why Skillful Fundraising is a Huge Competitive Advantage 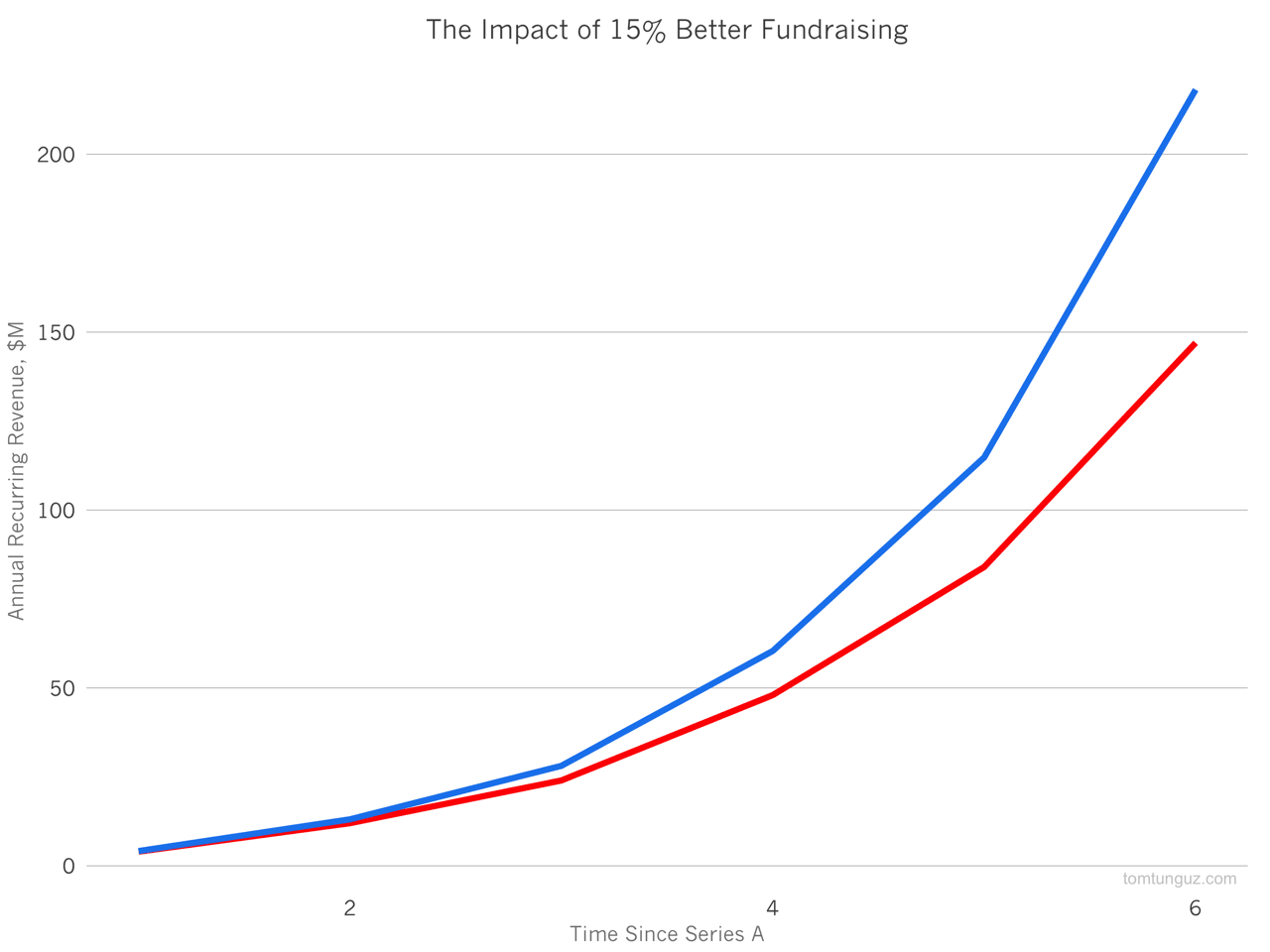 During their fundraising processes, founders often tell me “I’d really like to get back to building the business.” I’m certain it’s true. Every founder surely would certainly rather be building their product and company than fundraising.

Nevertheless, a founder skilled in fundraising can create enormous leverage for their business and develop unassailable competitive advantages. This is why it’s critical for early stage founders to invest time to perfect their pitches.

Let’s suppose we have two founders who operate identical and competing businesses. One of these two founders, who started a business called Turbo, raises capital better than the other by 15%. This deftness manifests as 15% larger rounds. So over the life of the company, Turbo business raises 15% more than Standard.

Turbo has a cheaper cost of capital. Suffering the same dilution as its competition, Turbo raises more money in each round. Consequently, the business can invest more dollars than Standard to hire additional salespeople who close more customers, deploy incremental dollars in marketing to build a brand faster, hire more engineers to develop the product a little bit faster. All of these small advantages intensify over time propelling Turbo to become the dominant player in the market.

In SaaS, these types of scenarios - where two or more companies compete directly for the same buyers - are common. Often, there isn’t substantial technology differentiation among competitors, which amplifies the importance of difference in fundraising skill. A bigger balance sheet translates into a fundamental and often insurmountable competitive advantage.

Not captured in the scenario above is the fact that over time, Turbo will be perceived by the market as the winner. As the perceived runner-up, Standard will be hampered in fundraising processes. Investors will ask themselves, do we want to invest in second place in this market? This perception will accelerate the compounding benefit of the market leader.

If attending seven years of YC Demo Days has taught me anything, it’s that the skill of pitching can be learnt. Though it may not be a favorite pastime of many founders, fundraising is a critical skill for CEOs, and well worth the investment of practice, external help with pitch design and sales training.

The advantage of a smaller cost of capital can compound over time to catapult a company to market dominance, particularly in markets where technology isn’t the basis of differentiation.

Why Bottoms Up Selling is a Fundamental Shift in SaaS