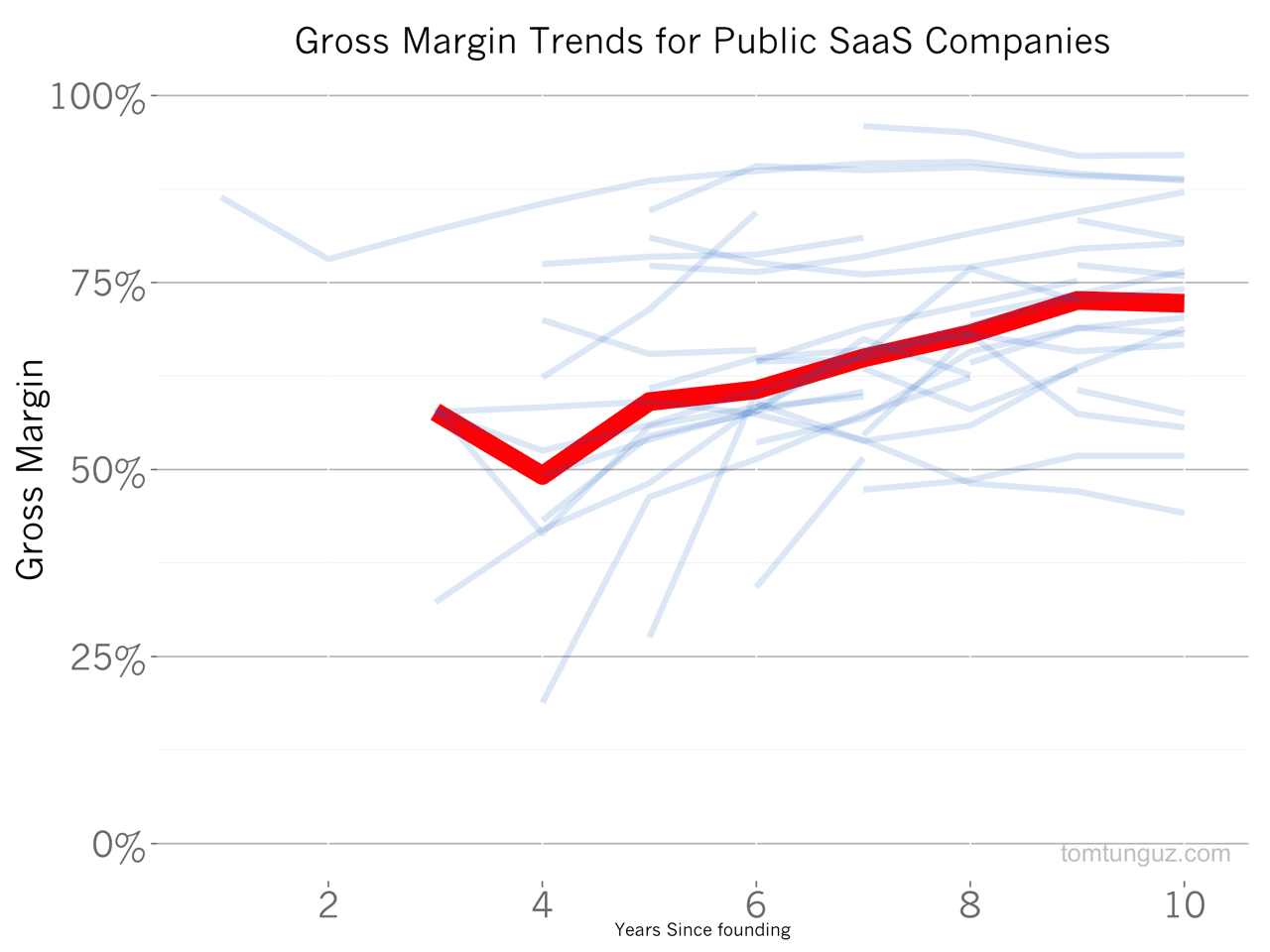 Of the ten most important metrics on a startup’s financial statements, revenue might seem to be the most important. But it isn’t. Gross margin matters more because it is directly tied to a company’s ability spend to grow and achieve profitability.

That’s quite a competitive advantage for the second business. The second business can afford to pay orders of magnitude more to acquire a customer than the first, and consequently grow much faster.

Companies reselling products they don’t produce display low gross margins. After all, they must pay someone else for the goods they will sell. For example, Walmart’s gross margin is 25%. They must buy produce from farmers/distributors. Ad networks pay publishers for the right to run ads on their web pages. Tremor Video’s GM is 35%.

On the other hand, investors prize SaaS companies because providing SaaS service costs very little, and consequently these startups record very high gross margins. The median gross margin for publicly traded SaaS companies expands from 50% in year four to just under 75% in year five, as the chart above shows. Hosting costs and Customer Success costs comprise the majority of SaaS Costs of Goods Sold (COGS). As we’ve seen in a few of the S-1 analyses, COGS can also include professional services costs for some companies, notably WorkDay.

SaaS gross margins rise for three reasons. First, as they grow, SaaS companies amortize hosting costs for their product over a larger customer base. The marginal cost to support incremental customer on cloud infrastructure is relatively small, particularly in multi-tenant environments.

Third, as a SaaS startup scales sales and marketing efforts, develops a brand, broadens the product, the business can often pursue larger customers. Many times the larger customers display a greater willingness to pay for the same product, because the value of software is often much larger in dollar terms than for smaller companies. For these larger contract customers, the marginal support costs are often similar to smaller companies that the contract value substantially higher, increasing gross margin.

At the very early stages of a startup, it can be challenging to calculate gross margin correctly. If the team is only six or ten, how much of each employee’s time is allocated precisely to customer support and service? Some engineering time, some CEO time, some sales time. It’s hard to estimate. A good accountant or CFO can help here.

Gross margin is a critical number because it informs directly how much as startup can spend to grow. It’s one of the most important metrics in a startup’s financial statements. Keep an eye on it.