Kenny van Zant drew this diagram for me on white board and I think it’s the best visualization of how SMB SaaS freemium business grow. The diagram highlights a few important mechanics of the SMB SaaS business model.

In any given freemium user base, small-office/home-office (1 to 20 employee shops) users tend to be a few times larger in size than true SMB customer (20 to 500 employees). Most of these SOHO customers remain unpaid evangelists. A few of these customers grow into SMBs and become paying customers - they cross the dashed line in this diagram. But most paying users for freemium services are SMBs.

While these mechanics may be well known, there are three counterintuitive things about the SMB SaaS model.

Counterintuitive Point #1: The SMB Market Opportunity is 2x Larger than the SOHO Opportunity

Below is a bar chart showing the number of employees working in businesses by size of employees using data from the US Census. While there are nearly 5M SOHOs in the US and only about 1M SMBs, there are twice as many employees in the SMB segment than in the SOHO segment, 38M in SMB and 21M in SOHO.

For any business charging on a per seat model, this means the SMB market is about twice as large as the SOHO market. 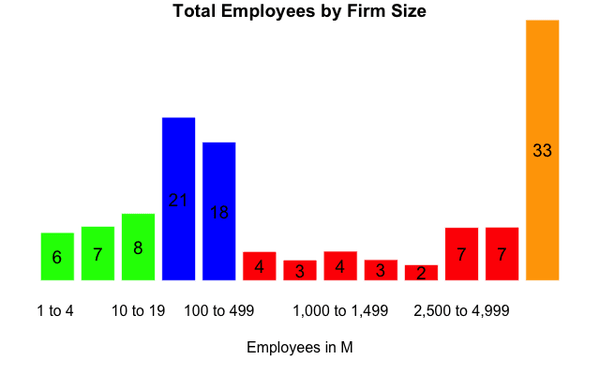 Counterintuitive Point #2: SOHO Customers are Just As Important as SMBs

Despite the typically lower conversion rates and smaller business opportunity of SOHOs, SOHOs are critical in SMB SaaS success. They are the word-of-mouth marketing force that blogs and tweets and drives mobile app store volume to boost chart rankings and tells their friends about this great free product they are using to solve their problem.

In traditional software businesses, the enterprise sales team hunts. They acquire leads, cold call, and push customers to convert. Their counterparts, the inside sales team, nurture and cultivate these relationships to prevent churn and grow revenue through up-sell.

Freemium businesses reverse the roles. The inside sales team fields the freemium leads from free user base, make the cold calls and push the customers to convert. The enterprise sales team looks for multiple teams within the same company paying separately, builds a relationship and grows revenue through up-sell, helping their customers grow.

While SMB SaaS business may seem like traditional software businesses scaled down, they aren’t. The SMB and SOHO markets require a wholly new marketing approach that may seem counterintuitive at first, but when implemented well, can build very large businesses.