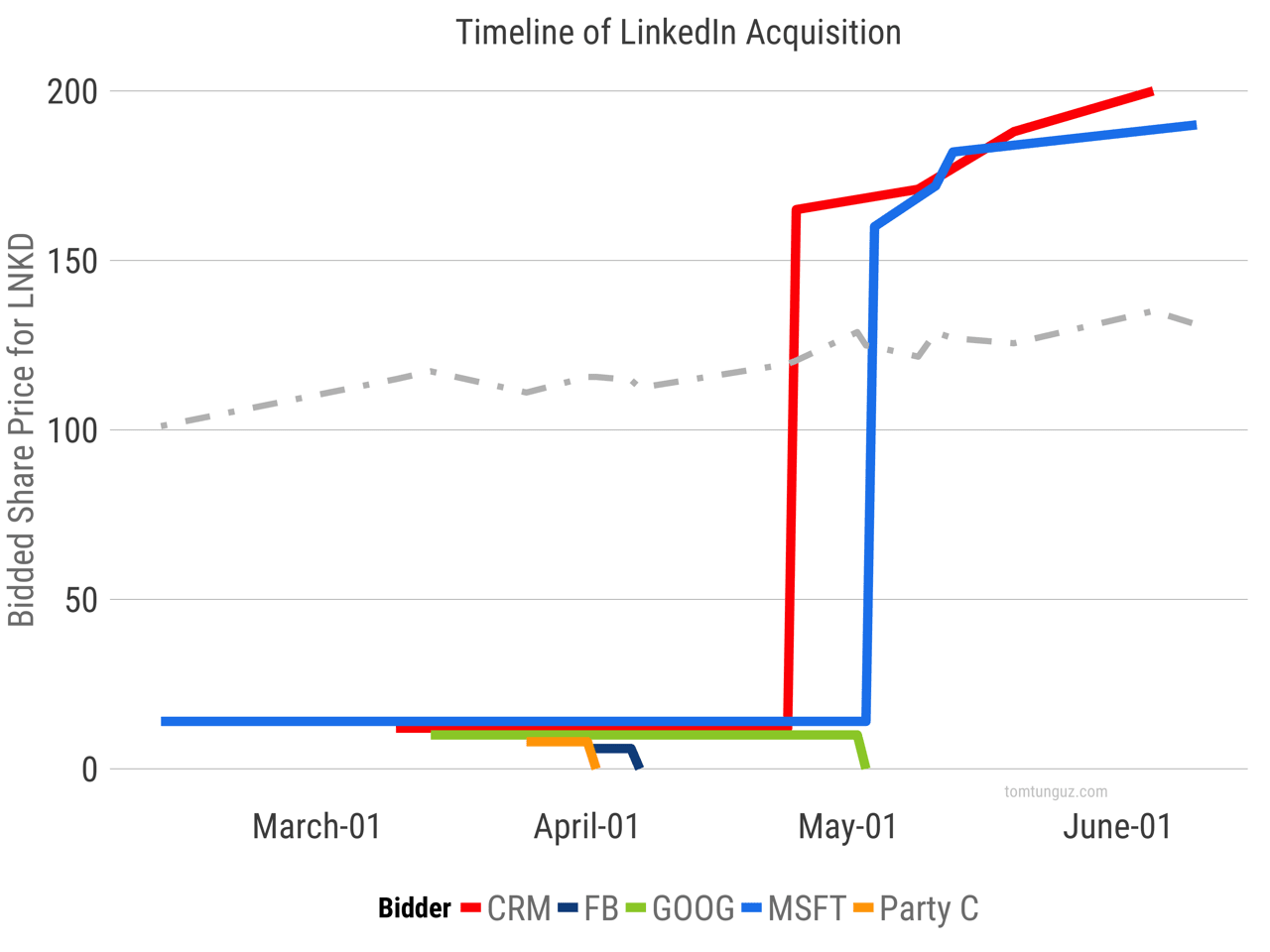 Public companies are often required to disclose the process of their acquisition. LinkedIn’s sale to Microsoft is described step by step in an SEC disclosure and it offers both a peek into how these massive acquisitions are consummated, and also illustrates the best practices for how to run a process, both acquisitions and fundraisings.

The timeline above shows how the deal progressed. Five potential bidders are included in the chart including Party C, whose identity is unknown. Note at the beginning of the chart, the bids for each suitor are illustrated as non-zero to separate the lines and make clear each suitor’s behavior. None of these suitors posted offers until May.

First, develop relationships with potential suitors long in advance of any transaction. Those relationships will empower you to call a potential buyer or investor and engage with them without having to develop trust and mutual understanding at the same time as trying to sell the business in part or in whole.

Second, when you decide to transact, list the five or six top partners. Approach one or two at the beginning to see if there’s interest. If the interest is substantiated, then engage the remainder. After having spoken to both Microsoft and Salesforce about a merger, Jeff engages three other parties: Google, Party C, and Facebook. When chatting with Satya Nadella, Jeff tells him: “although LinkedIn is not for sale, others have expressed interest in an acquisition.” There will be competition in the process.

Third, determine the serious bidders and guide them through the process by assisting diligence and building the perception of increasing competition. By mid-April, Salesforce, Microsoft and Google were all diligencing the merger, meeting with LinkedIn teams and discussing their strategy in the board room. Salesforce took an aggressive stance, bidding first.

Salesforce’s market capitalization of about $50B and cash position of about $1B meant that a combination would be closer to a merger of equals than a takeover by Microsoft or Google, both of whom are worth 10x+ Salesforce and whose cash positions could buy LinkedIn outright. Salesforce’s bids would be a combination of cash and stock, and Salesforce would likely have to raise debt to finance the acquisition. Like a contingency on a mortgage, this could have made Salesforce’s offer less attractive in comparison to a cash and stock offer from a competitor, perhaps influencing their bidding strategy.

In early May, Google bows out, leaving Microsoft and Salesforce as the two bidders. 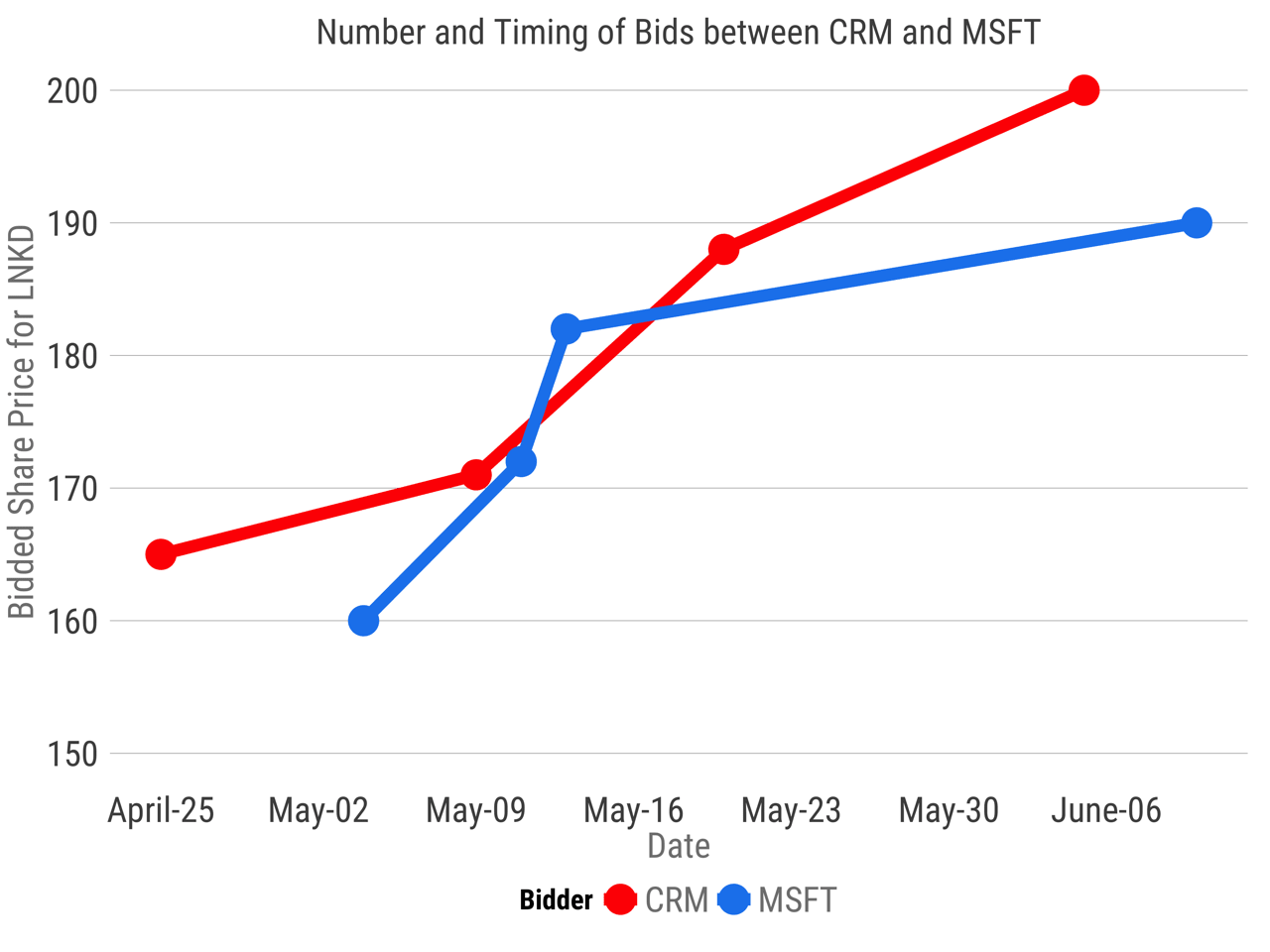 Fourth, drive the process to its conclusion. Two weeks pass before Microsoft bids, and they bid $160, five dollars lower than Salesforce. Over the next four weeks, both suitors perform more diligence, model the financial implications and build groundswell amidst the executive teams and boards to pursue LinkedIn more aggressively.

The resulting one-upmanship between Salesforce and Microsoft results in a 15% better price than the initial Salesforce bid and a premium to the public market share price of about 45%.

This is auction pressure and it’s a classic example of how to run a fundraising or acquisition process.