One of the best ways I’ve found to understand SaaS companies is to pore through their public filings. A few months ago, I analyzed Box’s S-1. In this post, we’ll look at HubSpot’s IPO filing and compare their journey to a public company with a basket of about 40 other publicly traded companies, in the hopes that this data will help other founders chart their path to IPO.

In the next seven charts, we’ll explore how HubSpot built their business. We will explore revenue growth, average revenue per customer, sales efficiency, payback periods, net income, gross margin and engineering spending. In these plots, I’ve used HubSpot’s colors as a consistent legend. HubSpot company data is orange, median values are black, and other company values are gray. 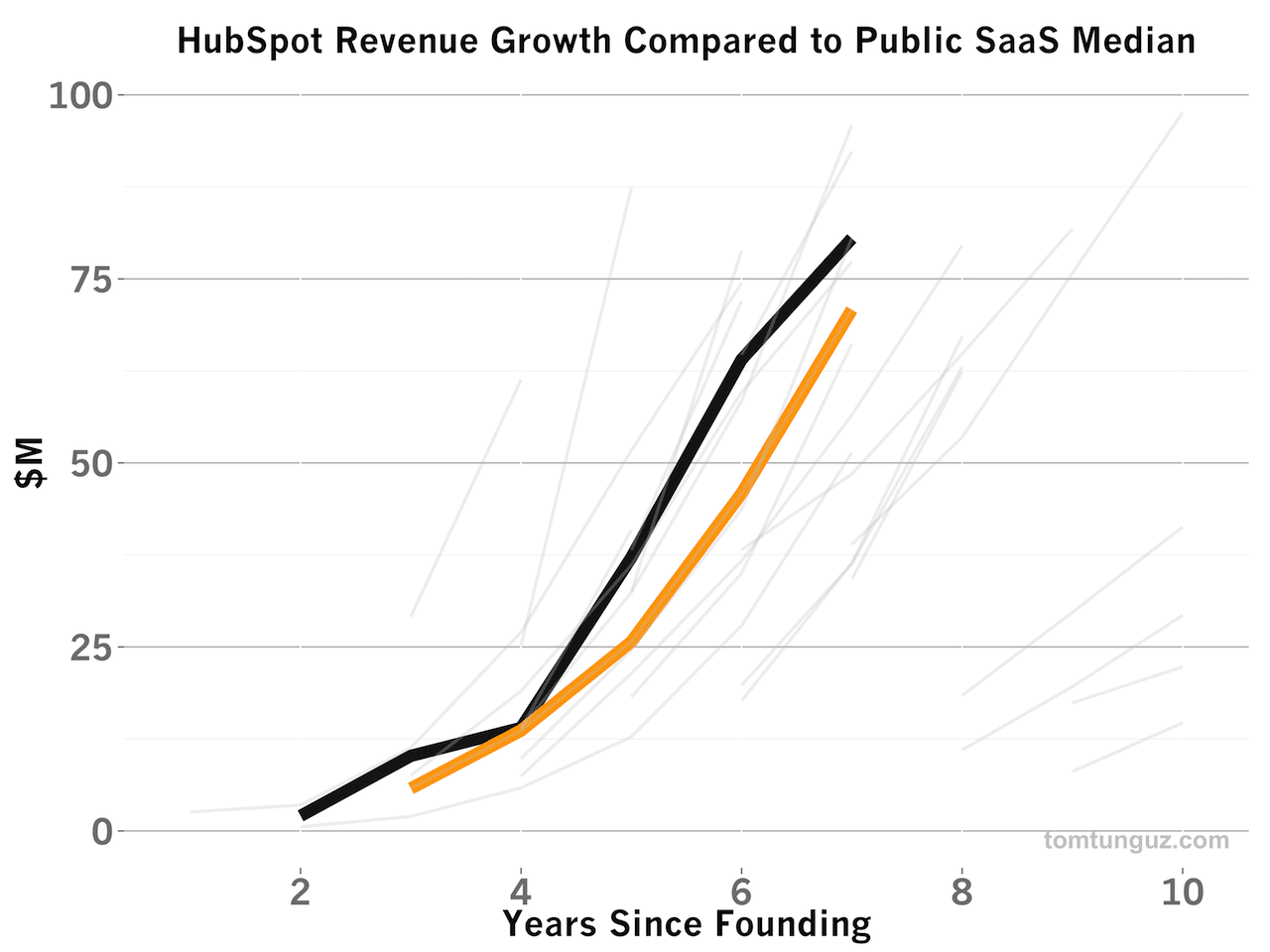 HubSpot has achieved amazing revenue growth in their first 7 years as a company growing by more than 12x from $5.7M in 2009 revenue to 2013 revenue of $71M - an 88% CAGR. HubSpot’s revenue trajectory is effectively identical to the median publicly traded SaaS company. 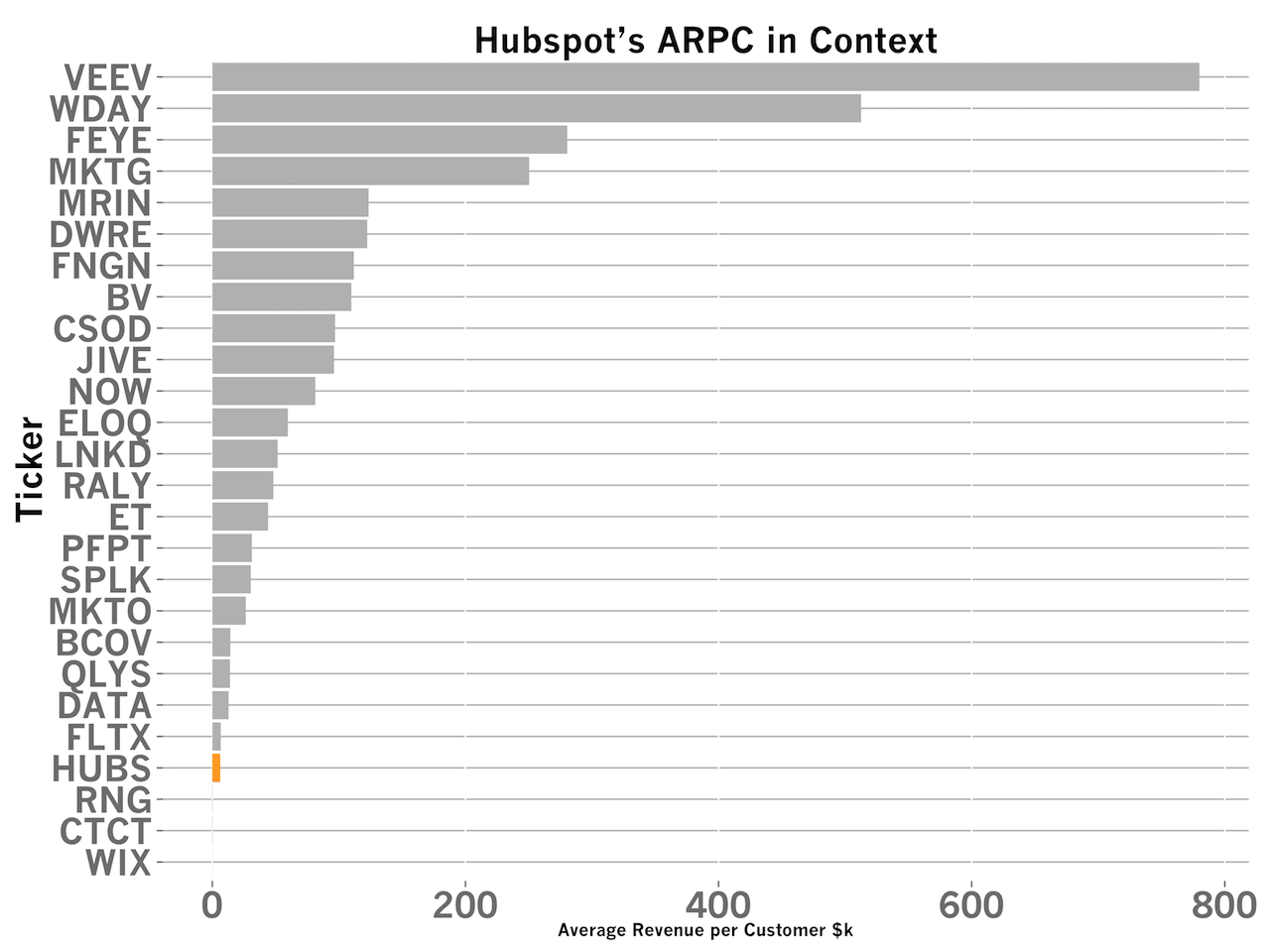 HubSpot’s average revenue per customer (ARPC) of about $7,752 is the fourth smallest of the companies I analyzed. HubSpot’s target customer base are SMBs and with this price point, it’s possible to support a profitable inside sales model if the team is very efficient. Only WIX, CTCT and RNG had smaller figures of $86, $265 and $352. FLTX, a maker of fleet tracking software, has identical ARPC. I’ve plotted a subset of them in the chart above.

* estimated from the first six months of the S-1

HubSpot is the second fastest SMB SaaS company to IPO yet, achieving the mark within 8 years. Most other SMB companies, defined for this analysis as having an ARPC of less than $15,000, took at least one more year to go public. Only WIX became a public company faster, achieving the mark in 7 years. Impressively, HubSpot has been able to record much faster revenue growth than other SMB SaaS companies. I’ve estimated $113M in revenue for 2014 by extrapolating their first six months of revenue this year and applying the 2013 growth rate to it. For comparison, DATA recorded $62M in its eighth full year of business, compared to $100M+ for HubSpot. 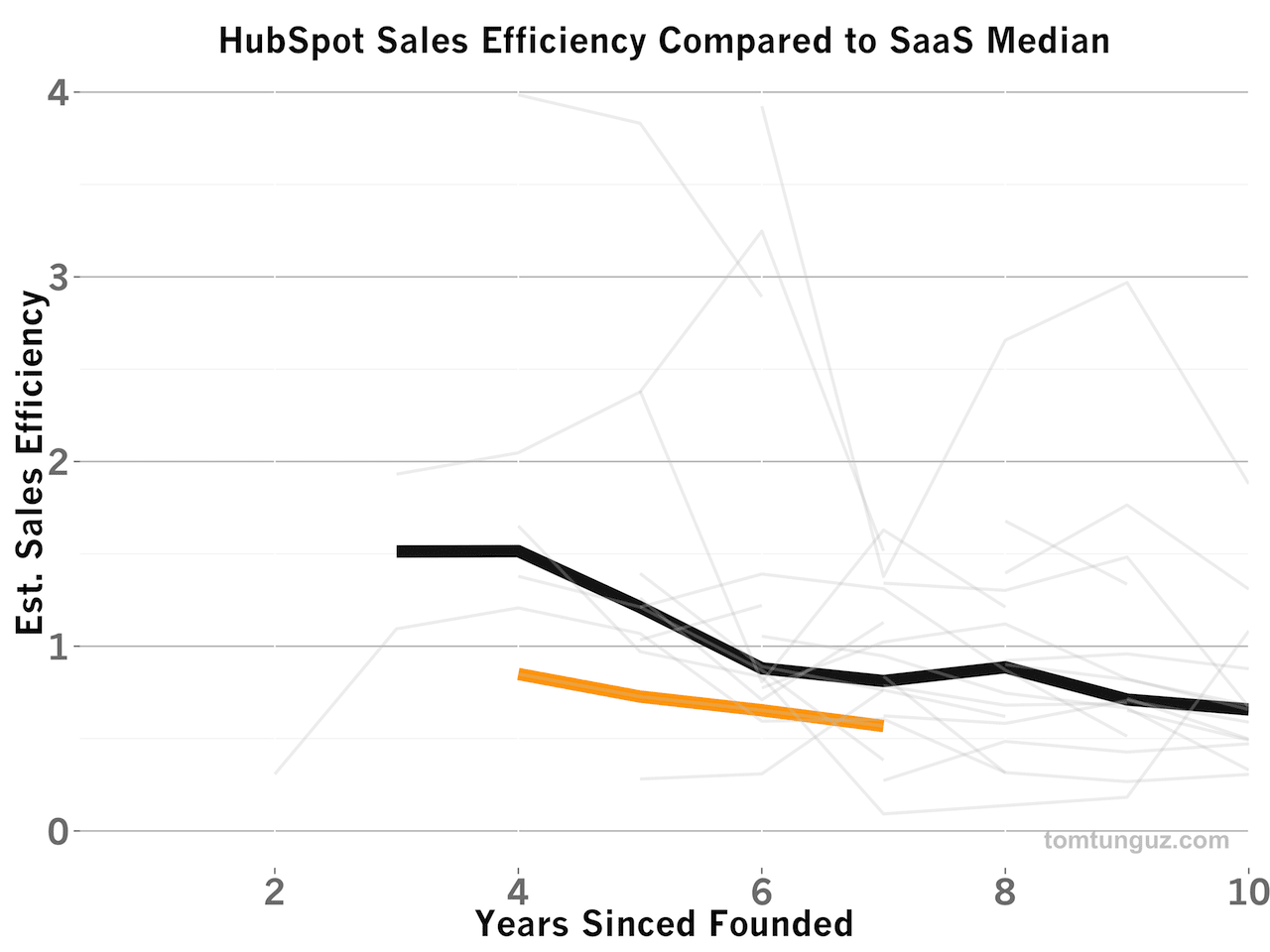 To grow at that pace, HubSpot has been investing aggressively in sales and the company is widely respected for its content marketing prowess. HubSpot’s sales efficiency, defined as the incremental annual gross margin divided by the sales, marketing and general expenses incurred in the previous year, is somewhat lower than the median SaaS company. In 2013, the company recorded a sales efficiency of 0.47, meaning about $2 of sales and marketing spend is required to generate $1 in gross profit and the payback period, the number of years before a customer’s revenue offsets the cost of customer acquisition is just over 2 years.

Above, I’ve copied the unit economics data from the S-1. HubSpot has been either pursuing larger customers or has become more effective at generating more revenue from the same customer base by cross or up-selling. Average revenue per customer has increased by about 44% in the past two years. But that incremental revenue costs about 75% more in customer acquisition costs over the same period. The net effect is that HubSpot customers must pay for about 2.4 years before they become profitable on a unit basis. Given the current revenue churn rates, about 70% of customers on a dollar basis will be break-even or profitable, so the unit economics work. 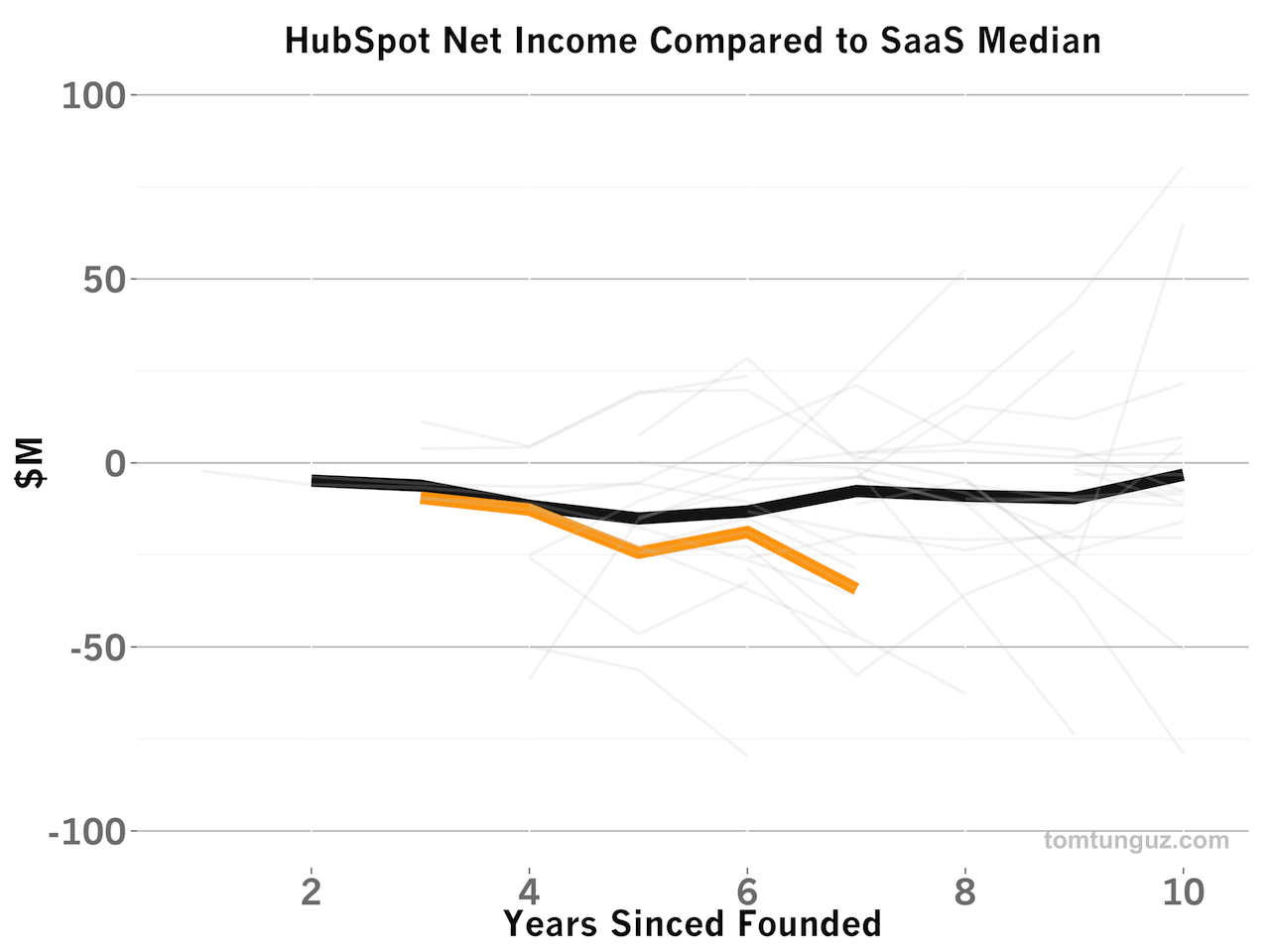 In the short term, the increasing costs of customer acquisition decrease net income. HubSpot must pay more to acquire a customers and as a consequence, the company’s net income in dollar terms is below that of the public SaaS median, meaning the company is burning more cash than the typical public SaaS company. But, because HubSpot generates more revenue than the typical public SaaS company in its eight year, it can afford to spend more total dollars on customer acquisition than other companies at a similar stage. 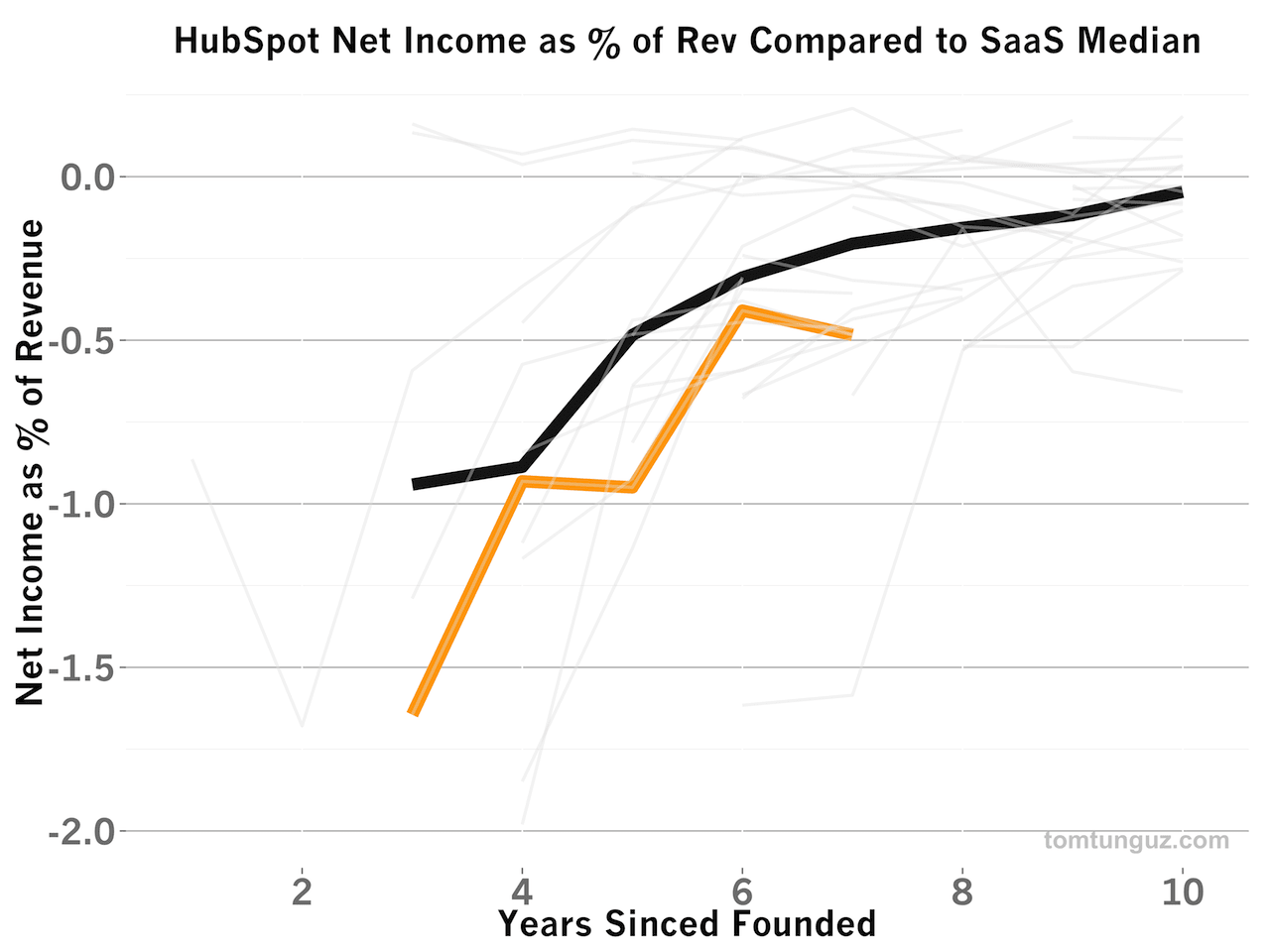 On a relative basis, however, HubSpot is closer to the median up until 2012. In 2013, with the big bump in CAC, HubSpot’s net income as a percentage of revenue fell. However, only 5 companies had more negative net-income-to-revenue ratios: NetSuite, Jive, Medidata, Box and Marketo. For the moment, HubSpot is among the least profitable companies in the set, but I suspect this is because the company is investing in growth. 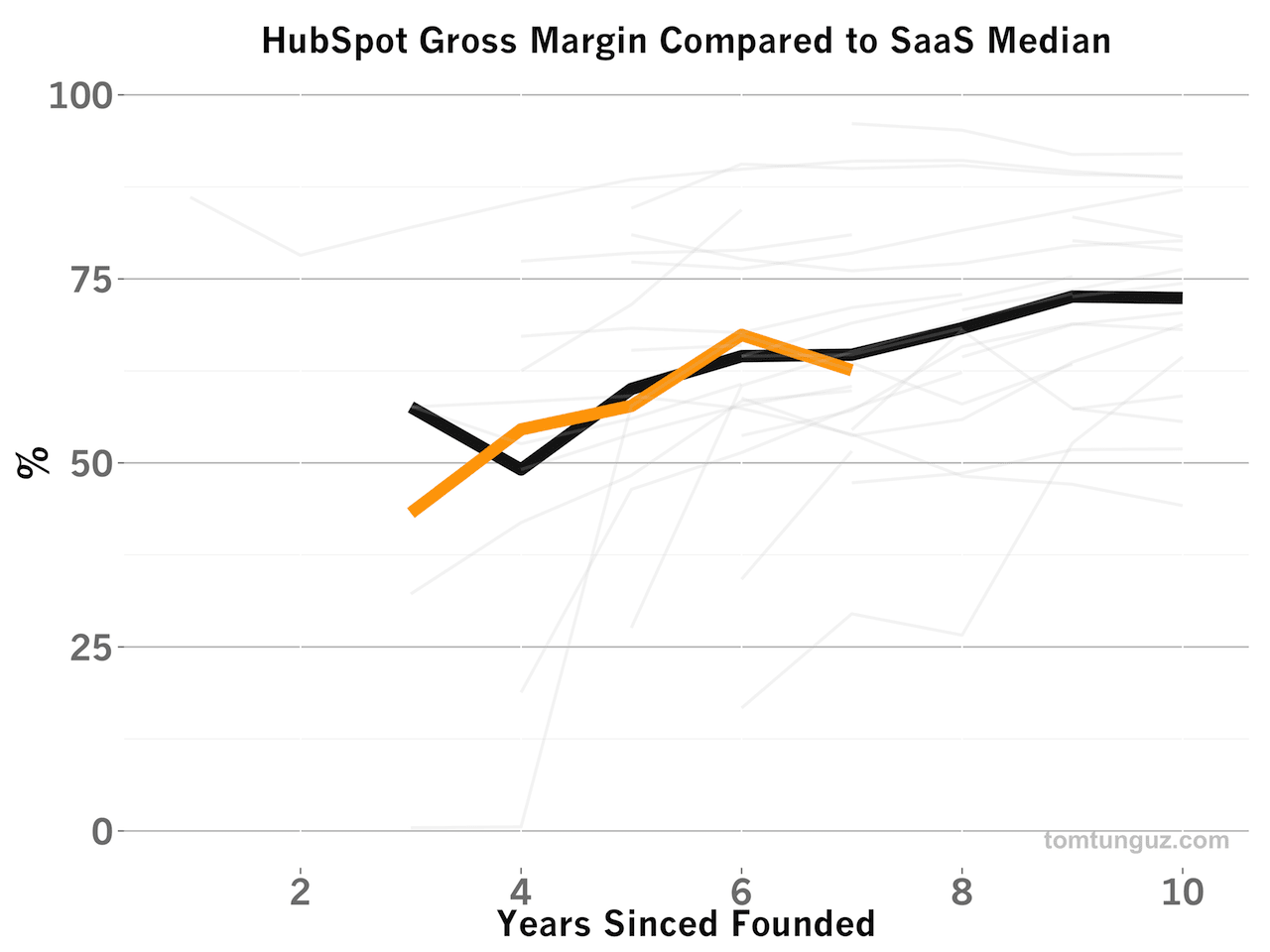 HubSpot’s gross margin percent is rapidly improving, and tracking the median. This means that HubSpot’s cost of revenue, which for SaaS companies includes hosting costs and customer support/success expenses, is right in line with comparable companies. 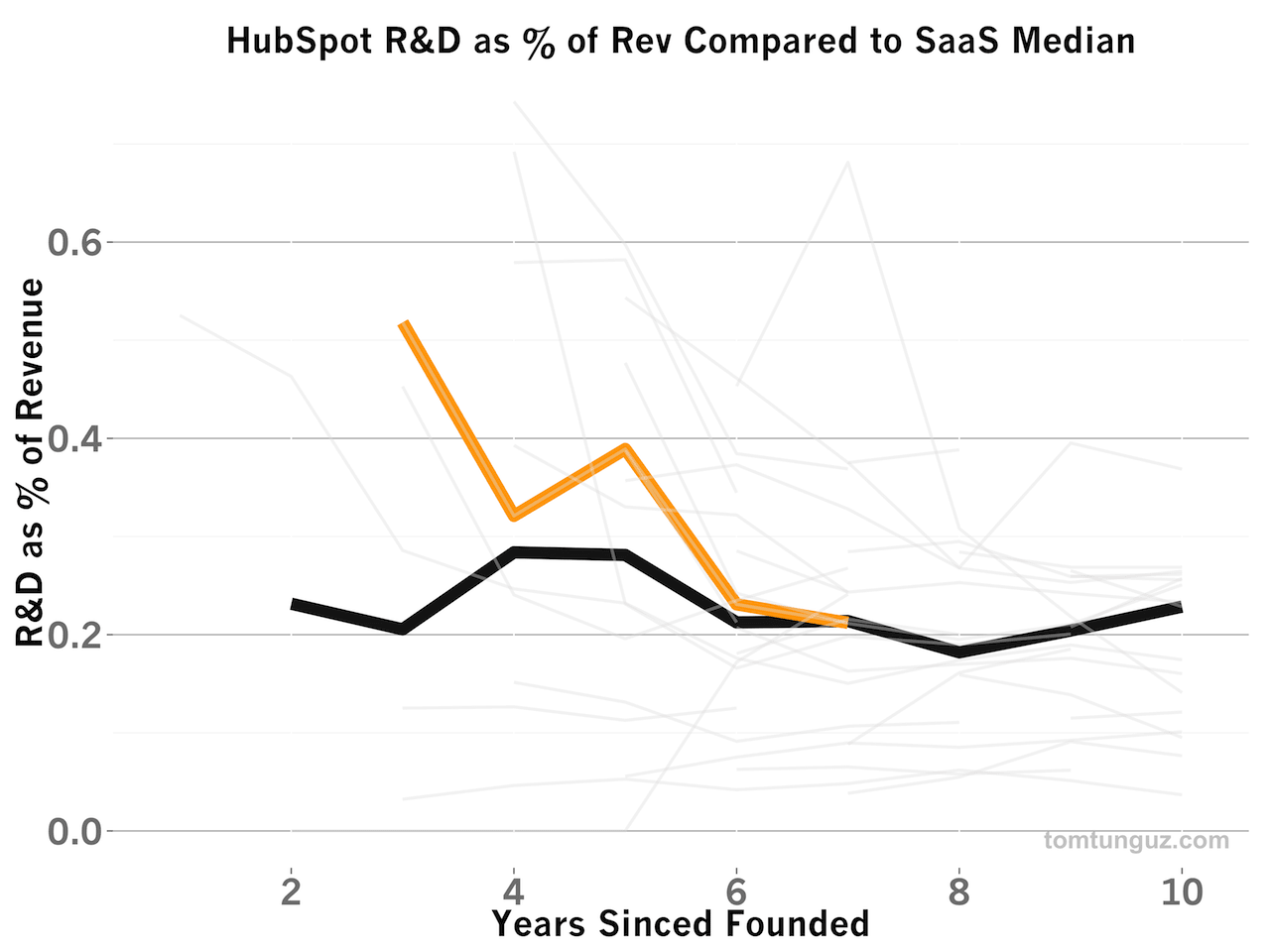 Last, HubSpot has historically invested more in engineering (R&D) than most SaaS companies investing more than 50% of revenues just a few years ago, but as the business has grown, HubSpot’s investment as a percentage of revenue has approached the median or about 20% of revenue.

HubSpot has always been a leader in SMB customer acquisition, in particular because of their tremendous ability to acquire customers through content marketing. The HubSpot team has been able to build an explosive business, one of the fastest growing SMB SaaS companies in history with this model. The HubSpot journey to a public company provides a terrific set of benchmarks for other SMB SaaS companies. I’m excited to see how the company’s story continues to evolve.

The Impact of a Startup's Location on its Acquisition Potential