The Implications of Raising a High-Priced Round

When we say a startup has raised a big round, we often mean the round is big in two dimensions - total amount invested and valuation. And when we say a big valuation, more precisely we imply the round was priced at a high revenue multiple. A SaaS company that will generate $400M in revenue next year that raises $200M at $1B valuation has raised a big round, but at low valuation-to-revenue multiple of 2.5x. In contrast, most high growth SaaS startups are raising at very high multiples, somewhere between 10-20x forward revenues. What are the implications of raising at a large multiple?

The startup’s founders have convinced investors of their company’s ability to grow quickly and predictably. Investors are willing to pay a price ahead of the company’s current fundamentals. Let’s look at the table below to make the point.

Across the top, valuation-to-forward-revenue multiples span 10x to 25x. Forward revenues means the sum of the next twelve months of projected revenue. From top to bottom, the compound annual growth rate of revenue varies from 100% to 400%. Within each cell is how far forward an investor is paying, relative to public market valuations.

Take a company growing at 300% per year. Suppose they attract an investment at a 20x forward revenue multiple. The investor has paid 0.6 years or about 7 months ahead. In other words, in 7 months, the valuation-to-forward-revenue multiple will be equal to that of the top-tier of public market SaaS companies. The investor implicitly believes the company will continue to grow at the same CAGR at least until that point.

While this doesn’t sound like a hugely risky bet, remember this is 7 months past the next twelve months of revenue. So, the investor is valuing the business based on the projected revenue the company will generate 19 months from now. Should the business not achieve its plan, then the valuation of the business could be mismatched to its valuation, creating a challenging subsequent fundraising. The more future-priced a round is, the greater this risk.

SaaS startups haven’t always been priced on forward multiples. Forward multiples are the most aggressive, because they assume the company will achieve its plan for the next 12 months. They assume very little execution risk. Since SaaS companies are subscription businesses, there’s a good argument that they are predictable assuming the macroeconomic environment remains stable. If/when the market should be more conservative, investors will likely revert to pricing companies on trailing revenues, rather than future revenues, which would change this math materially. 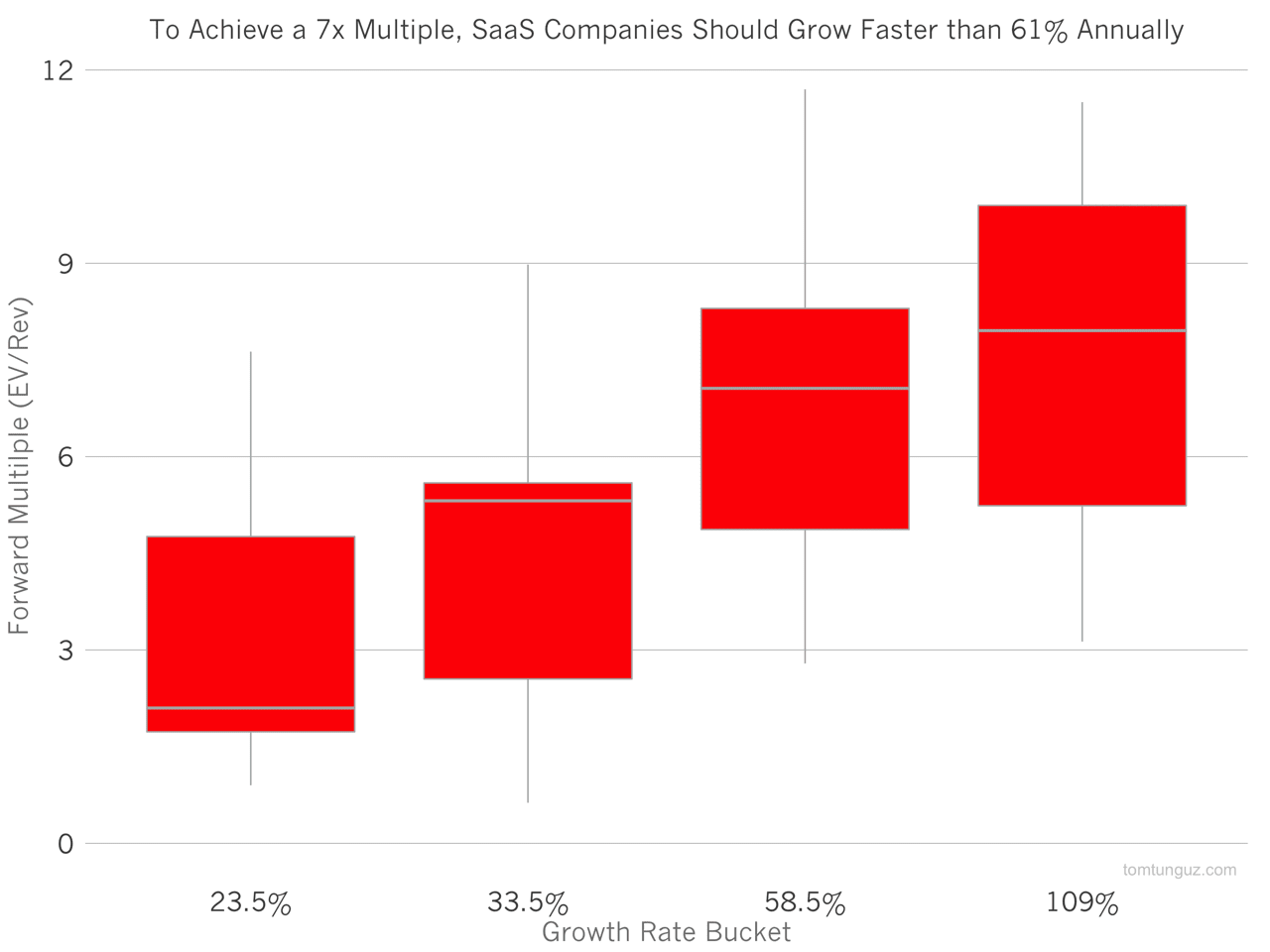 Public companies valuations, or market capitalizations, are updated each second as they trade on exchanges. They, too, trade on multiples. And the fastest growing, most attractive SaaS companies trade at 7.2x forward-revenue-to-enterprise-value while growing 80-90% per year. When a startup goes public, it will likely trade within that range.

The chart above shows the forward revenue multiple across the four quartiles of publicly traded SaaS companies. Clearly, growth is an important determinant of valuation. 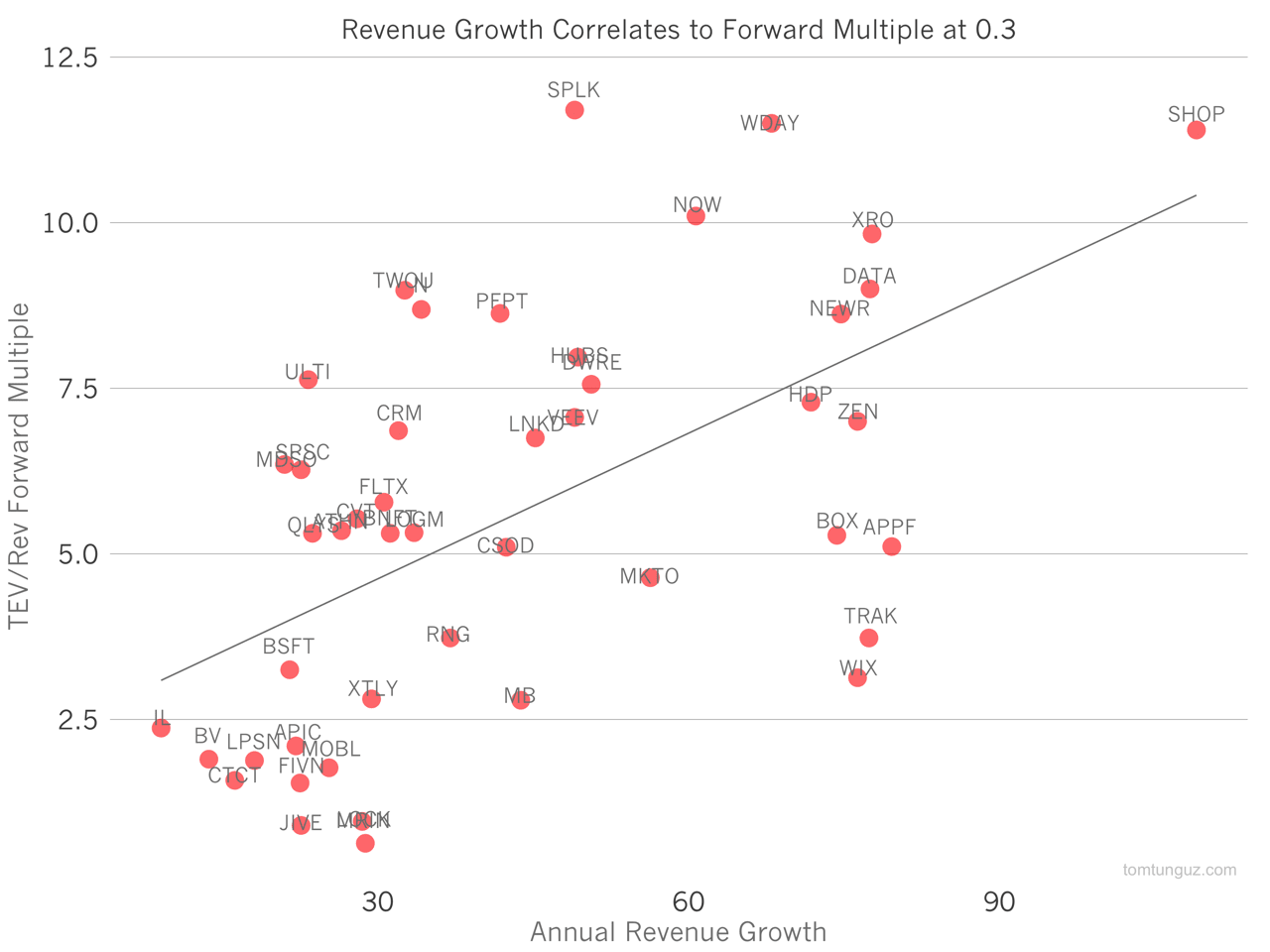 In fact, growth influences public SaaS companies valuation more than any other metric. It’s 6x as correlated as gross margin and 7.5x as correlated as profitability. This is true in the public markets and the private markets.

So, how does a company entice an investor to pay as far forward as possible? Forward multiples increase when investors believe a business to be predictable - investors are assuming the execution of the business will achieve or beat plan. In addition, there are many other important attributes to convey about the business: competitive barriers to entry, sales efficiency, credibility of the team, ability to pitch, strength of the brand, attractiveness of the category, unit economics, the depth of the sales pipeline, churn and sales cycle.

When startups raise big rounds, they’ve convinced investors their company will continue to grow very quickly and very predictably far into the future.

Why Startups Are Growing Faster Today than Ever Before