We are Lent into Each Other's Keeping 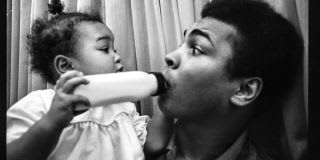 Esquire writer and master storyteller Cal Fussman describes the experience of interviewing his childhood hero, Muhammad Ali, in a podcast with Tim Ferriss. Fussman spends a week with Ali, during which he the Special Olympics and boxes with the great champion. But there’s one story that stood out to me.

Fussman and Ali must catch a plane, but they are running late. Later in his life, Ali suffered from Parkinson’s disease, which slowed him significantly. Fussman is worried about missing the plane, and is trying to hurry them through security.

Just then, a woman pulls a camera from her purse to take a photo with Ali. Ali stops, walks towards her and takes several photographs with her, before continuing on.

When Fussman asks Ali why he did it, Ali replies, “That was likely the only opportunity she would have to take a photograph with me. I wanted to make sure she had the one she wanted.”

Certainly, the experience gave Ali some satisfaction, but as Fussman relates in the interview, the empathy Ali showed impressed him the most.

Fussman confesses in the podcast that he respected and admired Ali more after having met him - something that doesn’t happen with many heroes.

The entire story reminded me of an old friend who often tells me, “We are lent into each other’s keeping.” Our time with each other is borrowed, it’s duration is unknown, and that uncertainty make it precious.

Ali recognizes this uncertainty, and finds a moment to show empathy, understanding and be kind.

Fussman ends the interview with Ali asking him for words of wisdom. When Fussman asks, “How you define evil?”, Ali replies, “Unfriendliness.”

As I’m rushing through my days, trying to make a plane or get to the next meeting, I think about Ali, hobbled by Parkinson’s, the best known celebrity of his generation, dancing through the airport, still taking the time to be kind to a stranger.

We are lent into each other’s keeping.

The Narrowing of SaaS Valuations