The Single Best Content Marketing Channel for Your Startup

Thirty days ago, I began an experiment with this blog to determine whether email, Twitter or RSS would be the better content marketing channel. My goals with RSS, Twitter and email are two: first to maintain a relationship with a reader longer than a single website visit by creating a communication channel and second to use that marketing channel to drive re-engagement.

Below, I’ve analyzed the results and come across some surprising findings. First, RSS subscribers generate more traffic than email subscribers. Second, email readers are much easier to win than RSS readers. Third, email and RSS subscribers tend to be very different audiences and these channels do not cannibalize each other. Fourth, Twitter’s performance on a unit basis pales in comparison to its competition, but makes it up in volume.

Note, the code to perform a web, rss and email analysis is at the bottom of this post, in case you’re interested in analyzing your startup’s content marketing effectiveness.

The most effective content marketing strategy is to combine Twitter’s distribution capacity with email’s conversion rates and broad applicability.

Other Interesting Data Points from the Analysis

The Story in Charts

Traffic is indicated in gray, new subscribers in red and unsubscribers in blue. Email signups are volatile and aren’t tightly coupled to traffic, meaning the blog fails to convert many new visitors driven by large volumes of retweets or HackerNews traffic spikes to subscribers. ![image](https://res.cloudinary.com/dzawgnnlr/image/upload/q_auto/f_auto/w_auto/image_14_285062039)

This chart shows share of traffic by channel. Email has grown from about 0 to 15% in 30 days. RSS is also growing and has reached about 20% of page views. Twitter represents about 23% of traffic. On an average day, about 55 to 60% of traffic is brought to this blog through reader marketing channels. The figures are incredibly volatile, however. 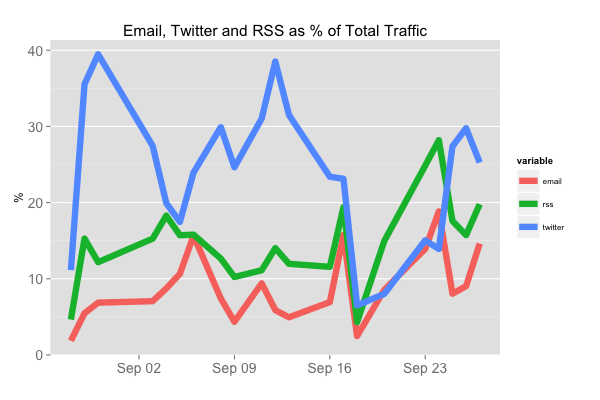 The Chimp project on Github contains all the R and Ruby code and instructions to replicate this analysis: https://github.com/ttunguz/chimp

What Your Startup’s MRR Figure Is Hiding