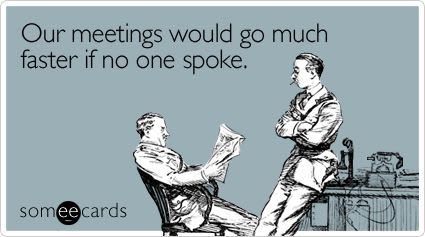 A friend suggested that I read the Five Dysfunctions of a Team over the weekend. Though I’m passionate about business books, I rolled my eyes. I had seen this one on best seller lists for a long time, and never thought it would have much to offer. I admit my book-cover bias was wrong. The author has a counterintuitive assertion. Meetings shouldn’t be boring.

The book is a fable, describing the journey of a new CEO, Kathryn, who takes the helm of a struggling high-growth startup. She brings her management team on a series of off-sites. During one of those conversations, she says:

Let me assure you that from now on, every staff meeting we have will be loaded with conflict. And they won’t be boring. And if there is nothing worth debating, then we won’t have a meeting.

I’ve been in about 15 years worth of meetings and I tried to think through the reasons why a meeting is boring. I’ve run many boring meetings, too. I came up with five :

The book focuses mostly on the fifth problem, and describes how the team develops a culture that encourages debate. This is the most serious challenge. Everything else can be quickly corrected, but massaging a culture to encourage active debate by creating an environment of trust and respect is no easy feat.

I agree with the assertion. I imagine if every meeting were filled with conflict and debate, each would be interesting in its own way. And, ideally, meetings are convened to solicit differing opinions, to drive to an ultimate best decision.

The reality is a bit more varied. We use meetings for many different purposes. All hands meetings, status update meetings, one on ones. In many of those cases, conflict isn’t the purpose. Guiding someone’s career or informing a company about recent developments don’t necessarily have a lot of intrinsic conflict. But they should be interesting regardless.

I went through a phase when I read lots of books about how to present well. One of the ideas that has stayed with me is the amount of time people invest in a meeting. If I call a meeting for seven people, that’s eight hours of collective time, which is expensive. If I present to 1000 people for 20 minutes, that’s 334 hours of human thought. That’s why preparation is so important. Ultimately, running an effective meeting boils down to respect for the time of others.

I like the bold assertion that meetings shouldn’t be boring. If they are, there’s an issue.

Managers Must be Insane to Brainstorm in Groups