The Most Successful SMB SaaS Acquisition Channel Ever Built 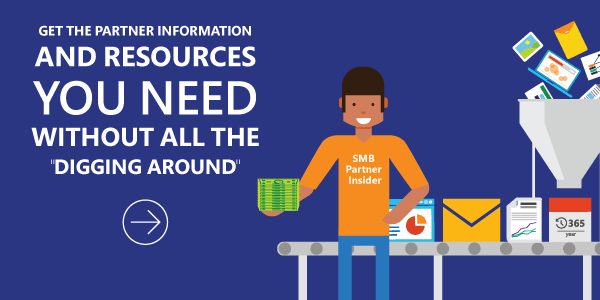 Channel distribution represents one of the biggest and most important changes in customers acquisition for SMB SaaS startups in quite a while. Historically, channel distribution has been reserved for the most expensive software and hardware. IBM, Intel, Cisco and their kin generate more than 80% of their revenues through a universe of resellers and distributors.

As many of these channel partners move to newer distribution models, the brokerage channel model in particular, they represent an efficient and leveraged customer acquisition channel.

One of the most interesting examples is Microsoft’s Office 365 SMB business. It’s the most successful SMB SaaS acquisition channel ever built.

Microsoft adds 50,000 small businesses as customers each month. Overall, for Microsoft 95% of revenues are derived from channel. “Although each type of reselling partner reaches organizations of all sizes…distributors resell primarily to VARs, and VARs typically reach small- and medium-sized organizations.” Microsoft 2016 Annual Report You can read more about IDC’s analysis of Microsoft’s channel structure here.

Thomas Hansen was Worldwide Vice President of SMB at Microsoft. He and his team were instrumental in developing the explosive growth potential of the channel in serving the SMB. Today, he’s replicating that success at Dropbox.

Recently, I had an opportunity to chat with Thomas about his experiences and I asked him to write about SMB SaaS channel distribution for this blog because his perspective on the opportunity is unique. After all, he’s built the most success SMB SaaS channel ever. Thank you, Thomas, for sharing your insights.

Modern companies are born in the cloud, and independence is in their DNA. Many start by following self-service distribution models as a route to market, which have served as the de facto standard for helping cloud businesses grow. With customers coming to their (virtual) doorstep, these cloud companies are free to scale at their own pace, expanding sales and their reach in the marketplace.

But sometimes that independence comes at a cost — an opportunity cost. With a self-service model, customers who have more specific needs are left in the cold. As a result, the next step for cloud companies is generally to build their own outbound and inbound sales force as a way to foster and manage relationships with customers. This presents its own challenges, as it typically is resource intensive and at least initially has unit economics that at best is challenging. At this stage many executives ask themselves: “Is there a more efficient way to reach customers?”

The answer is not that obvious, but there is a better way. There are approximately 100 million businesses worldwide that are supported by a reseller ecosystem, consisting of half a million reseller companies. These resellers, in turn, employ literally millions of sellers, each effectively operating as an outsourced sales team for the cloud companies they service. Cloud software vendors that operate through partners in the channel are in a position to reach far more markets than they would on their own, and at a much faster pace. And while turning to channel resellers may seem decidedly old-school, working with partners will give cloud companies the agility they need to spread the word about their services on a broader scale, and gain new customers in new markets and new industries, and importantly at unit economics that scale positively fast.

In today’s world, the cloud isn’t just the future — it’s the bedrock on which modern companies are built, and a key component of the business strategies of many titans of the software industry. Let’s look at Microsoft. Four years ago Microsoft launched Office 365, a subscription-based delivery model for their flagship product Office, and turned to partners in the channel to scale worldwide. On their FY 2016 Q4 Earnings call, Microsoft announced that Office 365 revenue was up 54% year over year, with strong adoption across all segments. Additionally, nearly 90,000 channel partners now deliver Office 365 to small and medium businesses around the globe. That’s a 25% increase in channel partners year over year; those partners have contributed to Microsoft’s growth in the market, contributing more than 50,000 customers a month, for 28 consecutive months.

Could Microsoft have driven this level of momentum without turning to the channel reseller market? Perhaps. But not without time, and resource-consuming investments to dive headlong into unfamiliar markets, and establishing relations with disparate SMBs who may prefer a more hands-on relationship with a trusted, local advisor.

The aforementioned 100 million businesses around the world that turn to a reseller ecosystem do so to embrace the cloud technologies that will help them drive their own futures. In a recent global study by the Boston Consulting Group, small and medium-sized businesses that adopted the latest IT tools and cloud services grew revenue, profitability and jobs measurably faster than their less tech-savvy counterparts. These small, lean organizations often don’t have the resources to field a full IT team, turning instead to their existing relationships in the channel for all of their IT needs. By also turning their attention to the channel, cloud companies can reach these SMBs and extend their reach without overextending their resources.

The potential extended reach that channel resellers can provide is considerable. Dropbox, for example, works with distribution partners like Ingram Micro, which has a dedicated global cloud team to drive sales readiness and results for SaaS. They’ve also made investments to improve SaaS adoption for their reseller communities. For example, late last year Ingram Micro purchased Odin, an automation platform that streamlines and simplifies the SaaS reseller experience. Through the Odin acquisition, Ingram Micro has gained a fully automated marketplace and can reach even more markets, enabling thousands more resellers.

That extended reach means more potential customers for Ingram Micro’s partners. For Dropbox, that partnership with Ingram Micro means being able to go to market with fewer direct costs, and less overhead in the future. The global reseller ecosystem becomes crucial here. With many companies around the world looking for local, trusted reseller partners for IT advice and supply, turning to the channel can help cloud companies like Dropbox scale meaningfully.

What’s in it for you: Embrace the channel

With SaaS, resellers will deliver value-added services, such as implementation, data migration, training, and customer support. Customers will enjoy lower initial costs, and lower overhead costs thanks to minimal IT needs. And SaaS offers seamless integrations between thousands of products, so resellers can create best in breed solutions that serve their clients best.

Early to mid-stage cloud companies are typically also faced with the dilemma of how to expand globally, outside of their core markets. Scaling through the channel, leveraging the global infrastructure of distribution partners, enables you to gain global coverage without having any resources outside of your home market, essentially outsourcing your global channel enablement, marketing, sales and support to a distribution partner.

The notion of when to get engaged, when to start working with a distribution partner isn’t all that obvious. Whilst on the one hand the benefits may seem obvious to your company, there also has to be a clear win-win-win in it for the distribution partners and the resellers.

To get started consider hiring in leadership talent that has worked in the reseller channel before, and who has successfully build a channel program from the ground up before. Moreover, engage with the cloud practices of the leading distribution companies such as Ingram Micro, Synnex, Tech Data Corp. and Westcon. Those simple steps, as well as some basic research to understand industry best practices for how to start, resource and run a channel program, should enable you to getting started.

The cloud is no longer a mystery. SMBs around the world are embracing the cloud as a means to drive growth and revenue. For cloud companies seeking to maximize their potential and reach businesses whose needs aren’t met by traditional direct outbound sales or self-service models, weaving the channel into SaaS distribution efforts will deliver real results.