The Narrowing of SaaS Valuations 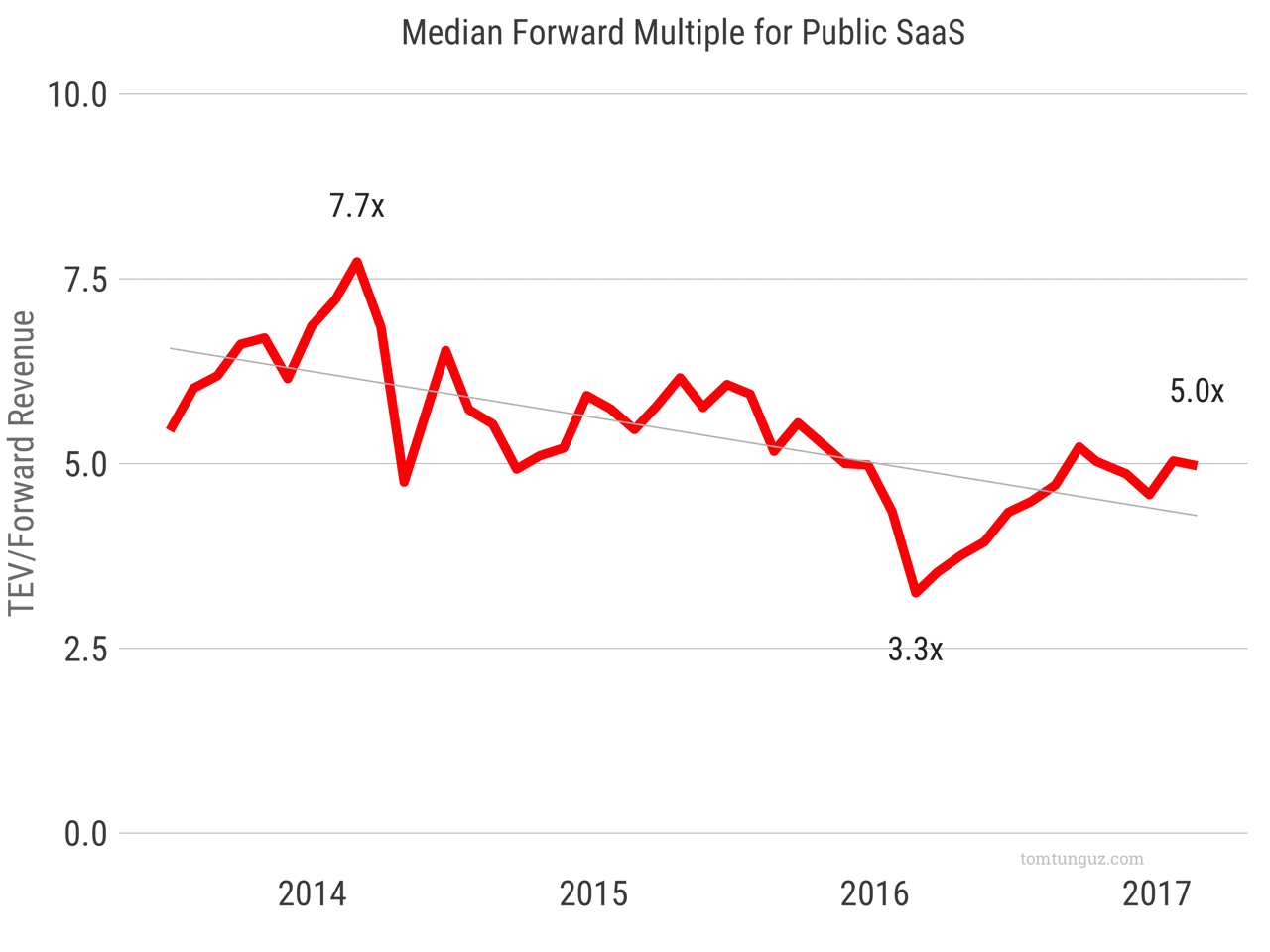 The public markets have changed the way they value SaaS companies. The median forward revenue multiple for SaaS business reached its peak in February 2014, fell to its nadir two years later, and has since recovered, hovering at around five times forward revenue – where it has remained with little variance over the last six months. However, that’s not the whole story. 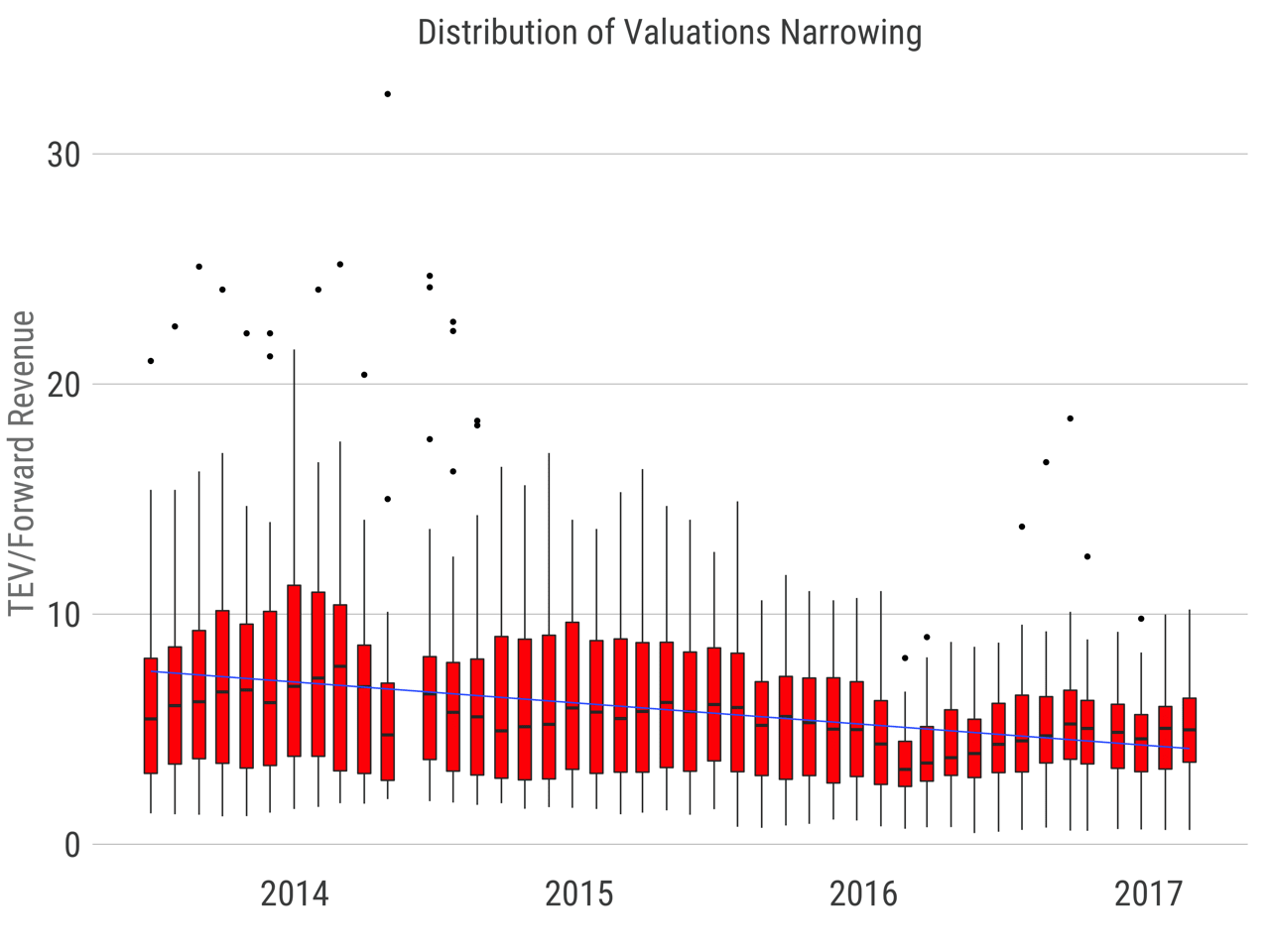 It’s not just that the median has fallen. Rather, every SaaS company is now being valued in a much narrower range than even a few years ago. In 2014, forward revenue multiples ranged from 1× to more than 20x. There were lots of outliers, marked as little points in the box plot above.

And the whiskers extended at least to 15x. Those whiskers show the distribution of valuations within two standard deviations of the mean.

Starting in the beginning of 2015 however there is been a marked compression. The whiskers now only extend to 10x, and the smattering of outliers has all but disappeared. 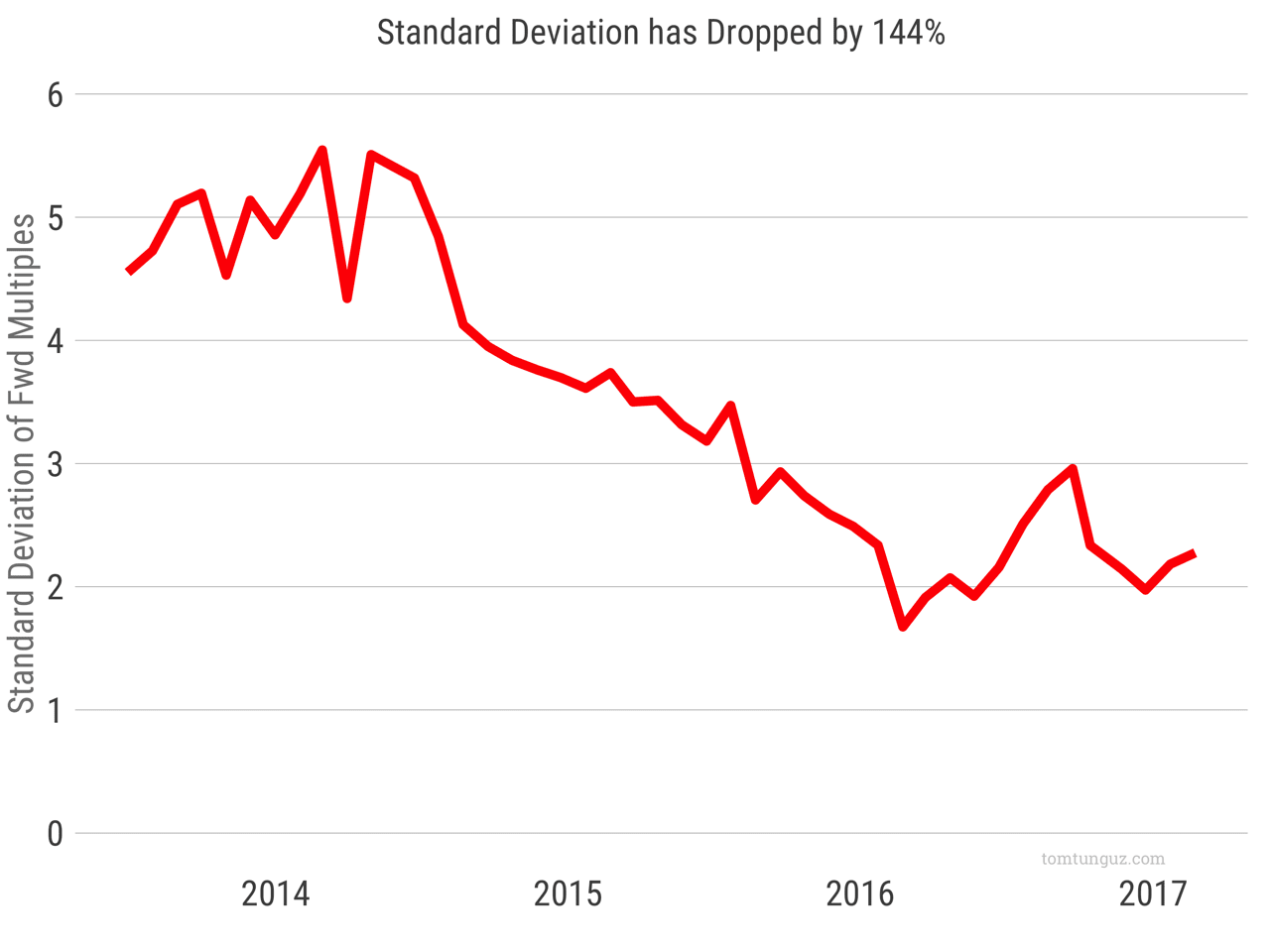 Here’s another way of looking at that trend. The chart above shows the standard deviation of forward multiples over the same time period. It has fallen by 144% in four years.

Why are valuation ranges so much tighter than they used to be?

There are two ramifications. First, public market investors have become more sophisticated in understanding these businesses and valuing them. These public companies are incorporating more SaaS metrics into their public filings, like dollar expansion and dollar retention.

Second, many of the iconic SaaS companies’ growth rates are slowing as they scale, a natural evolution of the business.

In addition, there haven’t been many next-generation software companies going public. These newcomers would have substantially higher growth rates than their older brothers, and would command higher multiples.

With tens of companies lined up to go public this year, we should see some expansion in these multiples.

In contrast, the M&A market is setting new highwater marks for valuation multiples. Cisco paid the largest forward multiple of any acquisition earlier this year when they bought AppDynamics. What’s more, they exceeded the high watermark by 50%.

With acquisitions now representing about 80% of startup exits, perhaps those valuation multiples are more representative of how SaaS companies should be valued. Especially since the basket of public SaaS companies is now dominated by older incumbents, whose growth rates are substantially smaller than this generation of growth stage disruptors.