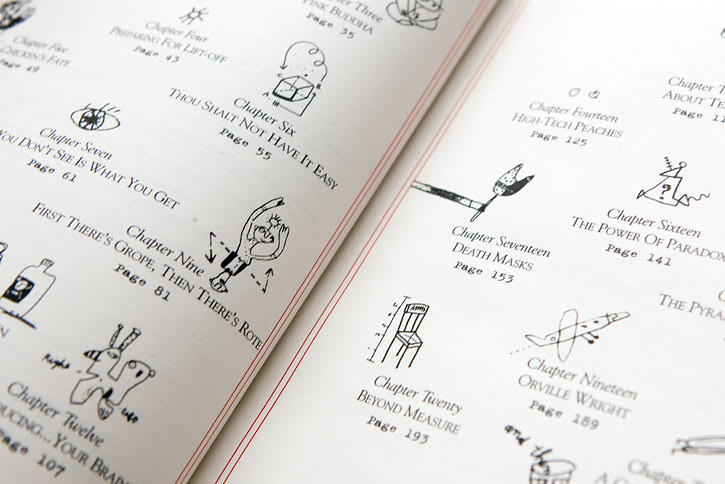 Orbiting the Giant Hairball is one of the most unusual business books I’ve read. It’s irreverent, full of drawings, and completely chaotic in the most wonderful way. Gordon MacKenzie, the author of the book, worked at Hallmark cards for 30 years to the day. He started initially in the creative department imagining greeting cards and ultimately found himself with the title Creative Paradox. In his book, he described the way he injected creativity into his working life. I thought it was a great book with three salient themes.

The book’s unforgettable title may be the only one in the business section of the bookstore with the word hairball. Gordon contends that all companies are hairballs. Each person, each problem, each process adds to the hairball and creates a gravity, a permanence, in the way that the company operates. Because it’s such an intertwined thing, the hairball impossible to unwind. So, in order to succeed in companies, he argues we need to operate outside of this hairball. If we orbit the hairball, observe how it works, but live in our own world then we can be happy and successful. Orbiting means redefining the scope of our jobs and the ways that we accomplish our goals. Hence the title.

Creativity is another important topic Gordon explores. Responsible for creating seminars, workshops and generally getting people inside Hallmark to expand their mindsets, Gordon is a believer in nonlinear thinking. There is an important tension inside of businesses, and particularly startups. At the beginning of the company, the founders are trying to create something out of chaos, and transform non-scalable actions into highly scalable processes. This is an evolution from nonlinear to linear thinking. But, it’s important for companies to revert back to nonlinear thinking often; that’s how creativity is born.

In a chapter called First There’s Grope, Then There’s Rote, Gordon describes the way he developed a creativity workshop for the Hallmark management team of the company. Gordon held a three hour session - a chaotic, creative, tactile environment, called “Grope,” that challenged people’s notions of work. The first workshop was a huge success. To prepare for the second workshop, Gordon used his notes from the first. But the second one failed, because it had become a product of the process. it was the same as the first In his words, it had become rote, linear, uncreative. So he reverted to chaos and the success continued.

Last, Gordon recounts a story about the cultural toxicity of teasing and criticism. When hosting a workshop for team of salespeople, he asks everyone in the room to use some crayons and a piece of paper to draw some representation of what they do at work. When a woman in the back of the room decides to share, she comes to the front of the room and begins to draw. Immediately, members of the audience critique her drawing skills. Gordon contends this kind of criticism is a mechanism to force people to revert to the norm, to be like anybody else, and is poisonous to creativity.

What’s wonderful about this book is that it characterizes the point of view of a cultural iconoclast within a large company. These perspectives stretch the reader’s mind about what culture ought to be, and how to break out of the every day in order to engender creativity. It’s not to say that process and prioritization aren’t important - they are critical - but rather, they must be balanced.

There are no frameworks, no best practices, just a collection of stories and drawings that articulate thought-provoking points of view. It’s a wonderful book to help founders and “number worshipers” like me rebalance our world-views.

The First Generation of the Talent Software Wars