Peak Smart Phone - What Happens to the App Economy When Smartphone Penetration Reaches 100%?

We’re already seeing the impact to hardware vendors of peak smart phone. Over the past six months, Apple, Samsung and HTC share prices have fallen 20 to 25%. These share prices have tumbled because smart phone penetration is hurtling towards 70% in the US. True saturation has occurred in certain segments: 87% of 30 to 49 year olds with income greater than $75k own a smart phone.

Does the app economy suffer from the same challenge of decreasing growth as hardware?

Below is a chart depicting iOS app download patterns by users over time. The average number of apps downloaded per month and lifetime downloads have remained flat over the past four years and may even be declining.

This data supports the conclusion that smart phone user demand for apps is linear. This means the total monthly app download volume in the US should be about 800M apps (330M people x 2.4 app downloads per month). 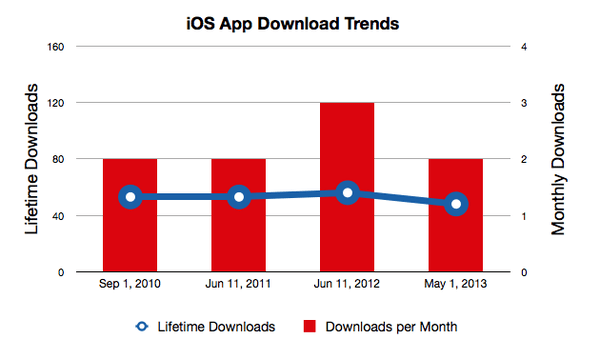 We haven’t reached this point of saturation in any market yet. This year, only six countries will exceed 50% smart phone penetration according to eMarketer. But given the growth rates of phone sales, peak smartphone should be upon us in the next 18 to 36 months.

When we do hit peak smart phone penetration, how might the app store dynamics change? It’s hard to know before it happens but here are a few thoughts.

It’s too early to tell what the fuller impact of peak smart phone might be, but at least in the US, it could be around the corner.

A note about the data: I calculated this data by first finding app store and iOS sales figures for each year from Apple. I then assumed the total number of active devices in a period was about half of the preceding period (smartphone replacement cycles are 22.4 months) and then divided the app downloads by those active devices. Full data is published here