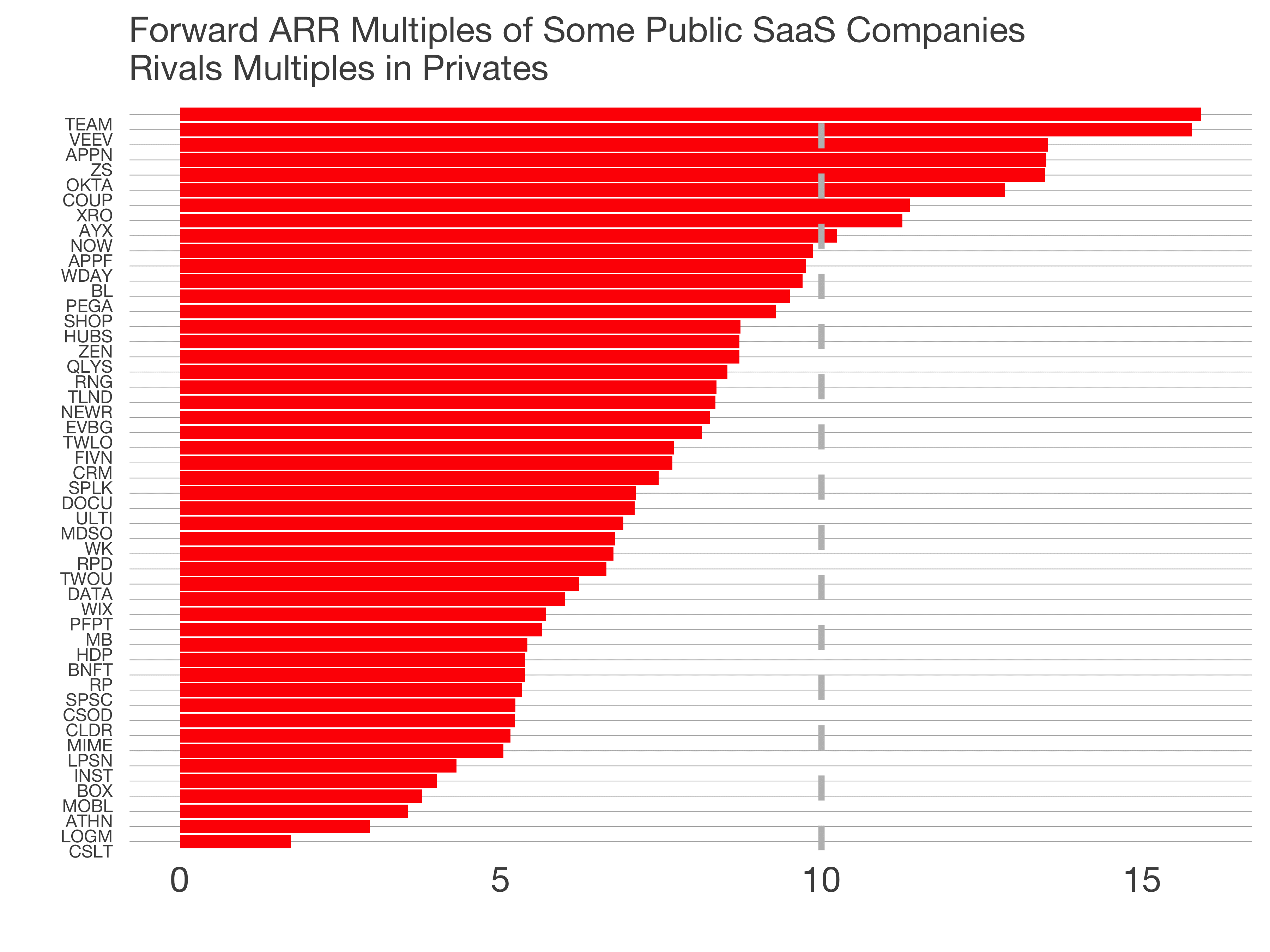 I’ve written quite a bit about the public market software multiples. They’ve increased to near historic levels with forward revenue multiples approaching 9x. As the public markets have appreciated, something has happened that I didn’t expect. Some public companies are now fetching the mulitples of the most attractive private companies. I thought valuations between the markets would normalize because of a deflation in both public and private. Today, we have the beginnings of normalization by inflation.

In the private markets, high growth software companies are often priced as a function of the ARR at the end of next year. In industry parlance, this is NTM ARR, or next twelve months annual recurring revenue. Sought-after later stage private companies raise capital somewhere between 10x-20x NTM ARR. That’s a broad range. Multiples vary with growth rate, capital efficiency, market size, demand, and other characteristics. It’s dynamic. In the private markets, multiples have been increasing during the last few quarters.

But what if we examined public companies in this way? By annualizing the most recent quarter of subscription revenue (i.e., multiply by four) we get estimated ARR. Then we can project next year’s ARR by using the company’s projected growth rate.

Amazingly, there are nine companies who are valued at greater than 10x NTM ARR. Atlassian, Veeva, Appian, ZScaler, Okta, Coupa, Xero, Alteryx, and ServiceNow. Atlassian and Veeva are valued at 16x NTM ARR. These multiples are similar to those in the private markets.

In retrospect, the normalization does make sense. What is the difference between a late stage private company and a new public company? Aside from compliance efforts, not much. They should be priced similarly, provided the metrics are similar. And that’s exactly what’s happened.

Why do I look at these multiples? I’m not a public markets investor. But these numbers impact the startup markets. Multiples influence acquisition prices and valuations in the private markets. When acquirers consider an acquisition, they evaluate a comparable company data set, also called a comp sheet. Inevitably, these sheets list enterprise value multiples. In addition, later stage investors model new investments based on public trading comparables.

Does this mean that we’re close to the top? We’re at or very near 10 year highs on enterprise multiples for software companies. The bull case: enterprises are moving to the cloud and shifting $1.5T of spend. All these companies will benefit. The bear case: valuations for these businesses assume long term continued success. Shakiness in future prospects of these companies could result in a correction.