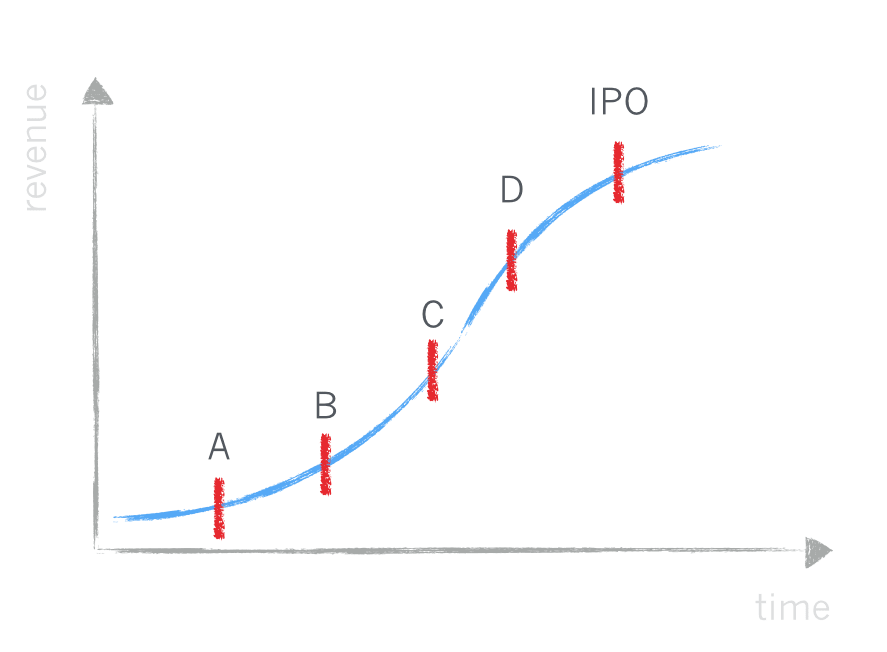 There’s a familiar path now to SaaS companies that start in the SMB (small-to-medium business) part of the market. Over time, they seem to inevitably begin serving larger customers. Box, Hubspot, Zendesk and among many others have exhibited this pattern. Why does this happen?

I believe we’re seeing Clay Christensen’s Innovator’s Dilemma at play. In short, new startups leverage a distribution advantage to acquire SMB customers at scale. These distribution advantages take many forms: a simpler product (Box vs Sharepoint); mobile app store distribution (Expensify vs Concur); content marketing (Zendesk vs Oracle/Peoplesoft). Early on, the SMB customers finance a startup’s growth and enable the startup to build a broader product over time that eventually becomes more attractive to enterprises. Because of the nature of SMBs, the startup must battle the higher churn rates of smaller customers which slow growth, creating the S curve above. At some point, the startup pursues the enterprise market to continue to achieve high growth rates with decreased customer churn.

Smaller customers churn at higher rates. Below, I’ve created a table that shows my general observations about customer account churn rates by segment.

SMB customers tend to go out of business more frequently than bigger businesses. They switch products more regularly because switching costs are low. They simply aren’t as reliable customers as bigger companies. So they churn, and churn inhibits a business’s growth, and demand the business invest more capital to continue growing at the same rates.

At some point, the total aggregate cost of the churn for an SMB business becomes so great that the company’s growth rate slows. It’s precisely then that a company should have an enterprise product in place. This is why the very largest enterprise software companies pursue the biggest customers; because they leverage the sales economies of larger accounts. Let’s contrast an inbound sales team at an SMB company and with an outbound sales team at an enterprise company where both companies spend the same per year in sales, about $0.75M.

Some startups pursue the enterprise part of the market immediately. But this often requires building a substantial feature set before the company can sell their product. Rather than invest several years to build an enterprise product broad enough to compete, many SaaS startups focus on the SMB part of the market. Small businesses have fewer demands and less sophisticated needs. Serving these customers finances the eventual development of an enterprise-grade product. The growth of the SMB customer base enables the company to grow revenues quickly and to raise its first few rounds of capital, and may even fuel it all the way through IPO.

As a startup’s revenue grows and its product broadens to appeal to enterprise customers, the company can afford to trade the sales velocity and predictability of selling into the SMB and mid-market for the leverage and scale the enterprise market offers. At this point, the startup cedes the SMB market, creating an opportunity for a new entrant. The Innovator’s Dilemma starts all over again, leading to a new cycle of innovation.

Note: I’m making a broad generalization in this post. Intuit and Xero are great counter-examples of companies who have become enormous businesses purely focused on the SMB. But they are very much exceptions.

In addition, as Kenny van Zant points out, there is a different class of company that uses the inside sales methods to target department level sales, rather than SMBs, in which case the sales efficiencies and churn rates described above, don’t apply. Examples of this model include SolarWinds, the place Kenny and his team pioneered the innovative high velocity inside sales model.