In the past 24 months, something extraordinary has happened. The value of publicly traded SaaS companies has grown by 200 to 400% while the underlying customer unit economics of those businesses hasn’t changed. 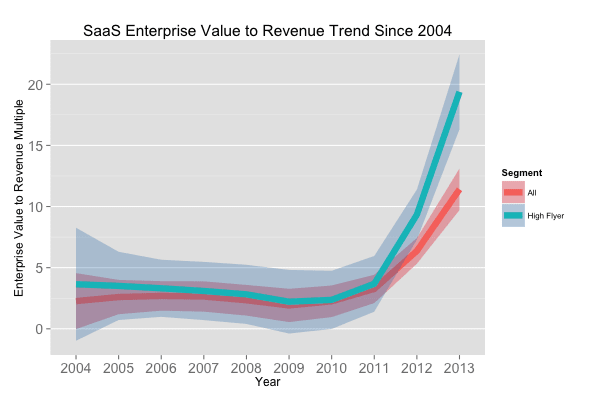 This dramatic acceleration has increased startup valuations in parallel. Twelve months ago, I saw most SaaS startups raising in the 5 to 10x this year’s revenue range. In the past few months, valuations have soared to nearly double those multiples higher for some exceptional startups. Investors, who have witnessed the public comparables double in value, are increasingly willing to move further out on the risk/reward curve.

How can this be? We know cost efficiencies are’t the driver behind these trends. SaaS companies haven’t been able to dramatically reduce their sales and marketing expense.

Revenue growth is the main driver. In the 2004 to 2009 period, average revenue growth for SaaS companies hovered around 25%. In 2010, SaaS companies as a whole began investing more to grow faster and in the past three years, average growth rates have risen to about 35%. But this came at the expense of reducing net income to revenue by about half. In other words, these business take 50% of their profits and reinvest in growth. 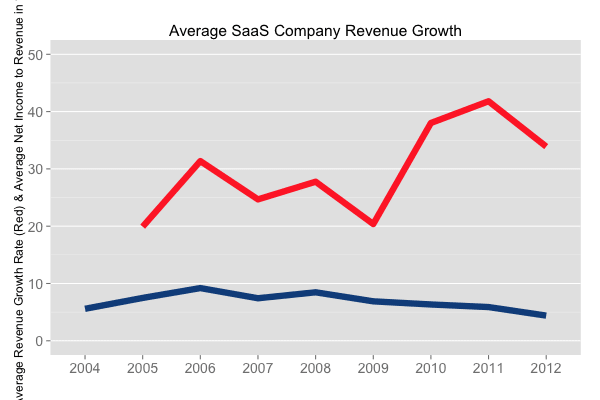 Ostensibly, the revenue growth figure is skewed by the surge in young SaaS IPOs which should grow faster than their older, more established brothers. But, that’s not quite true. 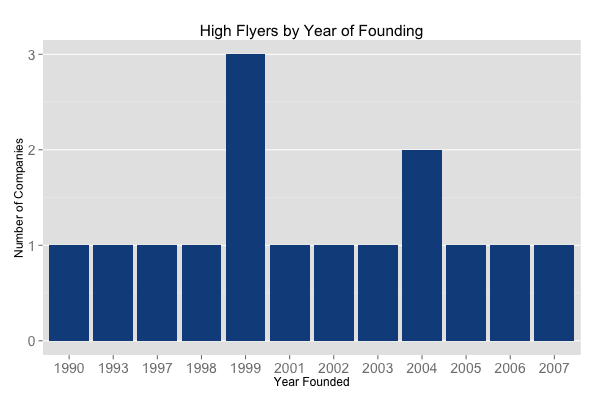 This bar chart shows the distribution of the top 50% of SaaS companies by EV/Rev multiple. The distribution is quite even. Older and younger companies are fetching these huge multiples indicating the valuation increase trend is broad.

There’s no question that SaaS has brought a revolution to users and administrators in terms of software ease of use, accessibility and management. Today, that value is handsomely and disproportionately rewarded in the public markets. But these trends have a way of reverting to the mean over time.