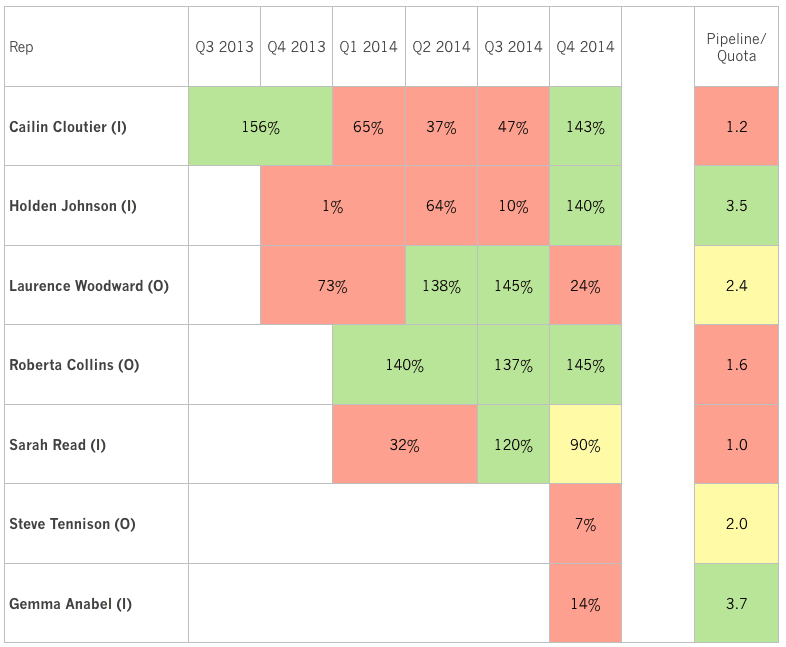 After a SaaS startup has achieved some degree of product market fit, the business will likely ramp the go-to-market teams, and in particular the sales team. Measuring and tracking the performance of a growing sales team is critical to the growth and financial health of a business.

The report above is the most effective view of the performance of a sales team I’ve found for SaaS startups. A VP of Sales at a Redpoint portfolio company introduced this report to me, and now I can’t live without it.

Let me quickly describe the report. On the left, the names of all the sales are listed in order of tenure. The letter after their name indicates inside sales (I) or outside sales (O) rep. The fiscal year quarter is listed across the top. The percentage within each cell conveys the fraction of quota achieved in that period. The last column contains the pipeline to quota ratio - the total qualified pipeline of the salesperson for the quarter divided by their quarterly quota.

Edward Tufte, master of information design, would be proud of this report because it conveys at least four different things about the health of a sales team succinctly.

Team Tenure
Second, the report conveys the state of the sales team. The startup has five ramped sales people and two new sales people one quarter into their two quarter ramp.

Past Team Performance
Third, the report displays the current and historical performance of the sales team across many different dimensions. The sales team in a worrisome state. Let’s walk through some analysis of individual rep performance:

Only two reps exceeded their quota during their two quarter ramp (Cailin and Roberta). Most of the others missed quota substantially, which raises the question: is sales on-boarding and training effective?

Only one rep, Roberta, consistently beats quota. Sarah looks like she might be a strong performer. The jury is still out on Holden and Laurence and Sarah. It’s not clear how deep the sales bench is and how much hiring/firing the company will need to do in the next six months.

Q4 2014 was a good quarter for most ramped salespeople. Why? Did the company run a sales promotion? Or did a new feature launch?

Finally, three of five reps exceeded quota last quarter, which is average. Most sales teams see about 60% of their reps achieving or exceeding quota.

Next Quarter’s Numbers
Fourth, the Pipeline/Quota ratio provides some insight into whether the company will achieve its plan next quarter. Ideally, we would see greater than 3x coverage for all the teams. Cailin blew out Q4, but Q1 doesn’t look very promising for her because she closed all her good leads in Q4 and her pipeline is thin. Same for Roberta. Holden looks to book another good quarter. But on the whole, the sales team pipelines aren’t as healthy as the company might hope, which means Q1 2015 bookings will probably be lower than planned.

This presentation of sales team performance is the most effective I’ve seen. In a single chart, a management team and a board can perform first-pass evaluations of the sales hiring and on-boarding processes, the depth of the sales team, the consistency of performance and the probability of the company achieving its plan next quarter.