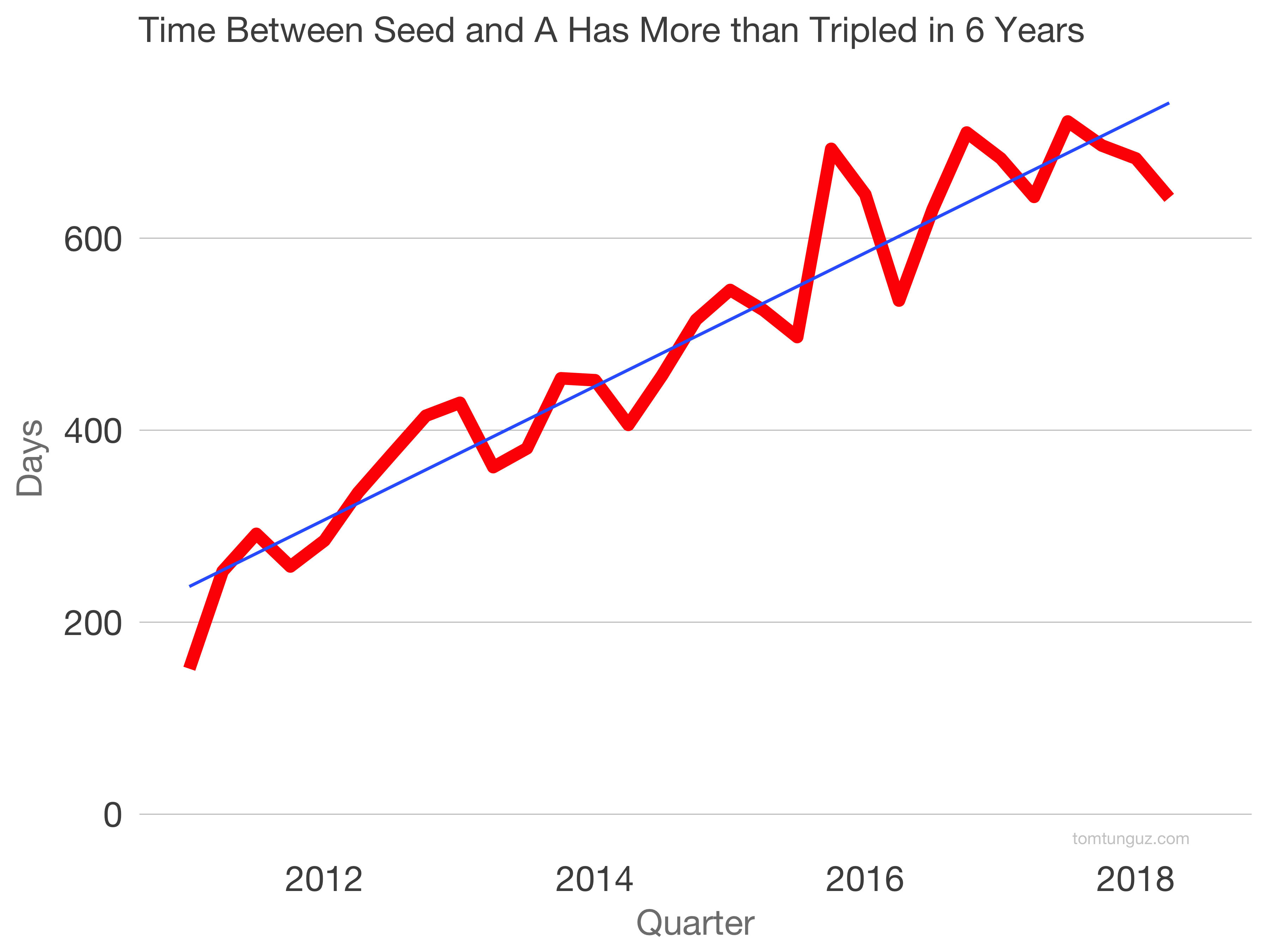 In the last six years, the median time between seed and Series A has more than tripled from about 200 days to about 750 days. Why? The seed market is in the midst of some secular changes. Seed rounds have declined 63% from their peak. Total dollars invested have fallen by 37%. But the median round size is up 3x in the same time period. In other words, investors are concentrating capital in fewer startups. 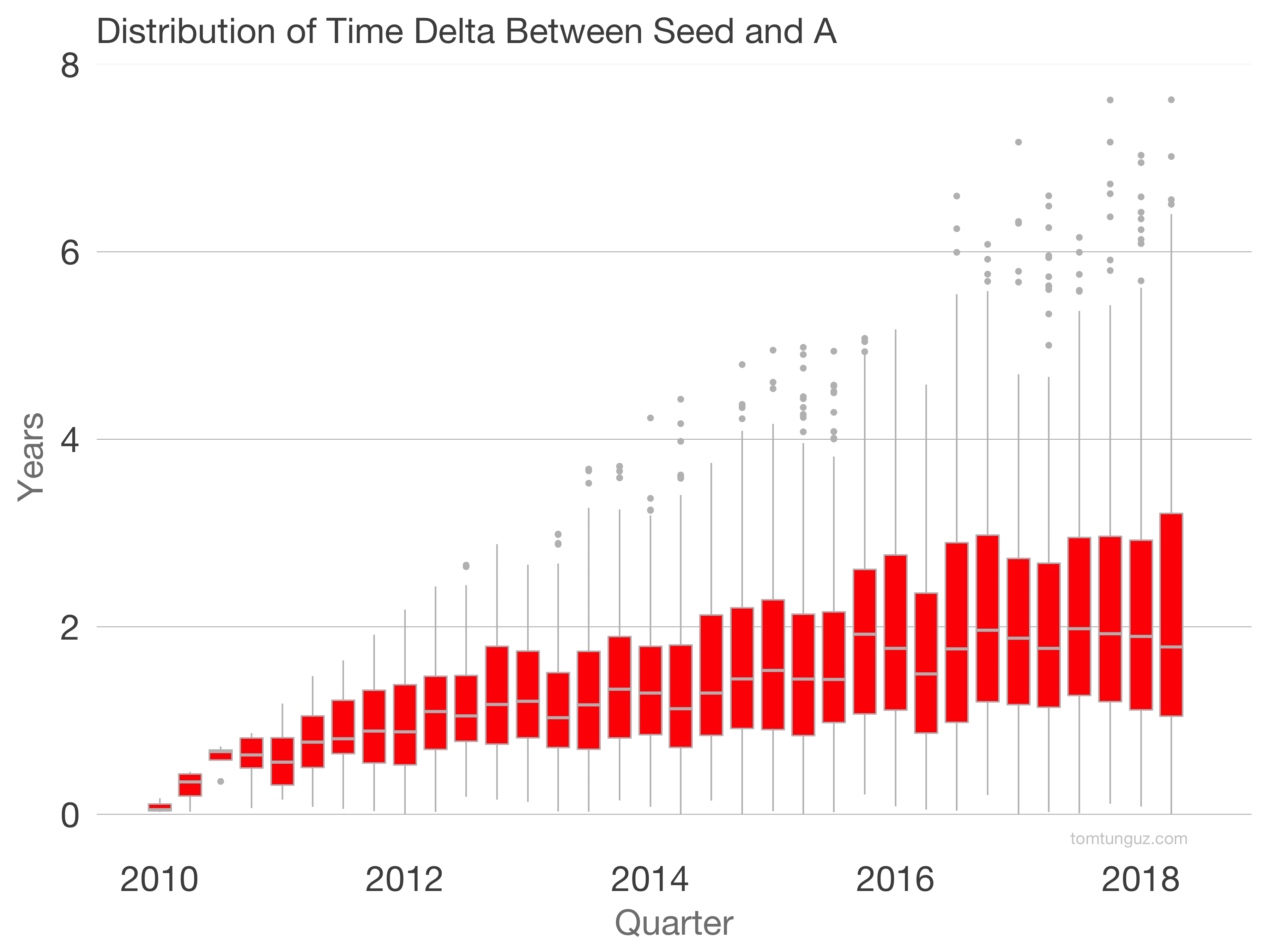 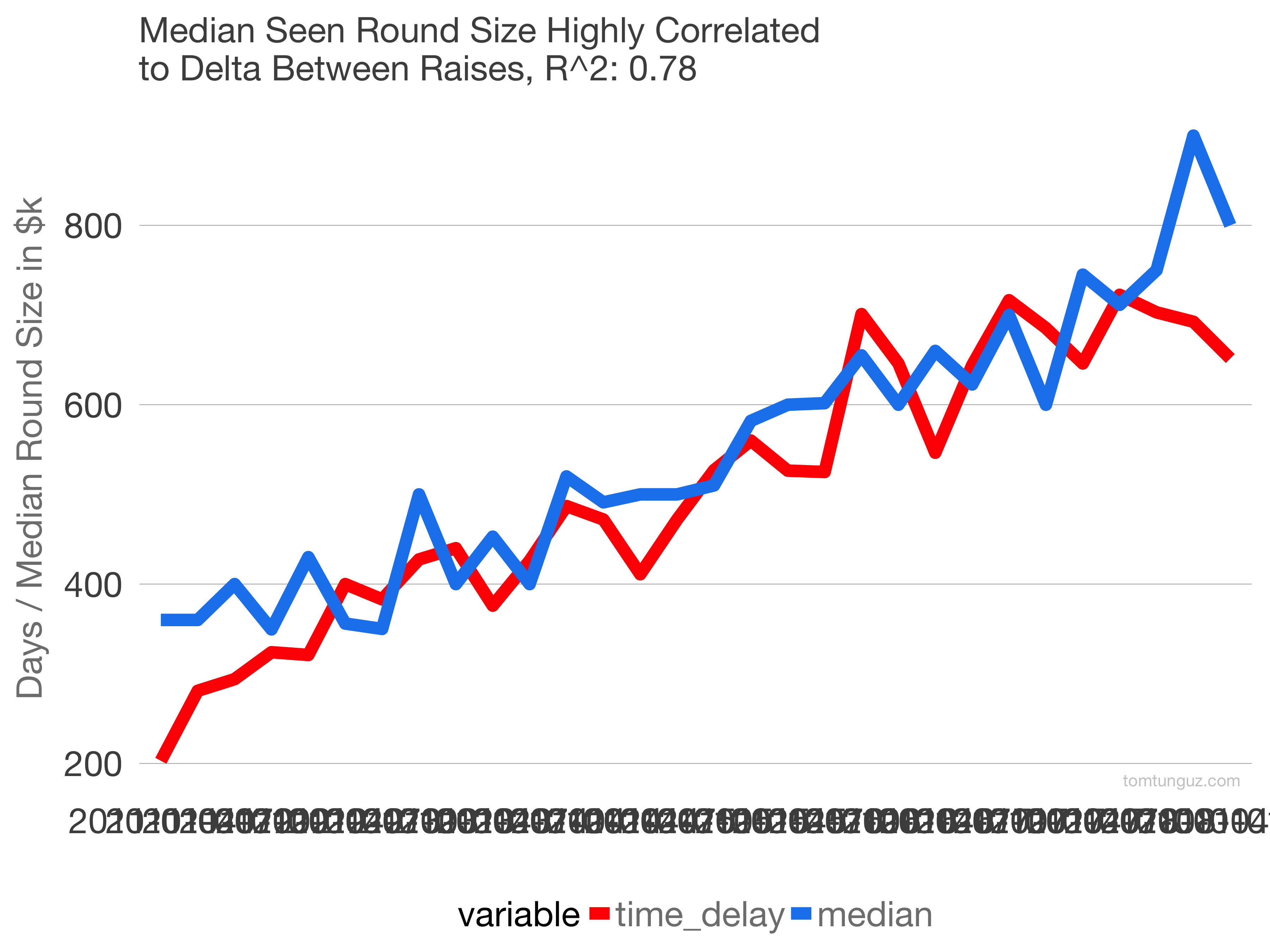 The increase in seed round sizes explains about 80% of the lengthening time between seed and Series A (R^2 is 0.78). 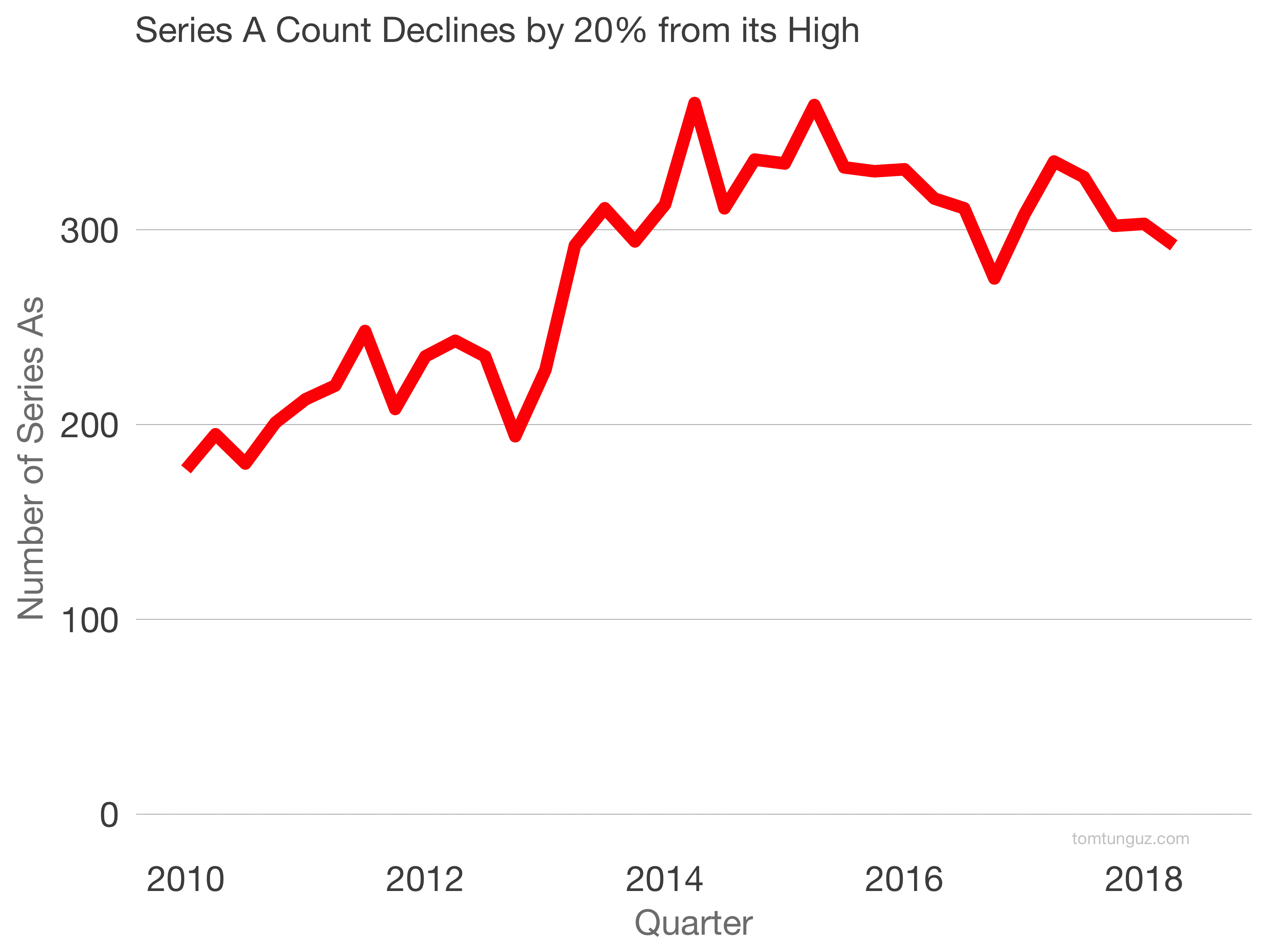 In the meantime, the number of series As has only declined 20% from its high, remaining relatively stable from 2014 through 2018. This means that the odds of a seed stage company raising a Series A have improved markedly in the last year. 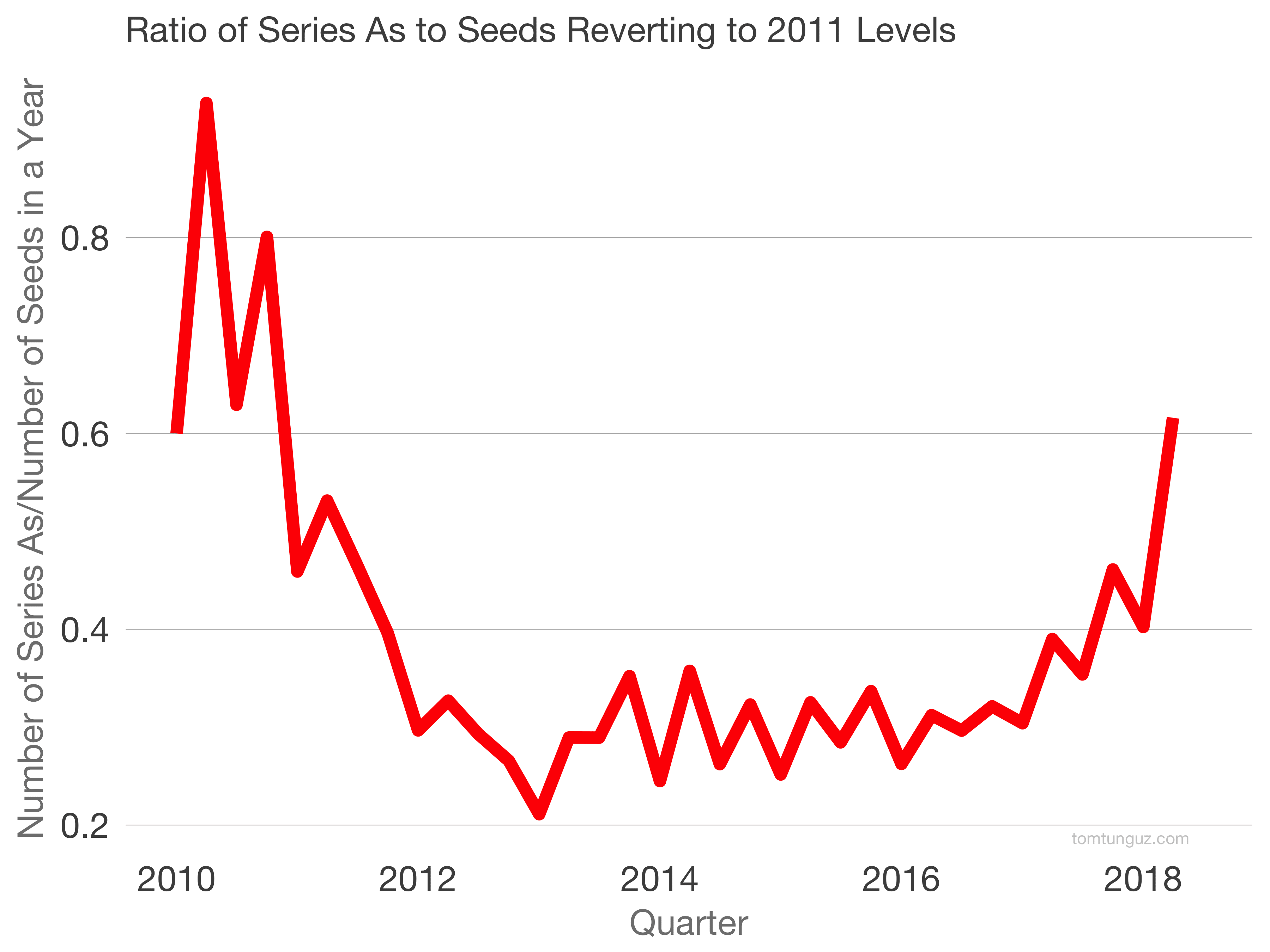 Startups benefit from the incredibly supportive financial environment. This is resulting in several different and important trends. Startups can invest in deep technology by building machine learning software that might take a year or two to bring to the market. Or startups might commercialize hardware, another category where time-to-market is slower than classic SaaS. Last, startups can benefit from a longer period to experiment, and find true product market fit.

The ostensible corollary to this is that series A investors expect more at the series A than they would have in the past, because startups have more time and cash. But that’s not reflected in my data. The average Series A company I’ve met in the last 12 or so months generates $732k in ARR, or about $61k in MRR, far from the $1M+ ARR quoted by most founders as their target.

In other words, round sizes have increased and though some startups may make more progress or invest in deep technology to create a moat, the prevailing dynamic in the fundraising market is an overwhelmingly supportive fundraising environment, aka an oversupply of capital. That oversupply has convinced some investors to reduce their exposure or pull out of the market almost altogether. For now, though, the Series A market is the strongest its been since 2010.

What I'm Grateful For