The Series A Is Overloaded

Overloading means using the same code for two very different purposes depending on inputs. For example, a programmer could redefine the + function so that instead of adding two numbers, the function would multiply the numbers if one of the numbers was negative. Overloading can create lots of confusion in programming because the same function name can return very different results.

The Series A market is overloaded. In my book, a Series A is the first round of financing with any single investor committing more than a $1M, typically led by an institutional investor.

But everyone has a different definition. A company may define a Series A any way they like or even give it a different name: I’ve seen Series 1 or even Series Cool. But I digress.

In the market today, three different types of Series A exist: the classic, the juiced and the jumbo.

The Classic Series A is your father’s $3 to $5M round. The typical company has 3 to 7 employees, a product early in market with some data to support product market fit.

The Juiced Series A ranges from $8 to $15M. Startups raising juiced Series As often have raised sizable seeds of $1.5M+, have teams approaching 20 people and have generated substantial market feedback. The check sizes resemble traditional Series B investments.

The Jumbo Series A weighs in at $15 to $60M. Jumbo Series A startups tend to have been bootstrapped for quite a long time. The business is often well into revenue, roughly speaking about $10M+, and is raising its first institutional capital to grow faster and bolster the balance sheet before an IPO.

Given the recent rise of the latter two species of Series A, one might be tempted to believe these rounds skew the financing market. Despite the substantially larger investment sizes, the NVCA data shows the average Series A investment hasn’t changed substantially since the end of the dot-com era at roughly $5M. 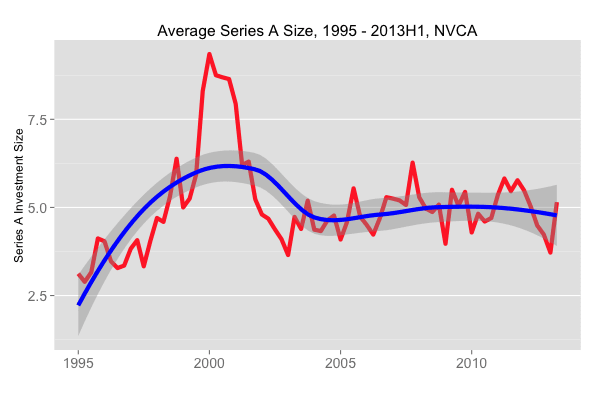