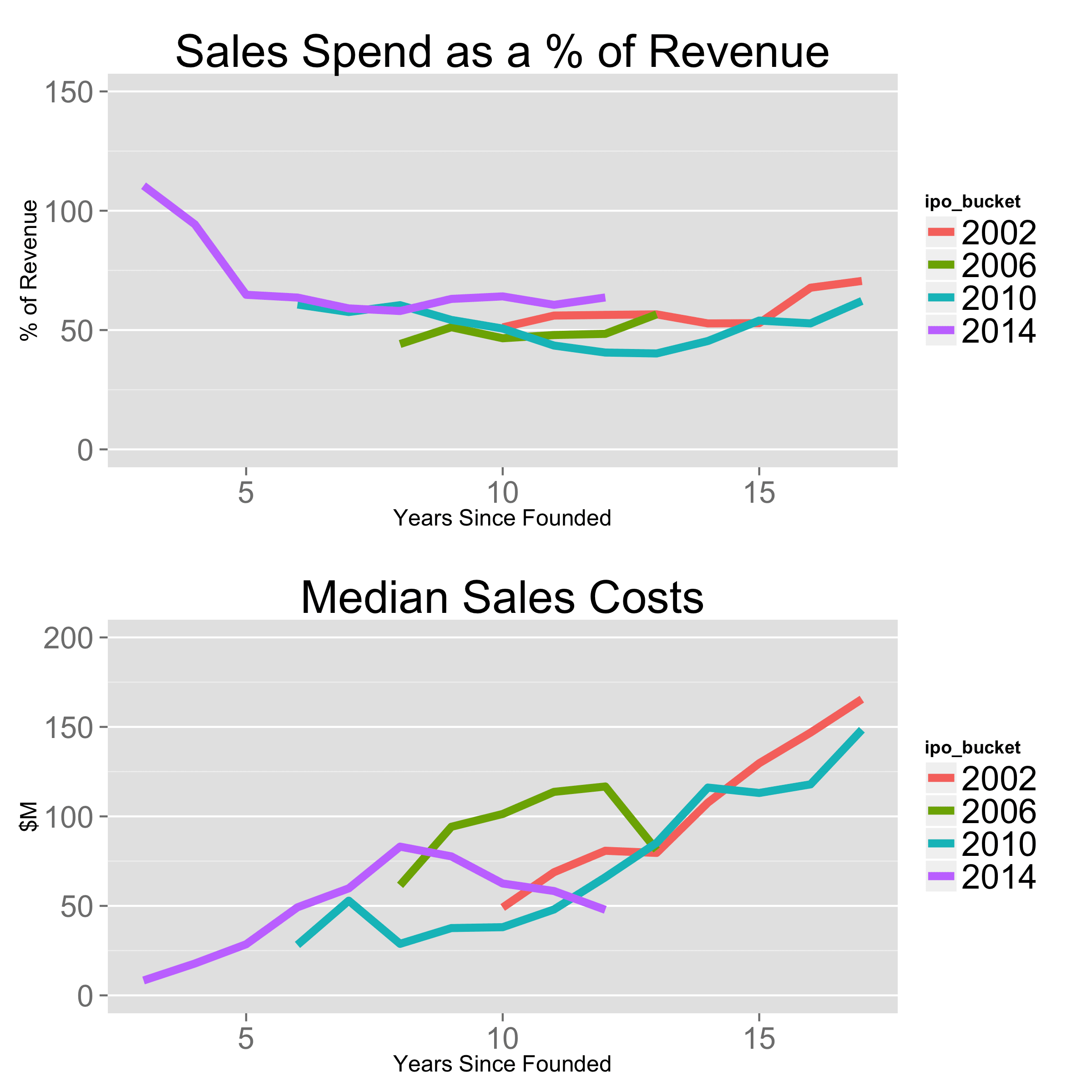 In fact, the 2014 cohort of public SaaS companies spend more on sales & marketing and engineering than previous IPO cohorts. But this increased spend results in faster revenue growth and consequent higher revenue.

I’ve prepared three charts and one table to compare the sales and engineering spending across different cohorts of companies over time, and the resultant effect on revenue growth. The chart above, Sales Spend as a % of Revenue and Median Sales Costs depicts the percent of revenue allocated to sales and marketing over the life of the company, by IPO cohort. Because startups are going public earlier and therefore release information about the earlier years of the company, we have more data on the newer cohorts. While we can’t make comparisons about the early years of startup sales spend across cohorts, it’s plain to see that across the past 4 IPO cohorts, sales spending eventually converges to about 50%. There’s no clear difference, then, in sales spending.

Looking at the Median Sales Costs, which shows gross sales dollars in $M, the 2014 cohort does show accelerated spending compared to older cohorts. In combination with the chart above, these data points imply that greater sales investments generate more revenue than in the past. 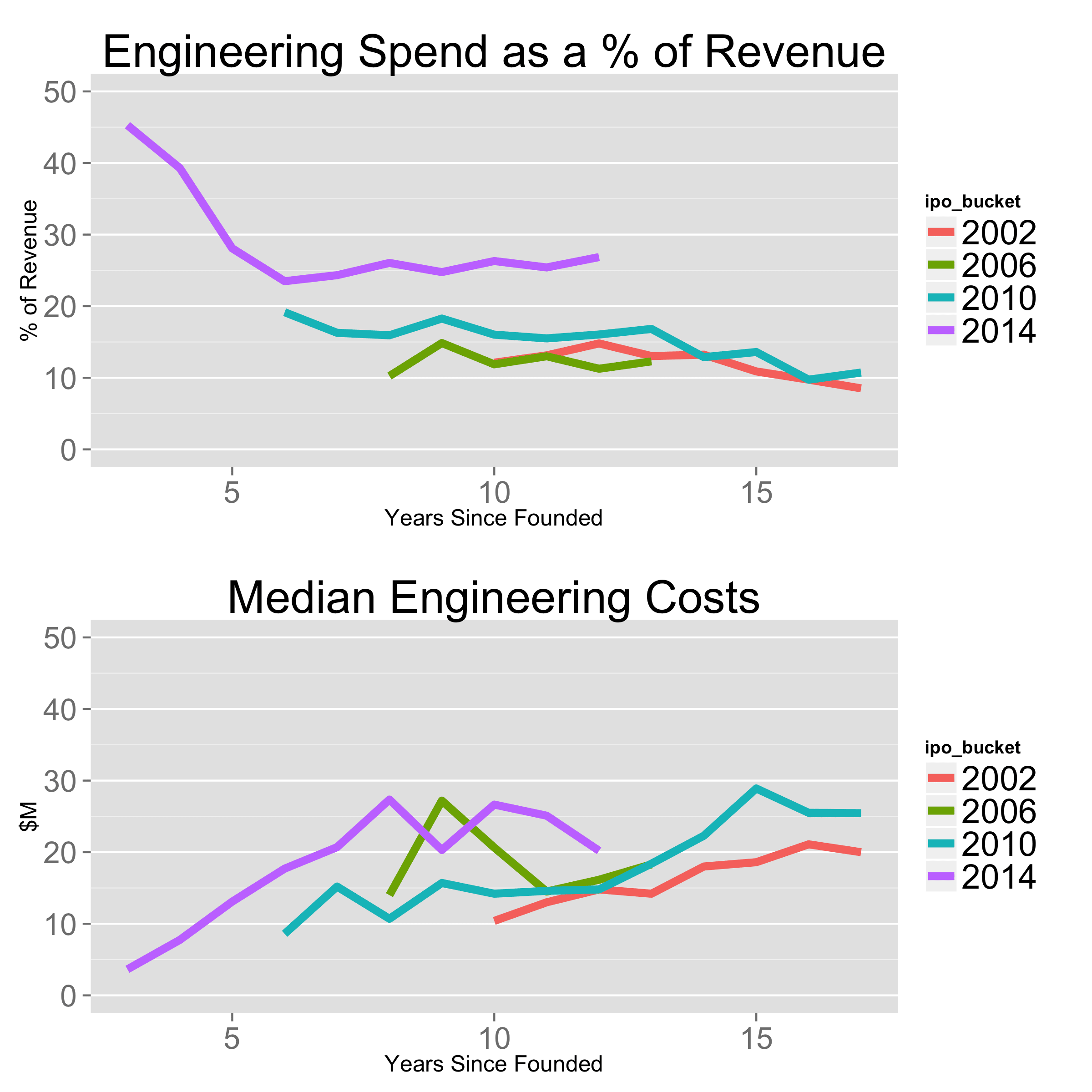 The engineering spend story is similar, but greater in magnitude. Newer companies have invested substantially more in engineering as a percentage of their revenue than their older counterparts. This may be because larger round sizes enable the creation of larger engineering teams earlier. It may also be because the pace of innovation has increased and fending off competitors means persistently building more products. I’m not sure, but the trend is real on a percentage basis as well as on a dollars basis.

Summing up these two charts, the 2014 cohorts do in fact spend more on sales and marketing than their predecessors, and earlier on in their lives. This increased spending is enabled by larger raises earlier in the company lifecycle and actually leads to faster revenue growth, as the graph below proves. The 2014 cohort has the steepest, most consistent growth curve of any of the cohorts. 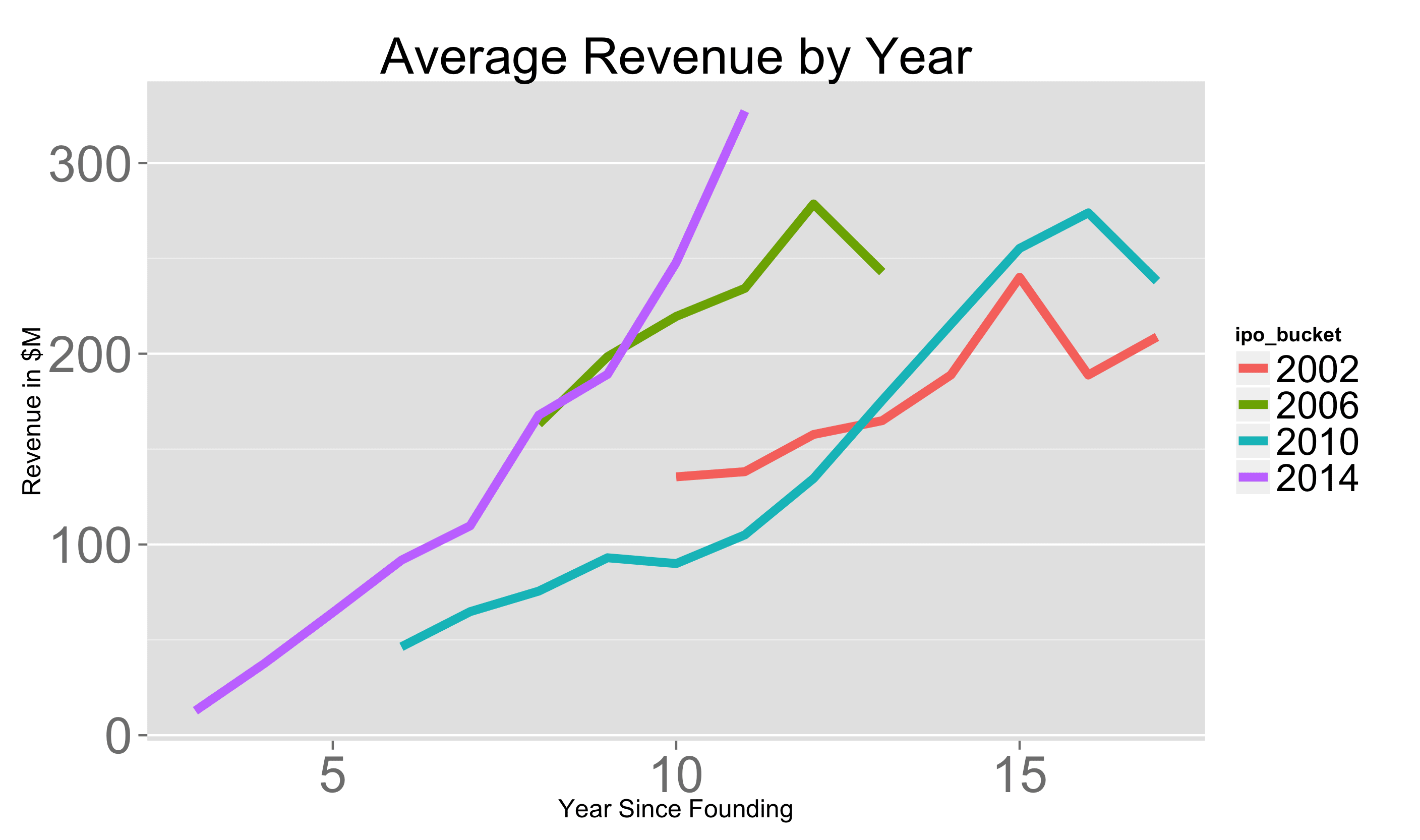 Leading the way, a handful of outliers are adopting increasingly efficient models. Below is a table of the most efficient companies by cohort, showing their sales and engineering spend. There seems to be a bumpy, but persistent decline.


The table does show the most efficient company in the 2014 cohort to have spent less on sales than any other IPO cohort winner. But in the 2006 cohort, DealerTrack spent only 4% on engineering investment, besting the 2014 engineering winner, Fleetmatics.

In summary, the data shows that newer SaaS companies spend more on engineering and sales & marketing than ever before but that increasing efficiency in the sales models can justify that investment with faster revenue growth. The data don’t show us why the increases in spending in sales and engineering result in more revenue, but they do suggest that cost per sales is decreasing either because of decreased costs of customer acquisition or increased average contract value or some other reason. In any case, the result is quite encouraging.

The Correction in SaaS Company Valuations