The 3 Different Strategies of Venture Funds

As I wrote about in a post on aligning founder and VC incentives, it’s important for entrepreneurs to understand their own ambitions and the ambitions of investors. The most important part of that is understanding the financial motivations and the dynamics of the industry VCs face.

Typically, VCs adopt primarily one of three strategies with a fund [1]:

Below is the chart showing the number of private technology company acquisitions of various sizes ranging from $0 to $1.2B. As you might expect, 53% of acquisitions by number are sub-$50M and the $1B+ transactions generate 19% of the proceeds.

Another Perspective on the Data: Quartiles

But let’s look at the estimated proceeds in another way, by quartile. Each of the four outcome buckets below generated the same amount of return to investors[5], about $11B in 2012. Obviously, the left-most bucket requires many more acquisitions than the right-most bucket to achieve the same result, but there are twenty-one times fewer $1B exits than sub-$50M exits so the odds of investing in those billion dollar winners are much slimmer. Pick your poison. 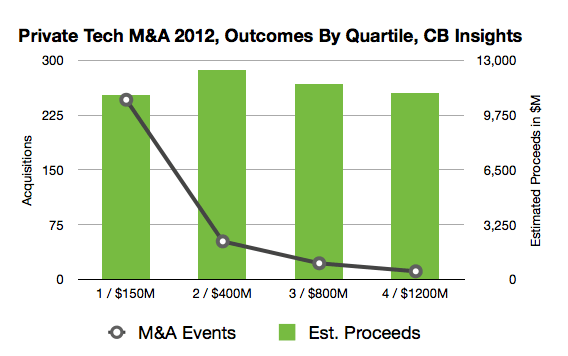 Matching a Fund to a Quartile

In summary, small funds tend to make many bets and aim for high success rates. Medium funds are able to accept close to half of the failure rate of a pure strategy small fund while the hypothetical growth fund takes a smaller amount of risk.

The Relationship Between Risk and Ownership Targets

Not coincidentally, the ownership percentages typical are inversely proportional to risk tolerance. The greater the acceptable failure rate, the more important ownership becomes, because the winners must cover a fund’s losses.

There are many different ways of constructing a fund’s strategy and those strategies vary with the risk tolerances of the individuals raising the fund, innovation cycles and financial market cycles. But at the core of the venture business are these three fundamental investment strategies.

The data I use here are all estimates because I don’t have access to CBInsights source data.

I removed the Facebook IPO from calculations because of its disproportionate and skewing effect on the data.

[1] VCs often blend these strategies in portfolio construction. Every investor aspires to a $1B+ exit. But, to simplify the analysis, I’m assuming funds pursue only a single strategy. And of course no investor has perfect knowledge of the ultimate acquisition price of a business, but instead uses market size, public company multiples and other data to form a proxied estimate for that value.

[4] My calculations based on estimates of CBInsights Data

[5] Gross returns will be the same, but cash on cash investment multiples will vary.

Community Marketing&#58; Starting A Movement For Your Product