Fred Wilson’s perspectives on trends in consumer web investment created a big brouhaha over the weekend. Commenting on a WSJ article, Wilson offered his confirmatory observations that follow-on investments in the consumer web have become more challenging as momentum investors have shifted toward enterprise.

Over the past 18 months, valuations of later stage consumer internet companies have ballooned into the hundreds of millions propelled by enormous user growth. For many of these startups, revenue hasn’t been able to keep pace with rising serving costs. It’s not surprising that some members of the eight figure valuation club can’t raise follow-on rounds at even greater premiums - the economics can be challenging. It took YouTube something like seven years to break-even.

But is this the story for all consumer web? Is the drought of consumer investment capital experienced by the internet monoliths common to earlier startups? What fraction of investment dollars have moved to enterprise?

I’ve aggregated data from the NVCA from 1995 to Q3 2012 to answer these questions in two charts.

Consumer web’s share of all US VC investment is increasing

Historically, enterprise investments have been the bread and butter of venture firms, representing about 52% of dollars invested over the last 17 years. So a focus on enterprise isn’t new. Instead, the rise of consumer deals is the trend. 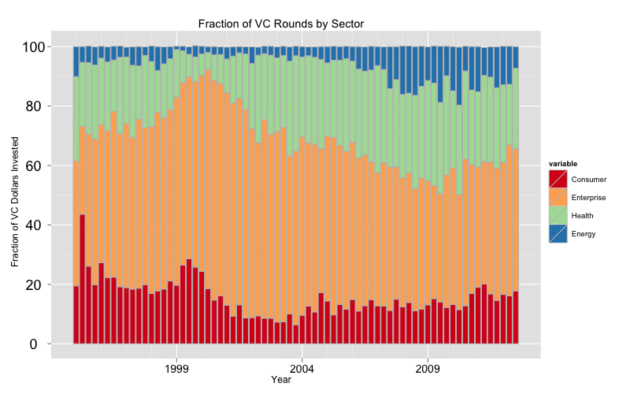 And across all major sectors of VC investment (consumer, enterprise, healthcare and energy), consumer investments are growing their share. Since 1995, consumer deals have on median commanded 14.7% of VC dollars. Through Q3 2012, that share has grown to 16.8%, indicating the consumer venture market is growing or stable.

In 2004, for every 1 consumer investment, VCs invested in 10 enterprise companies. Today that ratio is 1:3.

Consumers share growth is also evident when compared just to enterprise investments. After the bubble burst, enterprise deals outnumbered consumer deals 9 to 1. Since the bottom in 2003-2004, consumer deals have increased their share of venture dollars growing by 250% to about 25%. ![image](https://res.cloudinary.com/dzawgnnlr/image/upload/q_auto/f_auto/w_auto/image_195_833869424)

Despite these shifts in share and market volatility, there hasn’t been a statistically significant difference in the number of investments or dollars invested comparing 2012 investment activity to the past 17 years.

The party is just getting started

Despite the sentiment expressed by Fred and the WSJ about the challenging situation of consumer internet follow-on investments for high-fliers, the rest of the consumer web startup scene seems to be thriving.