UIPath offers software to build robots, programs that automate repetitive work. Some examples include streamlining customer onboarding. Robots read pdfs that customers provide and input that data into other computer systems. Customer support teams might use RPA robots to read the contents of an email, find an order number, look up the order, and present the support agent with some key data.

The UIPath suite includes the software to write, execute, monitor, and maintain these robots. 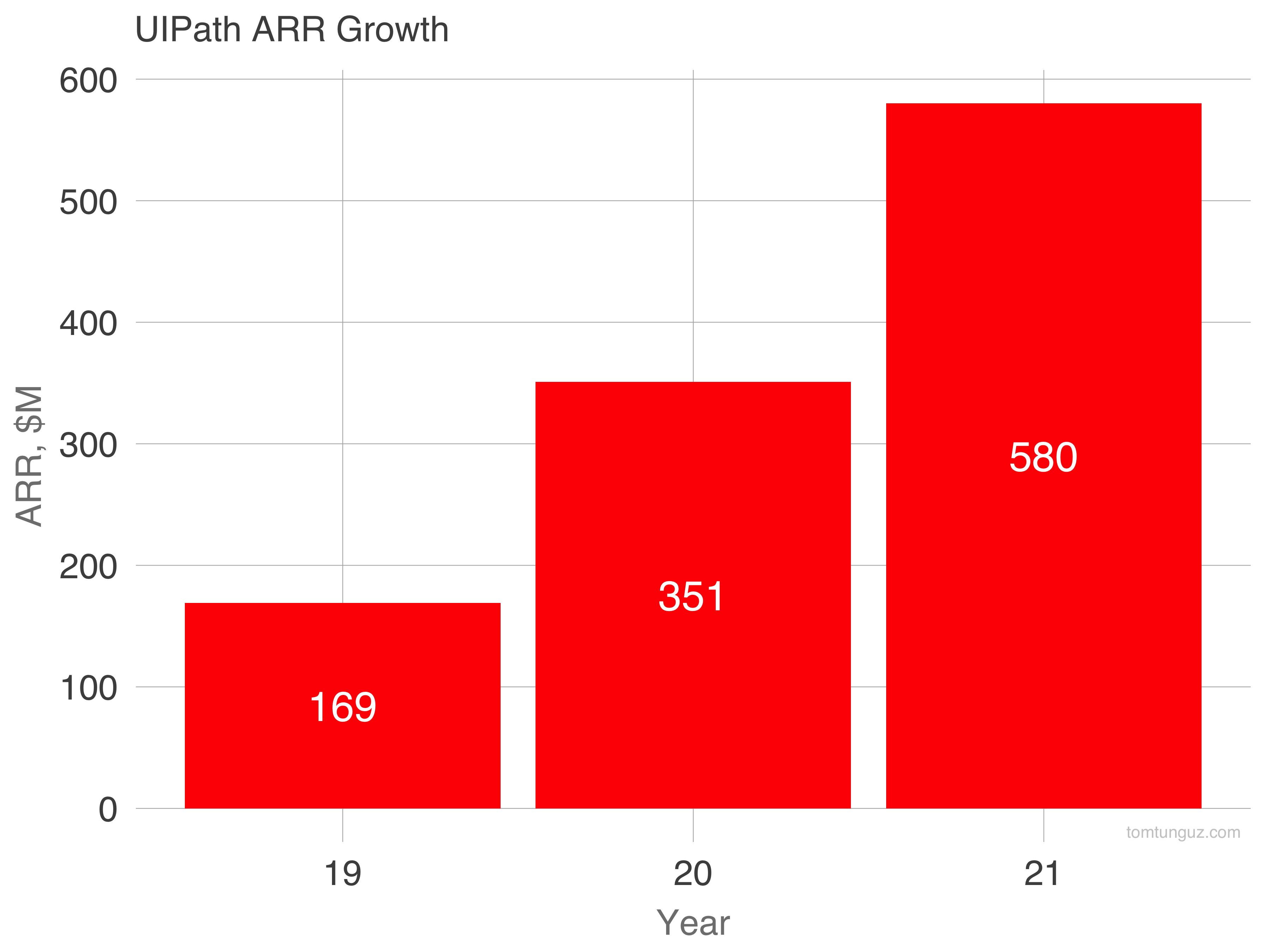 In the last three years, UIPath has grown ARR from $169m to $580m, a CAGR of 151%. Though it may seem that the growth was simply executing a constant gameplan, the underlying data suggests a significant shift in strategy. 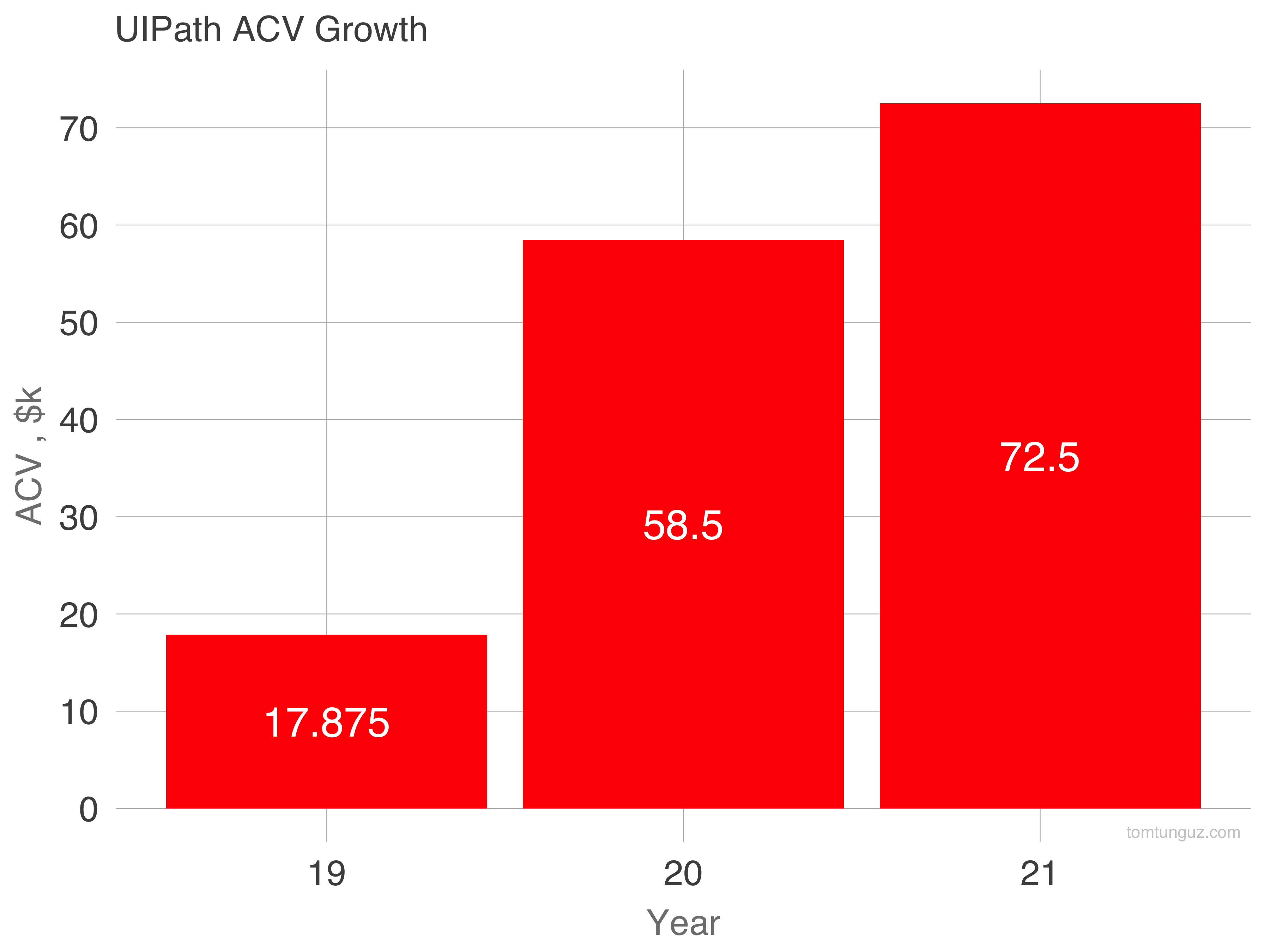 Why is this? My supposition is that robots improve efficiency by some percentage, let’s hazard 5-30%. Those efficiency gains don’t mean much for a company of generating $1m in ARR, but they are massive savings for companies operating call centers costing billions annually; a 5% improvement in a $2b support operation is $100m in savings accreting immediately as profits.

Concurrent with the evolution in ACV, we can observe a few other trends. 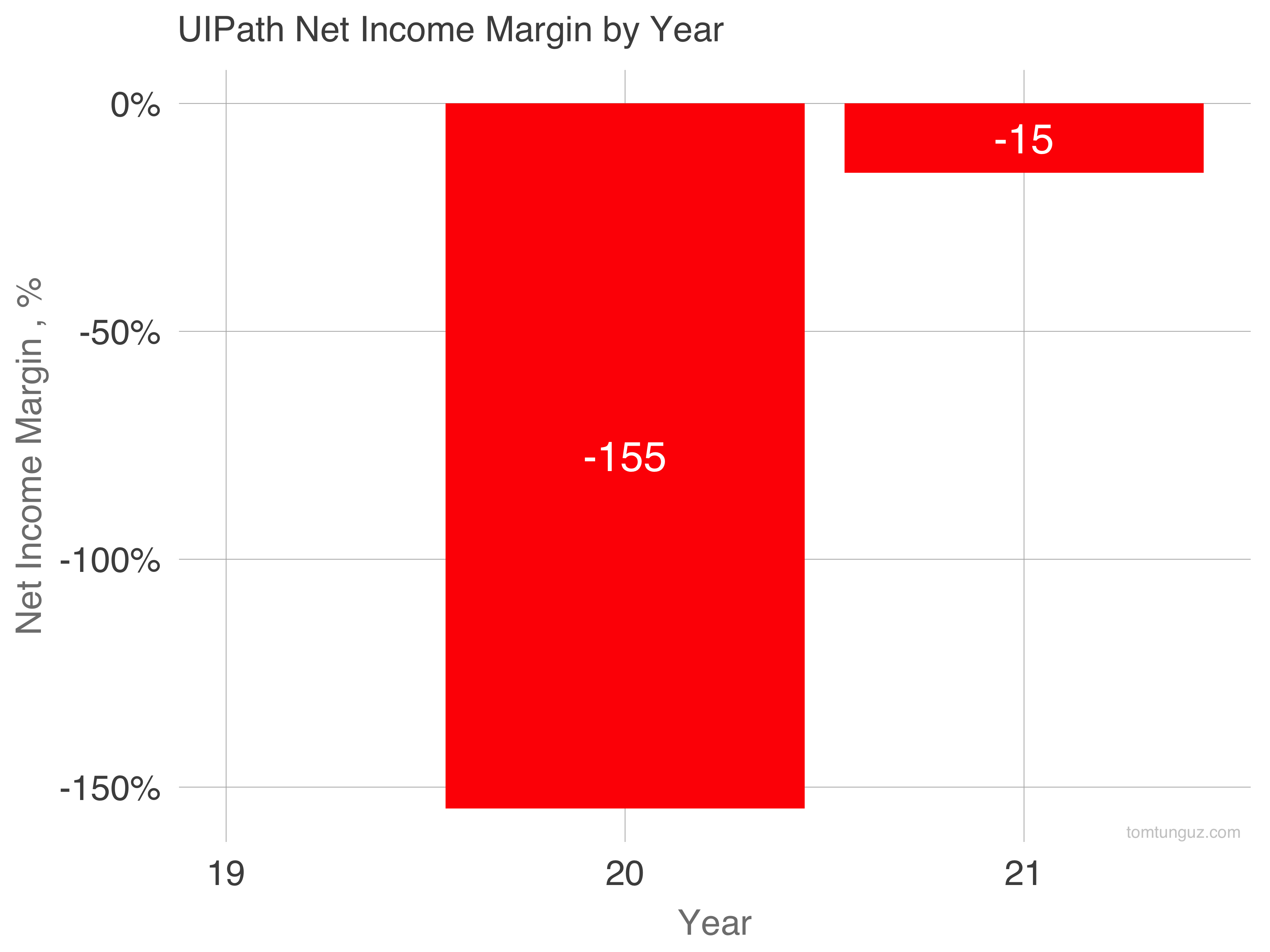 First, the company trimmed a -155% net income margin to -15%, a brobdingnagian (aka massive) improvement. 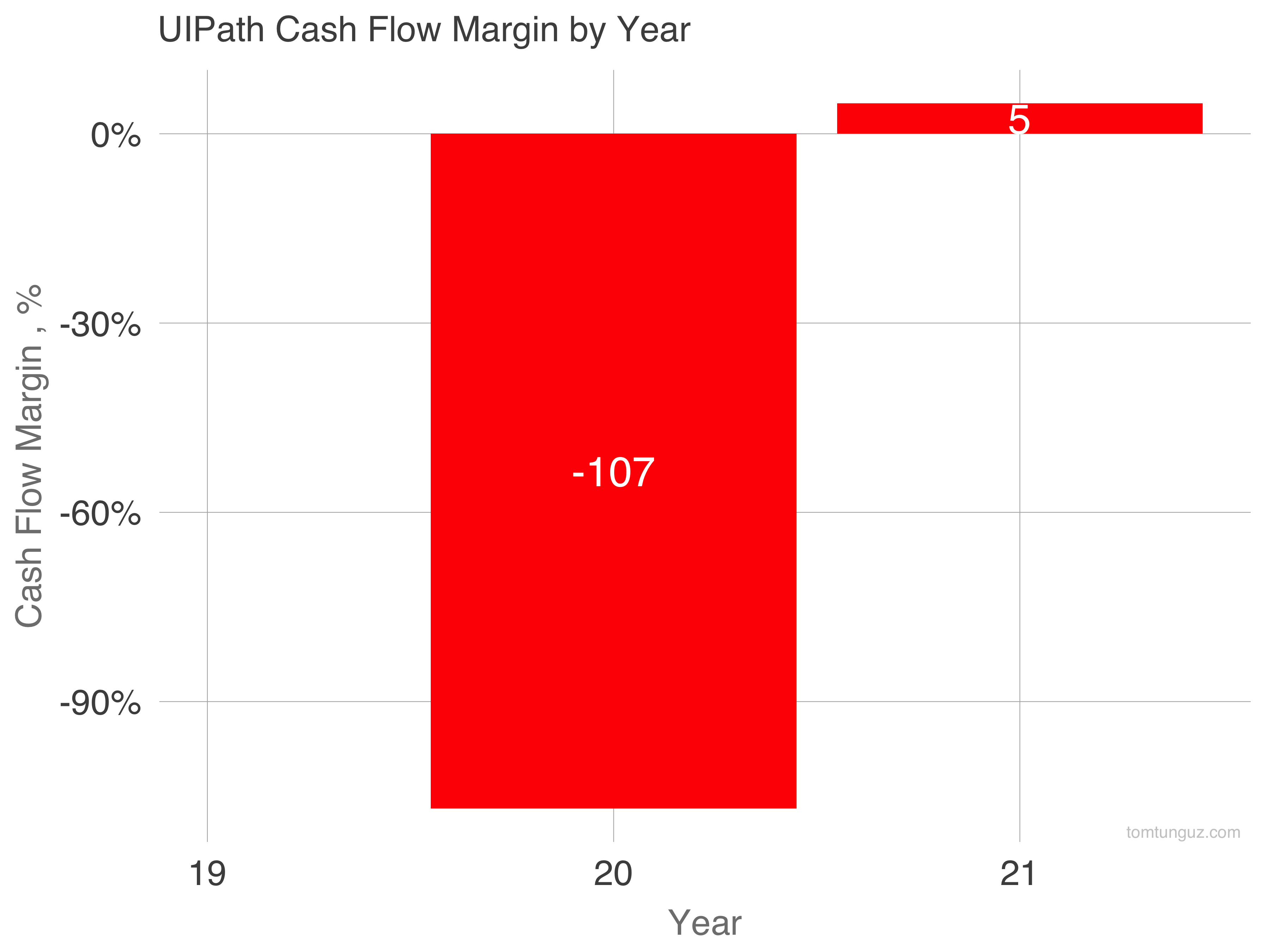 Improving the net income margin and the cash flow margin this quickly for a business of this scale is like ungrounding a large container ship from an Egyptian canal - no easy feat. 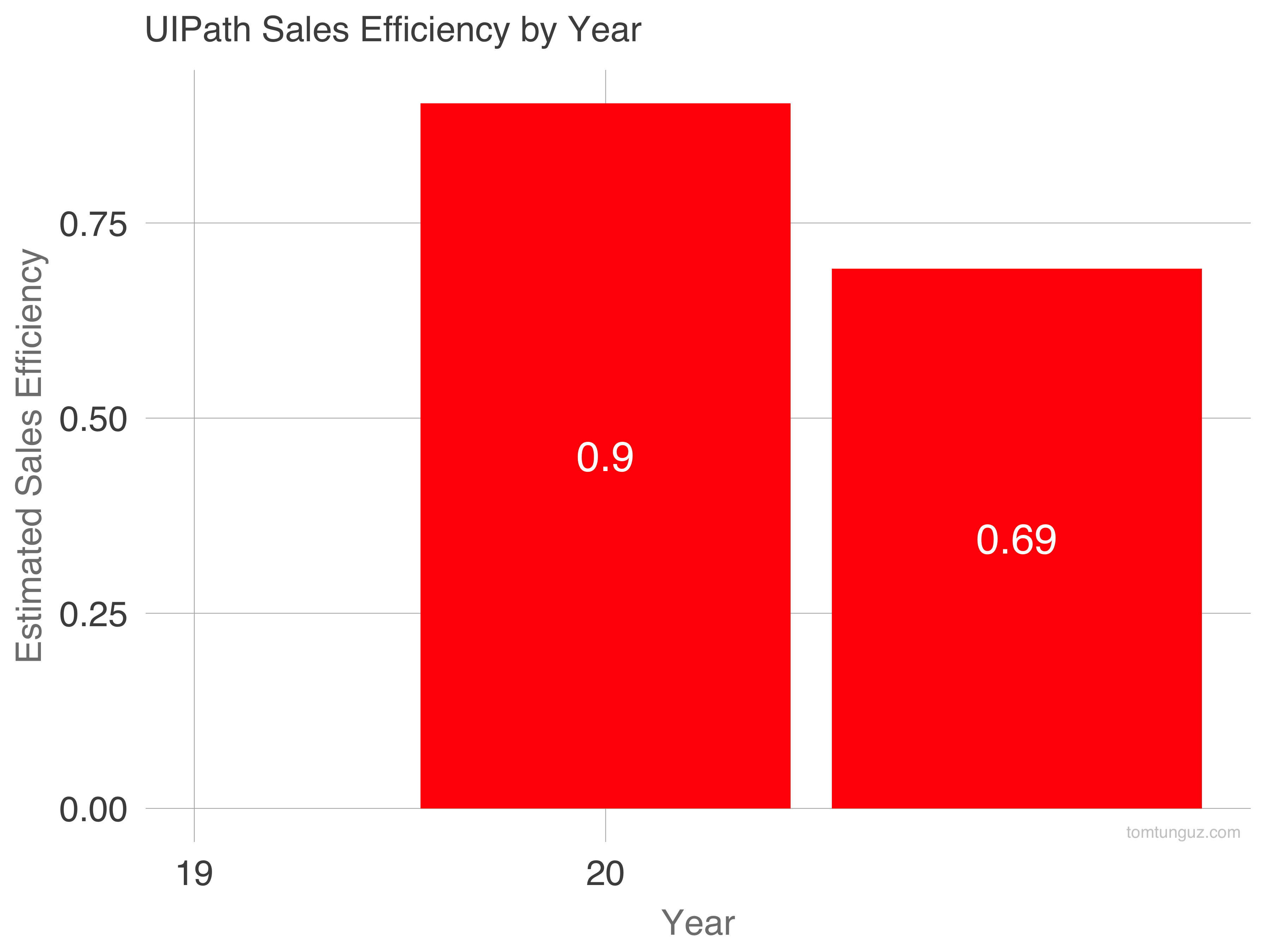 Throughout this transition upmarket, the company has sustained a strong sales efficiency number with an implied payback period of about 17-18 months. 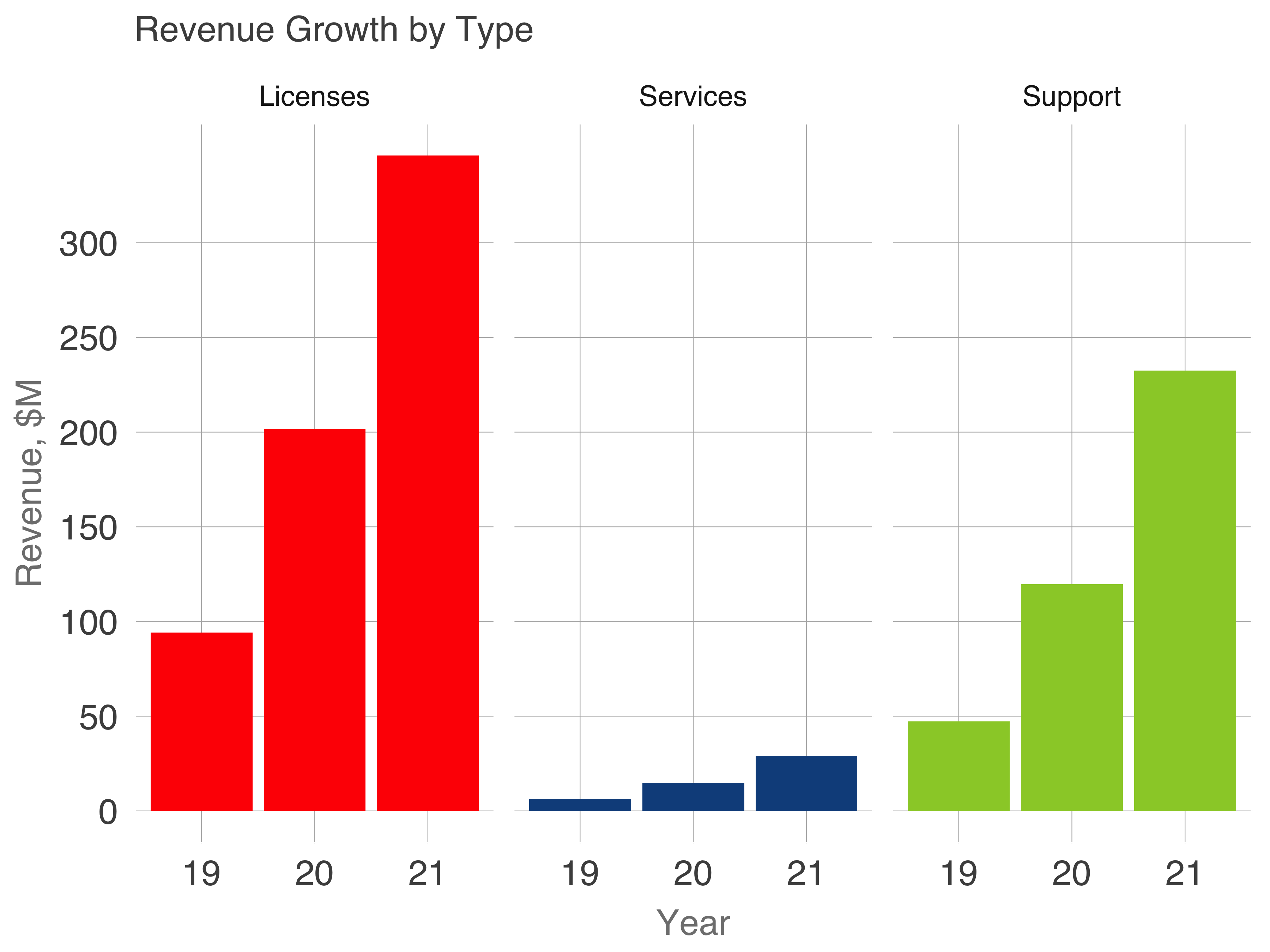 Licenses constitute the majority of the revenue, followed closely by Support, with services comprising less than 5% of revenues. The ratio of support & maintenance to license revenue has increased from 50% to 67% over this three year time period.

One hypothesis for this trend is that customers initially bought a large number of licenses and are now working with UIPath and the 3100 system integrators in their network to build a larger number of robots per license seat. It’s consistent with the previous data that the business is moving upmarket and cross-selling more frequently. 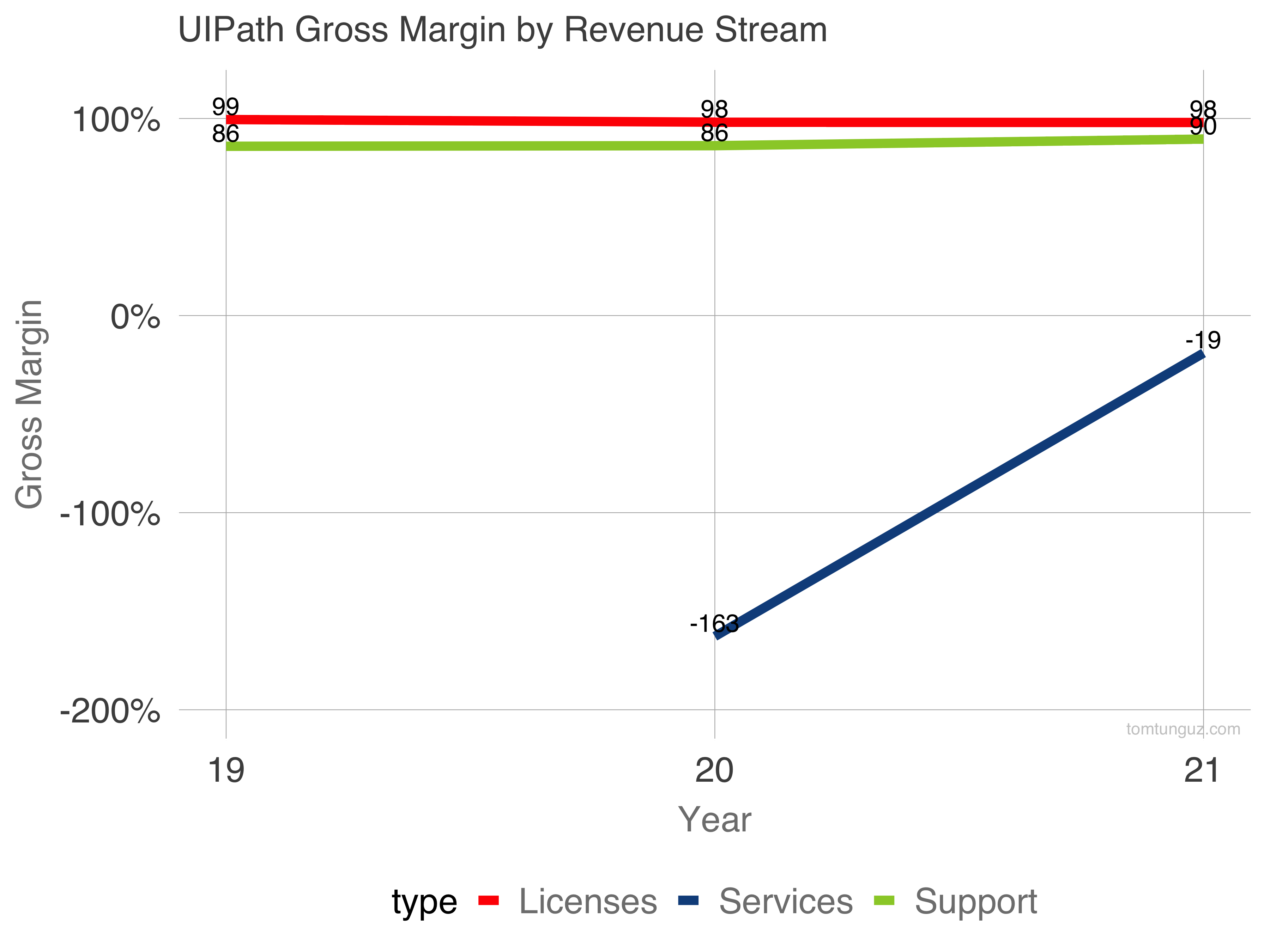 Impressively the gross margins for the two main revenue streams are stellar. Licenses revenue is 98% gross margin because the product runs on customers’ computers. Without infrastructure costs, the cost to produce the product is zero. Support and maintenance operates at 90% gross margin, nearly 20 percentage points above the public median of 71%. So investors should be indifferent to the revenue mix when considering gross profit.

The services gross margin is -19%. But at less than 5% of overall revenues, it’s barely worth mentioning.

UIPath’s metrics rank it as one of the fastest growing and capital efficient businesses today. The transition apparent in the metrics must have been a tremendous effort internally, but the dividends are plain to see in the S-1 and even more so when the company begins trading.

Congratulations to the team at UIPath on building a world-class company.