Valuations in the Series A and Series B Market are Booming

With a litany of articles in recent months highlighting the number of companies with valuations greater than $1B, I’ve started to wonder about the valuation trends for the highest profile venture backed companies.

Venture capitalists are increasing market prices in Series A and Series B rounds aggressively in effort to reap disproportionate returns. And the variances in the prices of different startups in these early rounds is enormous, indicating a relatively inelastic market. Investors are chasing fast-growth startups irrespective of the price.

I gathered data on 77 rounds in the last 18 months by “high flying” companies using my own admittedly biased definition. Below is a table of the median, average and standard deviation of those Series A, B and C rounds.

I’ve also plotted the distributions below. Click to see a bigger image: 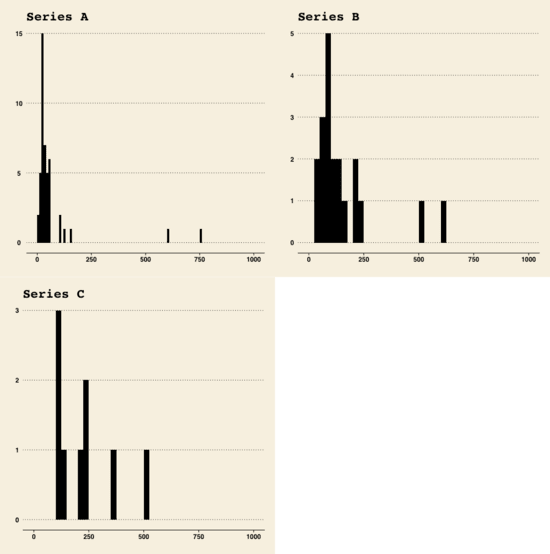 The Factors Behind the Trends

Returns in venture capital follow a power law - the top 1% of companies return the lion’s share of capital. As a result, venture capital demand to invest in high fliers is inelastic. Look at those standard deviations. They are massive!

Venture capitalists have raised growth funds to pursue companies generating $10M or more in revenue - Redpoint and many other firms have sought to invest in startups 24 months or so before an IPO, providing growth capital as startups remain private longer. The return characteristics on these funds enable them to pay higher valuations than traditional funds.

These growth funds are playing in all parts of the market including the Series A and Series B. GitHub, Lynda, and many other startups are bootstrapped and their Series A is a $35M+ round at a multi-hundred million dollar valuation, skewing the results.

With a data set so small and subjectively gathered, there is bound to be bias and error. But I think the flawed data does support the anecdotal trend of rising valuations and enormous variances among top startups at all stages. For these startups, it’s a seller’s market.

How to Optimize Every Decision in Your Life and Accomplish Nothing