Each quarter, a group of analysts, including me, publish analysis on the trends in the venture capital market. There’s a risk to those assessments: the data is incomplete since not all rounds founders close within a quarter are reported in that quarter. I was curious about how much variance exists in the data.

This retrospective analysis compares Crunchbase data from April 1, 2020 to data from October 10, 2020 across three dimensions: round counts, investment total, and median round size. The red lines show data from Q2 and the blue line Q4. 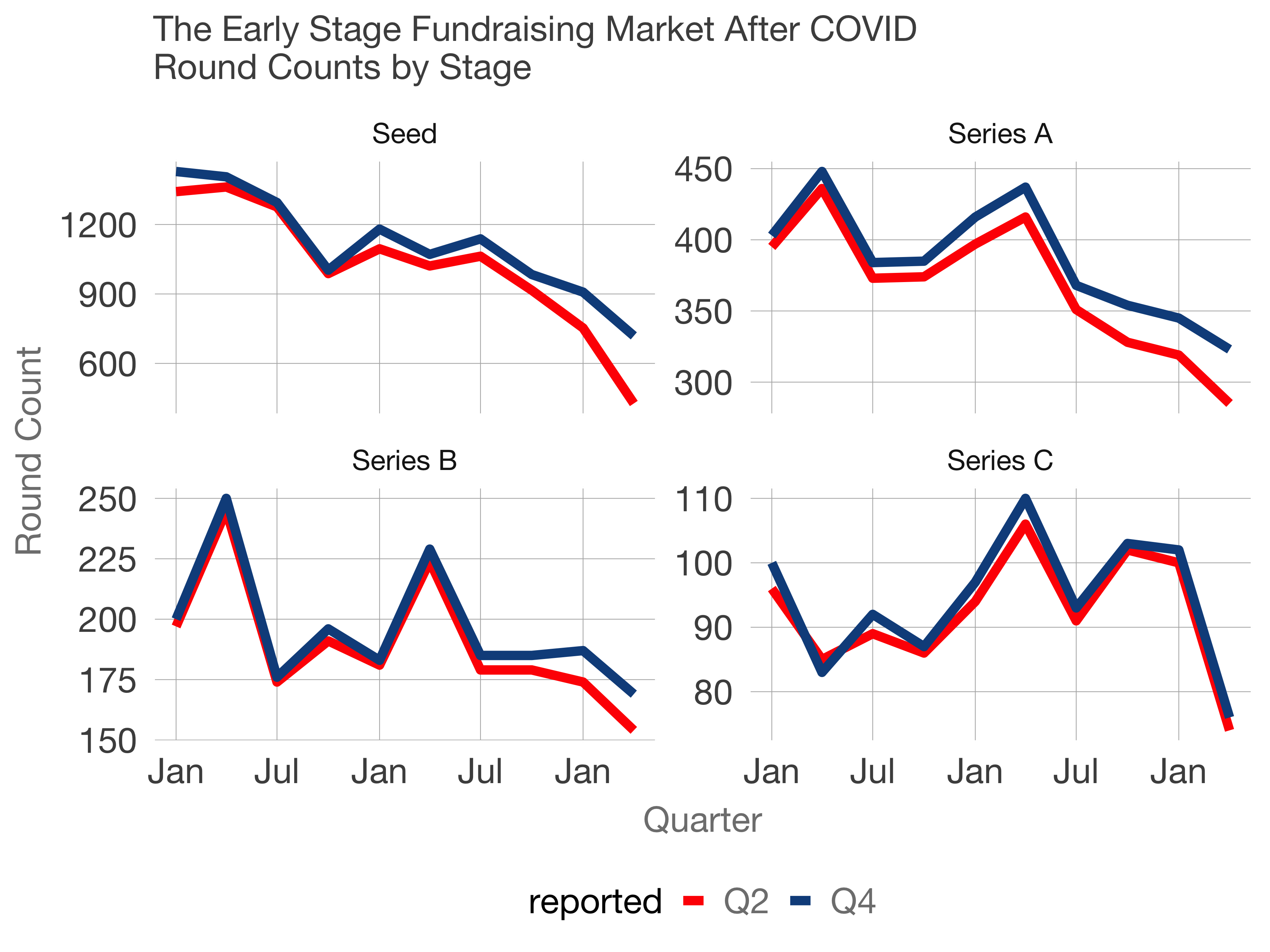 Let’s start with round counts. The earlier the stage, the greater the delta. And of course, the earlier data under-reports the total round numbers. In the seed stage, Q2 data reported 427 rounds compared to 719 in Q4. For Series Cs, the round count increased from 74 to 76.

Let’s look at those on a percentage basis. 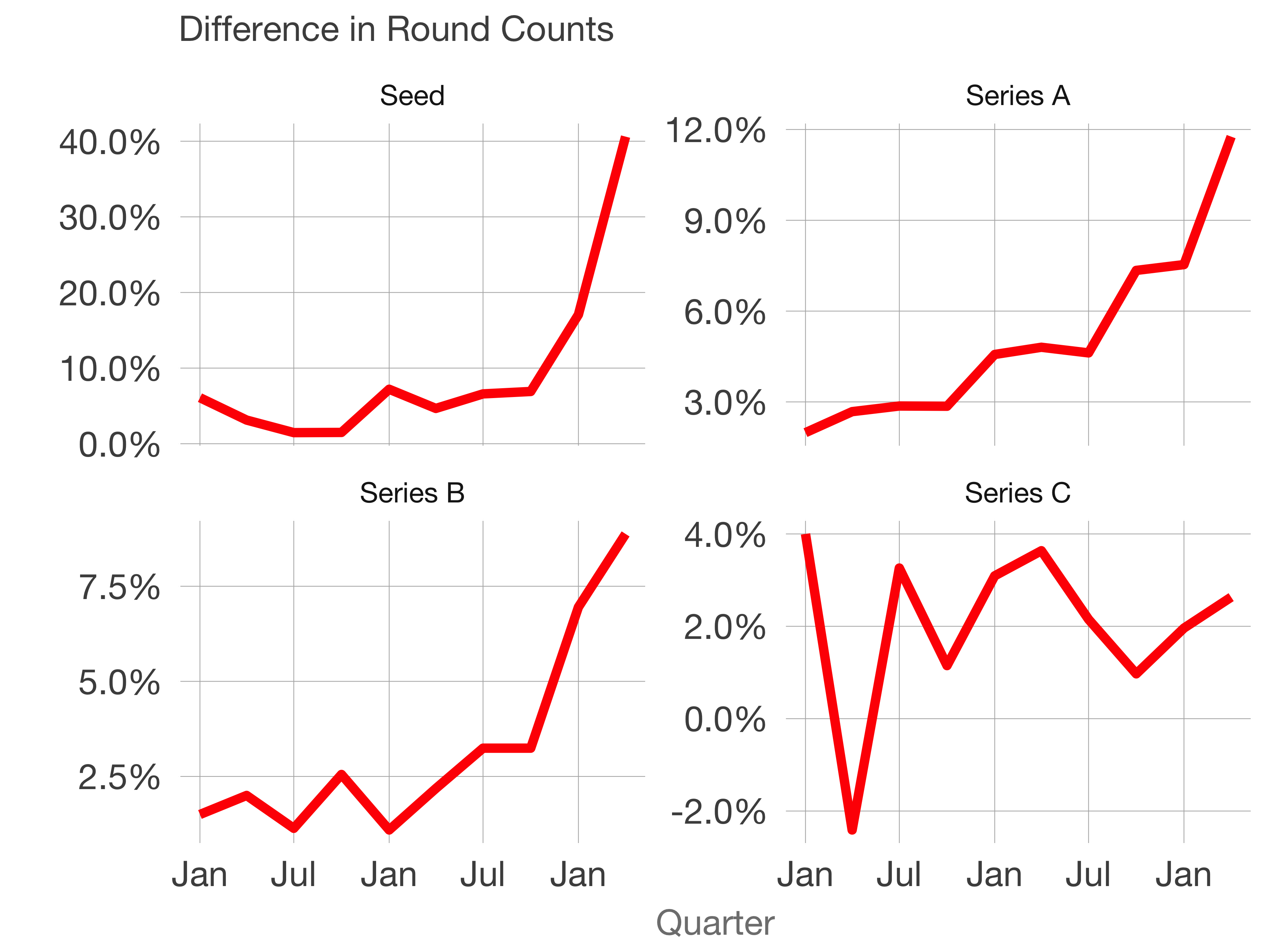 The seed round counts from the day after quarter close counted 60% of the rounds, missing 40%. Series A is 12%, Series B is 10%, and Series C is about 2%. The earlier the round, the greater the likelihood the round isn’t reported. At the seed, it’s basically a coinflip that it will be reported. 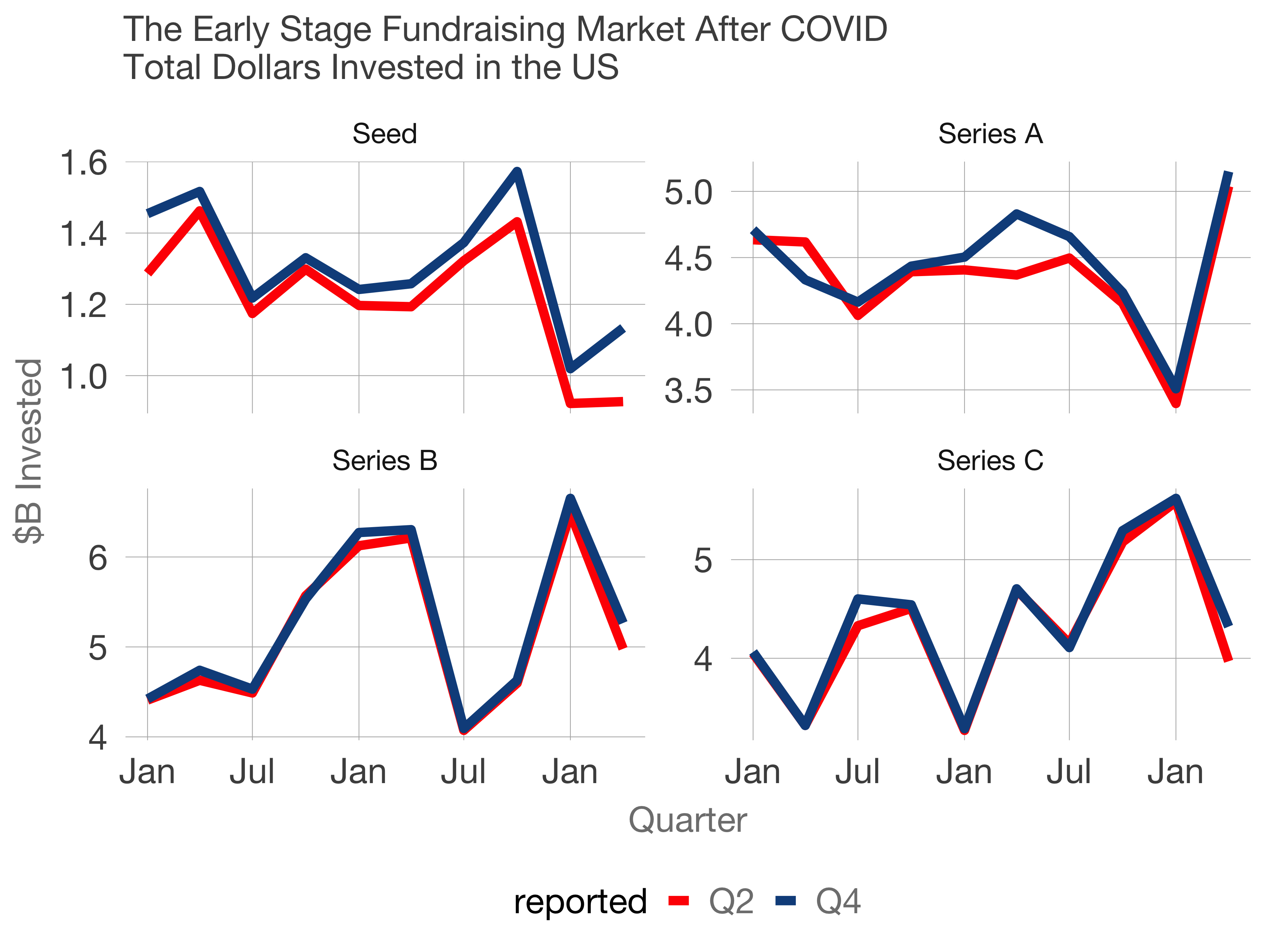 Moving onto total dollars invested, the lines hug each other closely. The total invested in the seed market shows an uptick in the Q4 data. Aside from that, the later rounds have very little whitespace between them, indicating high precision. 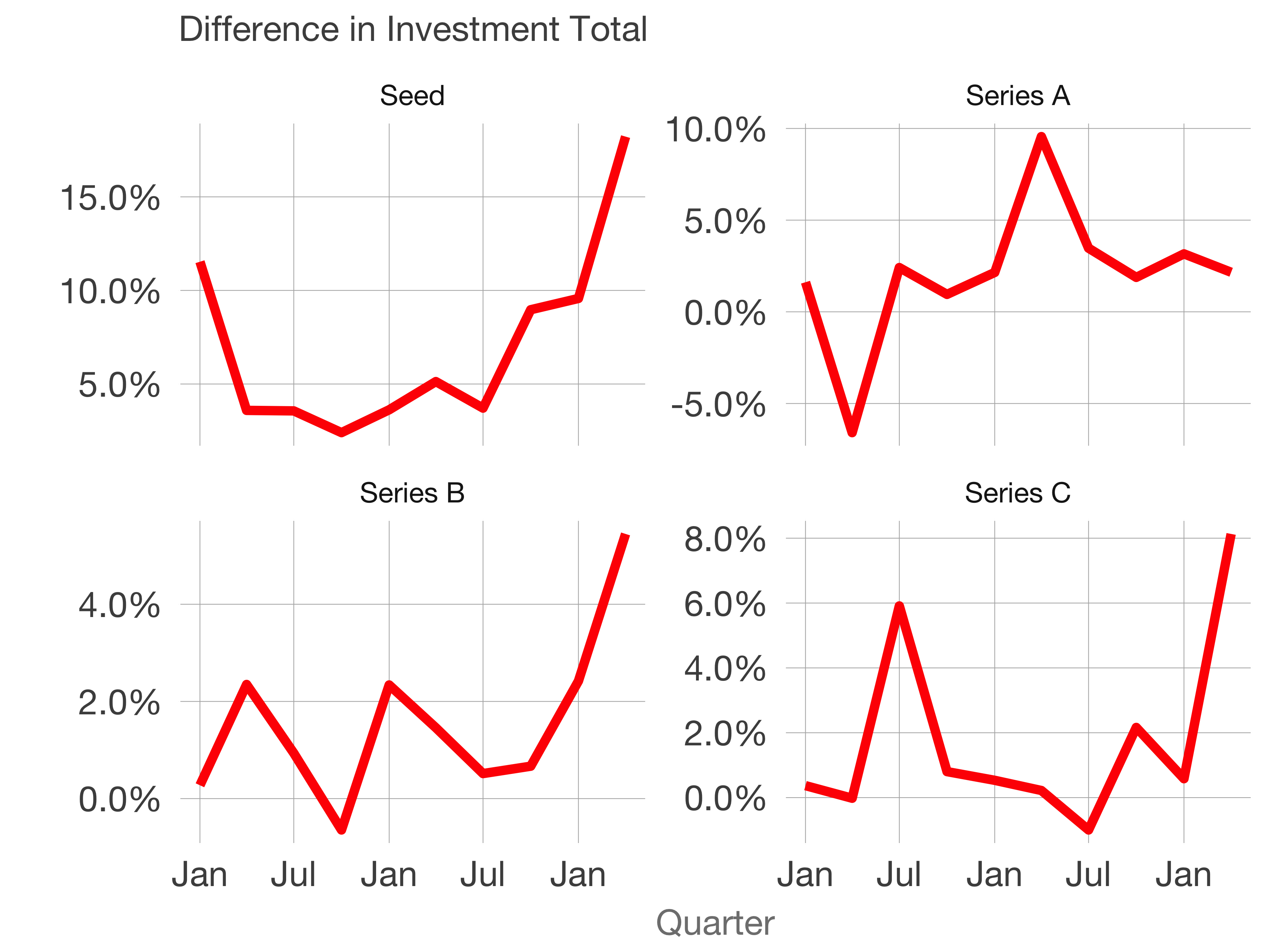 On a percentage basis, the total dollars invested are significantly closer. The delta between the two data sets shows 22% at seed, 2% at Series A, 6% at Series B, and 8% at Series C. Single-digit accuracy is impressive for the speed of the data for A rounds and beyond. Seed inaccuracy persists here. 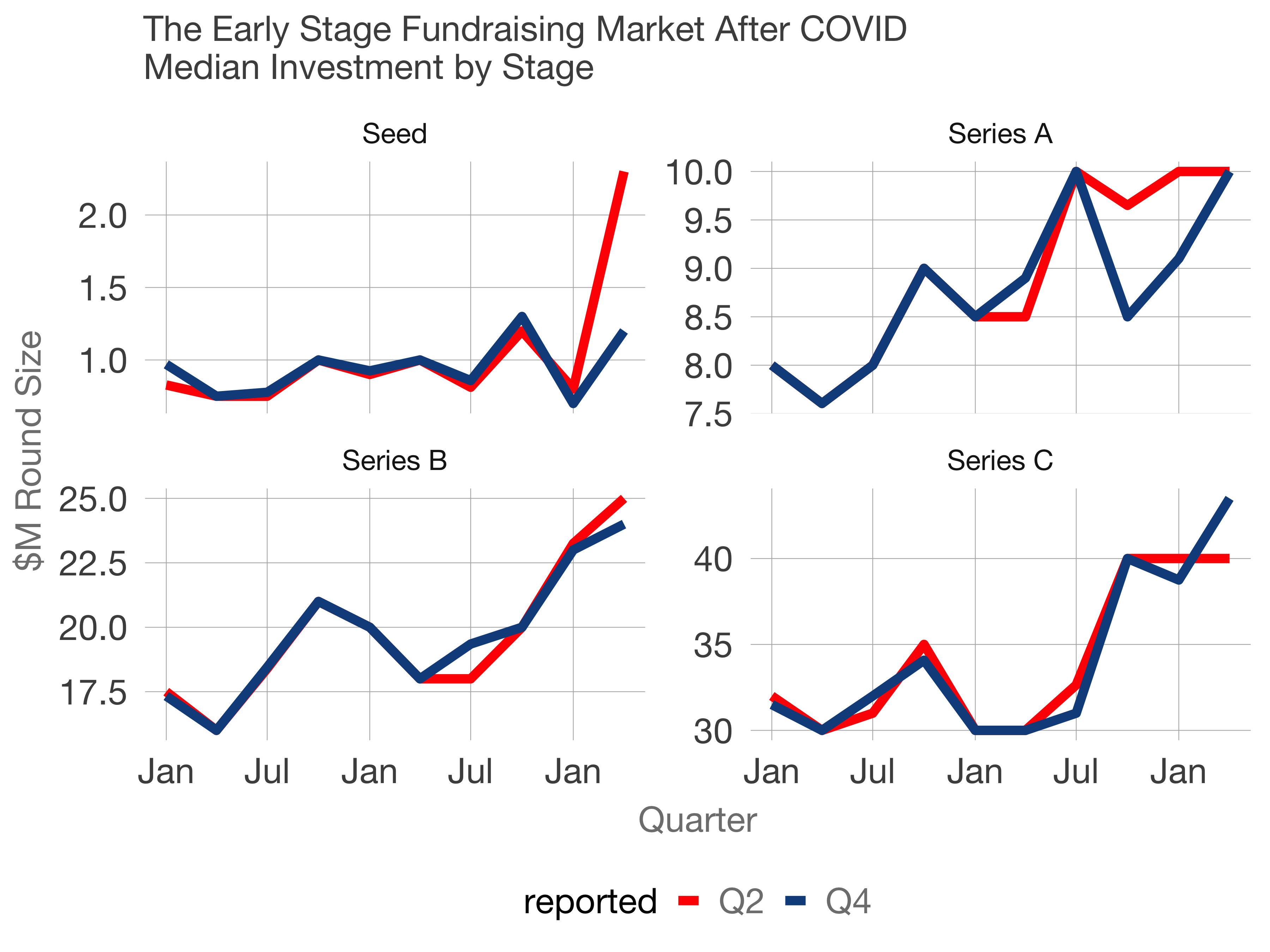 Last is median investment size. The Q2 data showed a massive spike in median seed round size. The later rounds were much closer except for Q3 2019 in Series As. 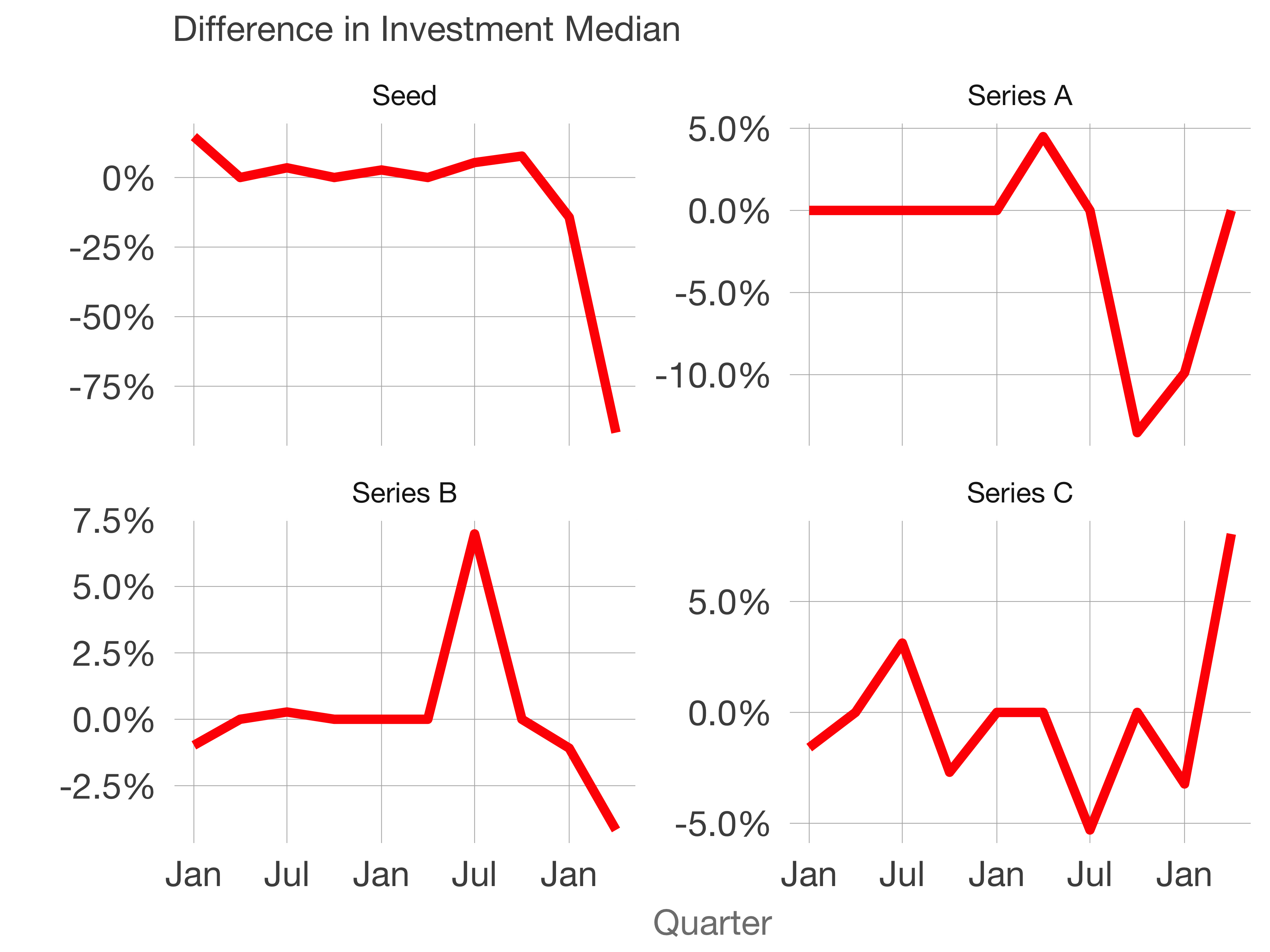 In percentage terms, seed is off the charts. A, B, and C are within 10%. So we have a consistent pattern. Immediate data is within 12% accuracy on the three key metrics for Series A, B, & C. Seed is wild, and any analysis evaluating quarter over quarter trends in the seed market should have substantial confidence intervals around it, or the analysis should wait for a quarter or two to draw conclusions.

The data is skewed because there are many smaller seeds that aren’t reported within the quarter. The bigger seeds are reported, which is the cause of the median seed round spike, and the relatively narrow miss on total invested but huge miss on round counts.

Take heart that these variances also occurred during a period of tremendous background macroeconomic volatility, and still the Series A and later figures are still within 10%. But, take any sequential quarterly analysis on seed trends with a massive dose of skeptical patience. The data is still coming in.