Which Categories of Seed Startups are Thriving? Which Aren't? 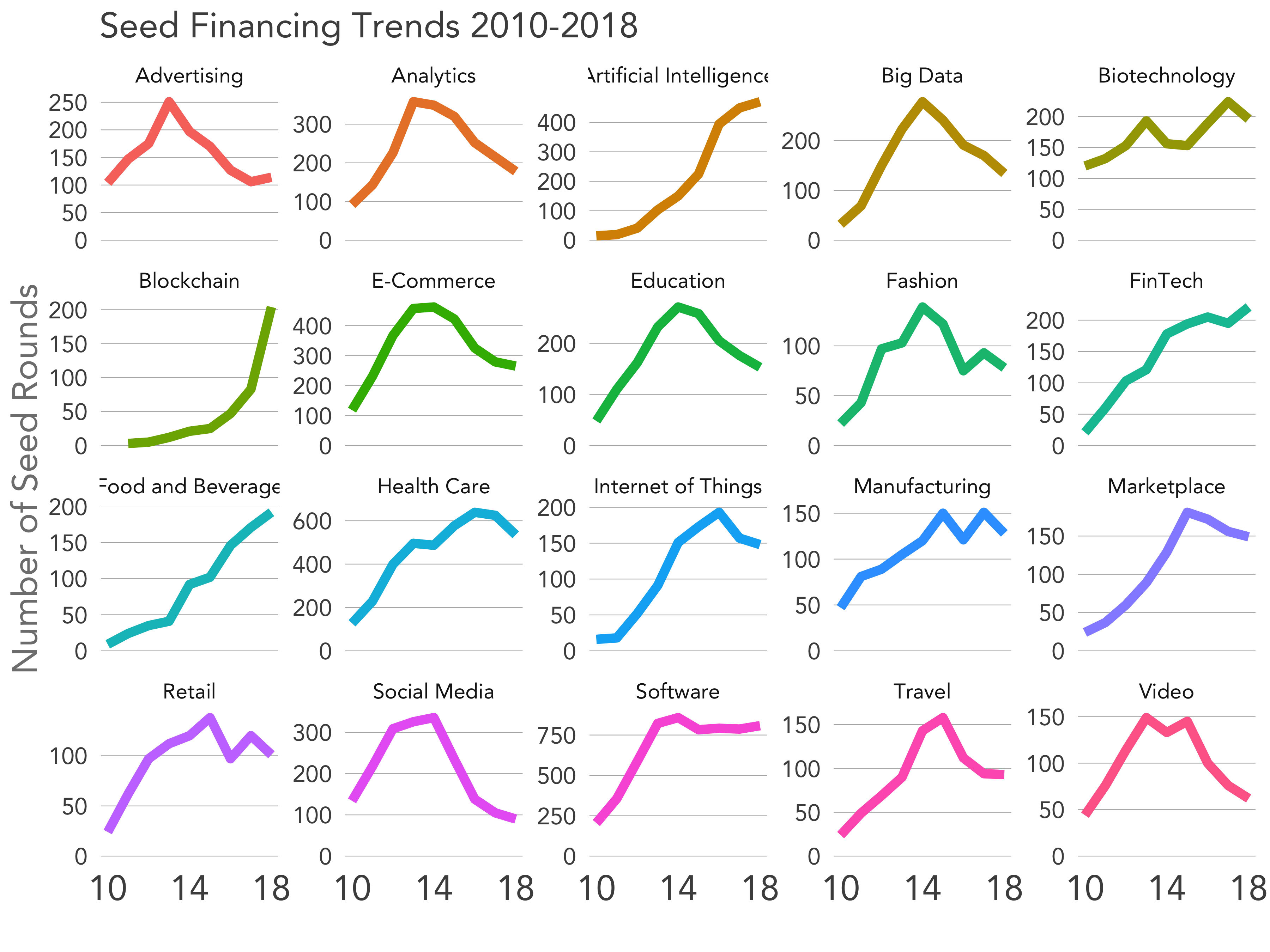 Which sectors see more startup company formation than others? The answer has changed quite a bit over the last 8 years. Some sectors have hit their apogee and are declining. Others have grown by more than 3x. Yet others are growing geometrically. Let’s take a look.

Artificial Intelligence - yes, it’s a buzzword but it’s more than that. AI or Machine Learning is a new technology that will benefit nearly every type of sector and we’re still in the very earliest innings. Eight years ago, there were nearly zero AI startups seeded. Today, that number is 400 and the chart is a classic S-curve, tapering after a period of intense growth.

Blockchain - another exponential curve that shows growth from 0 to 200 startups in eight years. Blockchain is clearly the category with the steepest slope. We can’t predict when the curve will resemble an S, but given the trajectory, it won’t be soon.

FinTech - challenger banks, new electronic stock brokers, AI-powered investment advisors; startups are besieging the incumbents of this regulated world and assailing them in ever greater numbers.

Food and Beverage - the way we eat and farm is evolving quickly. Vertical farming, novel protein sources which replace meats, branded water in a can that resembles beer so you won’t be lampooned at a party. Consumer preferences are evolving and startups are rising to meet the demand.

Software - up more than 3x, Software is a perennial category. Automating expensive internal processes in novel ways is Levi’s 501 jean of the startup world: a stylish classic that will never go out of style.

Advertising - Google and Facebook have dominated the online advertising world. With their end-to-end visibility of the user, publisher and advertiser relationship, few in the ecosystem can compete.

Analytics - surprisingly, this category has seen its zenith. A few winners have emerged. But the recent wave of consolidation (Tableau, Looker, Periscope) suggests more opportunity might beckon founders soon.

Big Data - largely powered by Hadoop adoption, Big Data’s heyday is yesterday. The world has moved on from MapReduce jobs and is reverting to other data sources that speak SQL natively or are cloud-native.

Overall, the data is consistent with our observations on the ground. Many sectors have fallen out of favor, and others have risen suddenly.

A contrarian might found a company in a deflating category; a counter-argument might be to ride the next big wave and start there. Whichever your perspective, the main conclusion is that there’s an incredible amount of opportunity.

The 37% Rule: How to Decide When to Stop Wondering and Start Deciding