Startup Best Practices 15 - Start With the Why 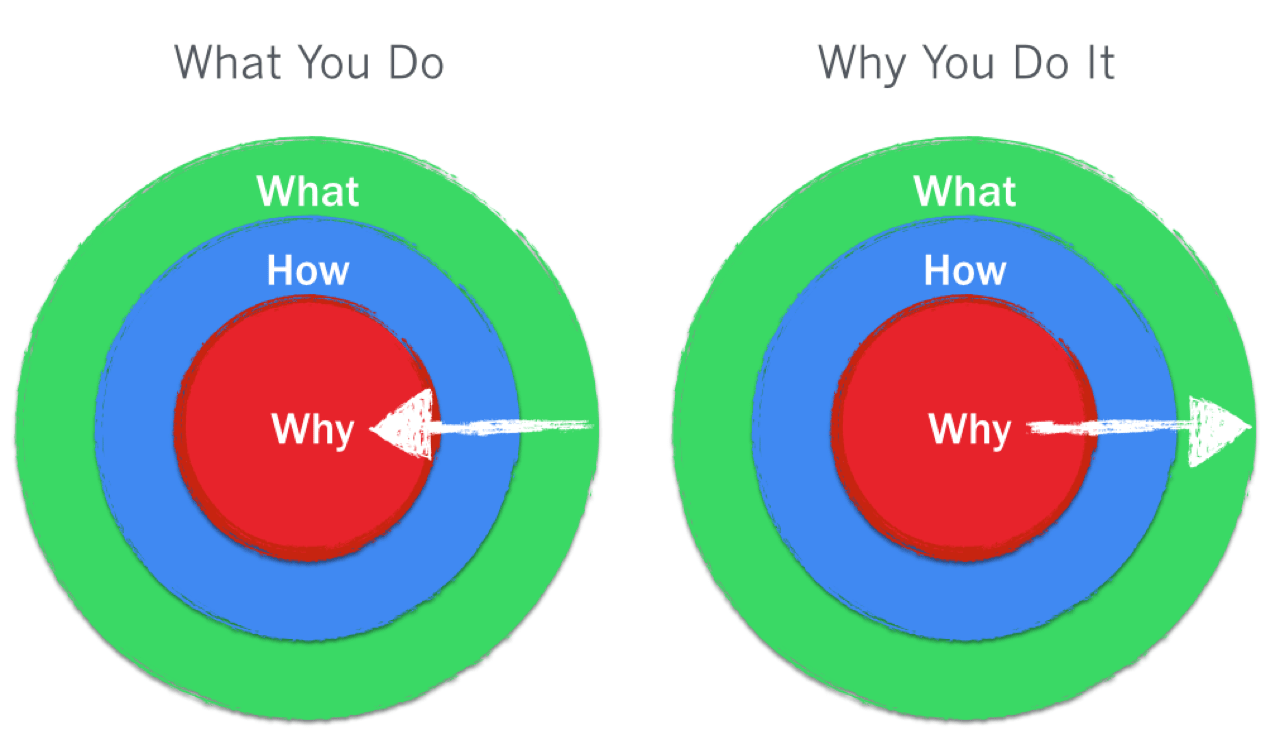 “People don’t buy what you do, they buy why you do it.” This line from Simon Sinek’s TED talk captures the power of a values based marketing campaign. Simon contrasts feature-based marketing - start with what the company is selling continue to how they do it and finishes with why - to value based campaigns which reverse the story-telling order. Values campaigns start with the why.

Starting with why is a simple but powerful framework for startups to develop a unique marketing message, particularly in a competitive marketplace. Starting with why focuses on values which are difficult to emulate, not features which can be copied. Without question product differentiation matters, but it may not suffice in a world where “Customers, generally speaking, see significantly less difference between us and the competition than we do ourselves. It’s not that they think most suppliers are particularly bad on brand, product, or service. It’s just that [customers] don’t think [suppliers are] particularly different.” Source: CEB

Apple embodies starting with why. No surprise, then, that Apple owns the most powerful brand in technology. There’s no better example than the 1997 Think Different campaign whose narrative embraces a set of values and in so doing, inspires us:

Here’s to the crazy ones. The misfits. The rebels. The troublemakers. The round pegs in the square holes. The ones who see things differently. They’re not fond of rules. And they have no respect for the status quo. You can quote them, disagree with them, glorify or vilify them. About the only thing you can’t do is ignore them. Because they change things. They push the human race forward. And while some may see them as the crazy ones, we see genius. Because the people who are crazy enough to think they can change the world, are the ones who do.

Which other computer company embraces rebels? And how many millions identify with that espirit? And once Apple has done it, it’s impossible for any competitor to copy the strategy without being regarded as a pretender.

Similarly, inside each Moleskine notebook, a small, embossed card tells the buyer that a nearly identical journal captured the creative genius of Vincent van Gogh, Pablo Picasso, and Ernest Hemingway. No other notebook can claim that. That card has mooted the traditional competitive axes of cost, size, and paper quality.

There are many other eminent consumer brands who start with why, like Virgin and Nike. While there are fewer in enterprise software, some do exist. Salesforce’s iconoclastic “No Software” moniker tops the list. As Marc Benioff describes in this blog post, he started with why:

A brand is a company’s most important asset. A company can’t “own” its facts. If the company’s facts (speed, price, quality) are superior to the competition, any good competitor will duplicate them, or worse, improve upon them, as soon as possible. What a company can own, however, is a personality. We own NO SOFTWARE—not because we are the only one doing it but because we were the first to think it was important to customers. By consistently delivering an attitude that is future focused and pioneering, we have created a personality.

Starting with why is the Challenger Sale, the most effective sales technique, in a different form. The challenger sale provokes prospective customers to think differently about what they are buying, to focus on something other than features, namely values. And that marketing and positioning, when well executed, uniquely positions a company to win by creating an unreplicable advantage.

This marketing technique applies to competition, hiring, fund raising, and every important sales process for a startup. It’s an invaluable skill to master.